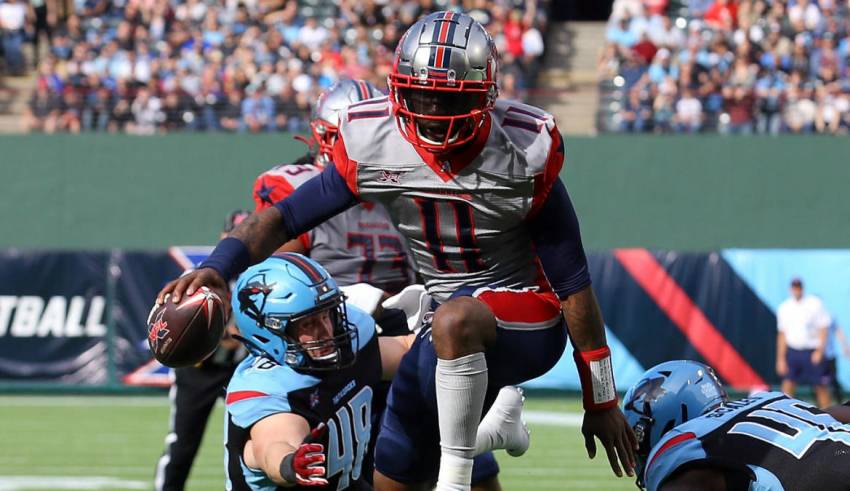 Another weekend down, another wave of stunning XFL developments in the books.

Tampa Bay beating up on our former championship favorite? The Renegades all but begging to be crowned the lesser of the league’s two Texas teams? The Guardians reviving hope for Big Apple success in the XFL?

Week 4 was a wild one. As we approach the midway point of the 2020 season, here are the biggest lessons we learned from this weekend’s matchups:

Sometimes, when we talk startup leagues, people are a little too eager to deem an exciting prospect worthy of the NFL. Sometimes, in response, people are too hesitant to crown someone worthy. Whichever side you might be on, there’s only one right answer when it comes to Walker right now: He’s good, with a capital “G” — so much so that it’d be stunning if he’s not getting calls from NFL teams after the season. He can be fluttery in the pocket, he has some erratic stretches, and he’s not very big, but there’s simply no way to watch him play a 60-minute game and not be wowed. And it’s not as if he’s all highlights, no fundamentals; this guy makes some touch throws to the sideline that some NFL quarterbacks wish they could make. Get him in a training camp. (Or pay up, Houston!)

Speaking of QBs, the general truth in the XFL is that if you don’t have P.J. Walker on your roster, you’re probably not satisfied. But things are especially bad in Dallas. Former NFL backup Landry Jones was hyped as a potential face of this league coming into the year, missed Week 1 with an injury, opened Week 2 looking out of shape, then “turned it on” for an efficient 1.5 starts … until Sunday, when all the issues under the surface bubbled through and Jones turned the ball over four times in less than four quarters. Even worse: There might not be a chance for a rebound, as Jones is set to undergo an MRI for what looked like a serious knee injury suffered against Houston. Their backups: Philip Nelson, an ex-AAF prospect who lost in the opener; and Brogan Roback, a guy best known for sharing a trailer with Baker Mayfield in “Hard Knocks.”

Jordan Ta’amu rounds out the top tier of QBs

Funny how this XFL thing has worked: The big-name veteran QBs who were supposed to keep the league afloat during Year One (e.g. Jones, Josh Johnson) are either hurt or losers thus far, whereas it’s the young, inexperienced, oft-unorthodox young guns who are doing most of the best work under center — Walker, with Patrick Mahomes-like wrist work in Houston; and Ta’amu, with a truly mobile approach in St. Louis. Ta’amu had literally never started a professional football game before debuting with the BattleHawks this year, but boy should they be grateful they turned to him. The guy doesn’t just complete more passes than anyone; he also runs as much as the XFL’s leading ball-carriers, he rarely turns it over, and he’s unafraid to take deep shots. A total package.

Jaime Elizondo may have saved the Vipers

Everyone and their mother was ready for Tampa Bay to can Marc Trestman after the Vipers started 0-2 and looked incredibly incompetent in the process. But then Trestman turned the offensive reins — specifically the play-calling duties — over to Mr. Elizondo, a longtime CFL assistant. Think it made a difference? In Weeks 1-2, the Vipers scored a combined 12 points. Since Elizondo has been manning the offensive game plan, they’ve scored 52. More than that, he’s helped QB Taylor Cornelius look incredibly comfortable, leaning on running backs De’Veon Smith and Jacques Patrick (230 combined yards in Week 4) to rejuvenate Tampa’s entire season.

DC is suddenly and totally dysfunctional

We saved this one for last because it’s too deeply disappointing to endure from the jump. DC opened the year on fire, winning its first two games by a combined score of 58-19. Cardale Jones looked confident. His receiving corps looked pretty clearly like the XFL’s best, or deepest, or both. The secondary was strutting, with ex-NFLers like Rahim Moore making impact plays by the series. Pep Hamilton coached like he knew his roster was championship-caliber. Since then? The Defenders have lost two straight, and they’ve been outscored 64-9 in the process, with those losses coming against teams who have a combined one win over non-DC clubs. To cap it all off, their collective attitude now resembles that of the sorriest, most dispirited, disinterested bunch of the league. You can blame some of their woes on their road trip (going from D.C. to L.A. to Florida in two weeks is a tall task), and every team has hiccups, but when your starting QB walks off the field in a lackadaisical lumber after every failed drive? And then shifts blame to O-linemen, or campaigns for certain wideouts to be benched, while wearing a live mic, in between? Not great. Adversity hits every lineup every season, but if this is what adversity does to DC, then the Defenders are in deep trouble.

Both Ta’amu (327 total yards) and Cornelius (247 total yards, 2 TD) are worthy candidates, especially considering the latter never looked out of sync against a once-vaunted defense in prime time, but Owens was easily the single-biggest factor for his team in an upset of the Los Angeles Wildcats. The former Oklahoma State pass rusher didn’t just sack Josh Johnson twice, but he also hit him an additional two times, logged tackles for loss and blocked a late L.A. field goal try to preserve the New York Guardians’ 17-14 win. If not for him, N.Y. may very well have squandered a prime shot to get back to .500 at home.