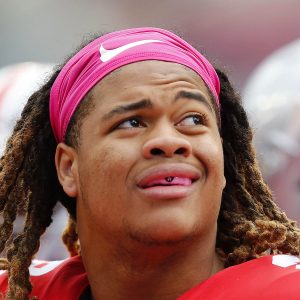 The entire NFL is convinced that defensive end Chase Young won’t fall past No. 3 overall. In fact, none of the teams picking at No. 4 or lower have reached out to the Ohio State superstar, Ian Rapoport of NFL.com (on Twitter) hears.

At this point, it would be shocking if the Bengals did not select LSU Joe Burrow No. 1 overall, followed by the Redskins taking Young at No. 2. Young’s absolute floor would probably be with the Lions at No. 3 overall. The Lions are believed to be targeting fellow Buckeye Jeff Okudah, and would perhaps trade down before trying to nab him, but they wouldn’t pass up the opportunity to take a potential generational talent in Young.

For what it’s worth, Rapoport also hears that the Redskins have “opened up the possibility” of taking a QB at No. 2. Still, that’d be a stunning move given Young’s potential and the presence of Dwayne Haskins. Recently, Matt Miller of Bleacher Report was told that they are not giving real consideration to a signal caller with the second pick.

According to the advanced metrics at Pro Football Focus, Young’s performance has been positively off the charts. His 2019 score slotted him ahead of Josh Allen (Kentucky, 2018), Nick Bosa (Ohio State, 2017), Myles Garrett (Texas A&M, 2015), and every other collegiate edge rusher dating back to 2014.

Young tallied 17 sacks in 2019, the most of any player in the FBS, despite serving a two-game ban.