September 26, 2020
Trending
Home NBA Will the NBA Restart Be Much of a Respite? – The Ringer 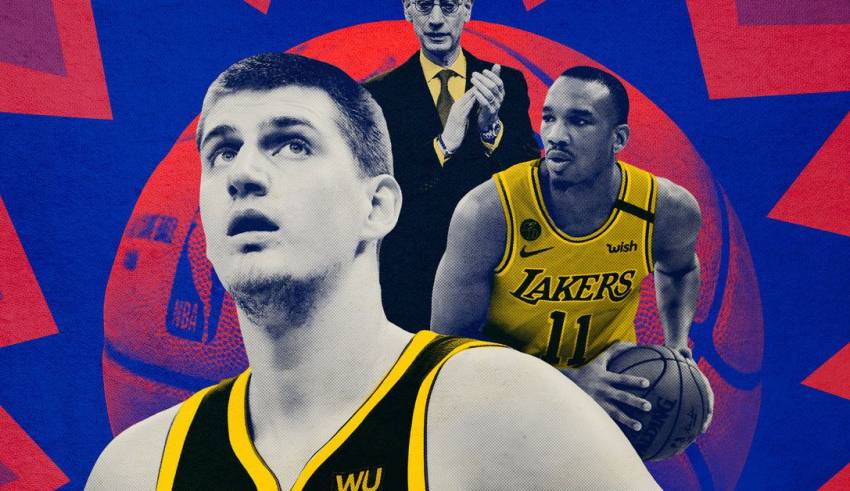 “For us, we feel that this is what we do: We put on NBA basketball,” NBA commissioner Adam Silver said on ESPN 10 days ago when asked about the league’s plan to resume its suspended season. “We think that, for the country, it’ll be a respite [from] the enormous difficulties people are dealing with in their lives right now.”

At its best, NBA basketball can be pure magic, poetry in motion, the salve that soothes your raw nerves; lord knows that, thanks to the combination of the coronavirus pandemic and the country’s ongoing reckoning with the racial justice movement, police brutality, and pervasive structural inequality, there are plenty of raw nerves across the country these days. But with the planned return of the NBA just over five weeks away, the grim facts of America’s ongoing struggle to stem the tide of COVID-19 seem to keep pushing that hoped-for reprieve further out of reach.

Outbreaks of positive tests keep popping up throughout the other American sports that have already resumed or are working toward it. Caseloads in Florida, the NBA’s intended bubble site, keep skyrocketing. The closer the NBA gets to coming back, the harder it is to avoid the creeping suspicion that each passing moment brings the league and its players—who have agreed to wade into these treacherous waters because staying on the shore would cost them more than $1 billion—closer to an ominous other shoe dropping.

The NBA’s 113-page memo outlining the health and safety protocols the league will take to try to prevent players, coaches, and support staff from catching and spreading the novel coronavirus has been praised for its scope and attention to detail. “No plan is perfect,” Zachary Binney, an epidemiologist and professor at Oxford College of Emory University, told Tom Haberstroh of NBC Sports. “The NBA is taking a lot of good steps here.” But the league still needs firm ground on which to take them, and the footing’s getting awfully unsteady in central Florida.

One of the first states to reopen shuttered businesses, Florida has now become one of the nation’s most worrisome coronavirus hot spots, with positive tests and hospitalizations sharply rising in the past two weeks. The World Health Organization has recommended that “rates of positivity in testing (i.e., out of all tests conducted, how many came back positive for COVID-19) should remain at 5 percent or lower for at least 14 days” before a state can safely reopen. In Orange County—home to Disney’s ESPN Wide World of Sports Complex, where the NBA’s “campus environment” will be located—the positive test rate for the week ending June 14 was 12 percent, and the single-day rate on Wednesday was 17.3 percent.

“If the numbers were staying stable or they were going down, I’d have lots of confidence in the plan,” Perry Halkitis, dean of the Rutgers School of Public Health, told Marc Stein of The New York Times. “The numbers going up mean you have a different circumstance now, which increases the probability of transmission and makes the plan—which is excellent but not foolproof—more susceptible to infiltration by the virus.”

The NBA’s first round of testing reportedly turned up four positive tests for one Western Conference playoff team, and two more for a Phoenix Suns squad that was one of the final six additions to the 22-team restart. Nikola Jokic, the All-NBA center who leads the Denver Nuggets, has tested positive; so have Malcolm Brogdon, the third-leading scorer and top assist man for the Indiana Pacers, and Buddy Hield, Alex Len, and Jabari Parker of the Sacramento Kings.

The NBA clearly expected a run of positive tests as player screening began. (It’s like a bad test-prep analogy: COVID-19 infects some people; all NBA players are people; therefore, COVID-19 will infect some NBA players.) As Nick Kosmider of The Athletic notes, the calendar was constructed so that teams would begin testing two weeks before traveling to Florida, allowing those who have contracted the virus to quarantine, receive treatment, and hopefully get clearance in time to participate in training camp and be on the court for the planned July 30 restart.

The concerns might start to mount when affected players actually return to the floor, though. Maybe players who got sick will quickly return to their full pre-illness form. But maybe they won’t; the impact of the disease on a person’s cardiovascular health can be significant. Argentine soccer star Paulo Dybala first tested positive for COVID-19 in late March, and while the 26-year-old forward has returned to the pitch for Juventus of Italy’s Serie A, he recently said he still didn’t feel 100 percent nearly three months later (and after four positive tests). Von Miller, an All-Pro defender with the NFL’s Denver Broncos, told Kent Babb of The Washington Post that after contracting the coronavirus, being laid up for 17 days, and returning to training, he could “still feel [his] lungs trying to get back in shape. It’s just all the wear and tear that it puts on your lungs.” Of note: Miller also suffers from asthma. So do a number of NBA players, including Lakers center JaVale McGee, Nets center DeAndre Jordan, and Rockets superstar James Harden.

The long-term health outlook might be more troubling. ESPN’s Adrian Wojnarowski wrote Tuesday that NBA teams fighting for a playoff spot don’t “believe this restart is worth risking injuries on players that could carry into next season,” and that some will use the resumption as “an extended summer league to develop young players and protect veterans.” But while teams can try to limit sprains, pulls, and soft-tissue injuries as players ramp back up to full speed, those aren’t the only sorts of lingering injuries that players now have to worry about. It remains a very big question just what sort of major, lasting harm COVID-19 may inflict on those who have contracted it.

Affected players could carry problems a lot longer than just “into next season.” So would other inhabitants of the not-quite bubble: Lakers guard Avery Bradley opted out of Orlando because his 6-year-old son has a history of respiratory issues and likely wouldn’t be medically cleared to join him. As Bradley told Wojnarowski, he “can’t imagine making any decision that might put my family’s health and well-being at even the slightest risk.”

We’re hearing that word a lot right now, often in the context of the phrases “risk tolerance,” “risk management,” and “appetite for risk.” Everybody’s got different decision-making factors, and many—perhaps most—players are willing to do whatever needs to be done to hoop, to compete, and to pursue a title, asterisks or not. There’s also the massive motivational factor of making sure that they get paid for the rest of this season, and that they reduce the likelihood that the league’s owners would tear up the collective bargaining agreement.

Maybe this danger shouldn’t register as any different than the ever-present risk of injury players have always assumed whenever they set foot on the court—the possibility that one ugly collision or landing can lead to ravaged ligaments or compound fractures. And maybe it won’t feel that way to everybody, and once the ball goes up, it’ll feel like basketball business as usual, or as close as we can get in these conditions; even after watching the careers of players like Shaun Livingston, Paul George, and Gordon Hayward change in an instant, we don’t spend every subsequent game thinking about the prospective horror of one false step.

This feels different, though. Scarier, and more fraught—a decidedly messier viewing experience than the “respite” that Silver and Co. hope to provide. But again: Everything’s a risk right now, and the counterargument for the “cancel the season” concerns rests in the contingency of it all—the “might,” the “may,” the “could,” the “big open questions” that nobody can answer about a disease that has killed more than 482,000 people around the world.

The reason the NBA is taking the risk is abundantly clear. There was never any way that owners, players, broadcasters, and partners would just forsake staggering sums of money. As one GM told Sam Amick of The Athletic: “You know and I know why we are playing—for the money. If not [for] that, do you really think we would be playing?” On top of that, as Amick notes, the league employs thousands of nonplayers whose jobs would be in jeopardy with no season. It’s possible that, despite the surge of cases in Orange County, the NBA’s combination of precautions and resources will make the Disney site safer than players’ home cities. It is also possible that they won’t be, given that many Disney staffers won’t be staying on the campus and won’t be subject to any coronavirus testing.

Maybe everything will go off without a major hitch—with few positive tests, with healthy recoveries from those who do get sick, with no older coaches or vulnerable staff members falling gravely ill. Maybe we will wind up getting that sigh of relief we’ve been searching for in surprisingly high-quality basketball that reminds us what we’ve been missing, and saves the league as we’ve known it from financial ruin.

Or maybe the players who suit up in Orlando, all of them, are signing up for incalculable risk the likes of which we don’t really understand right now. Maybe the chance is small, but it’s there—on the court, on the television screen, and in the back of our minds. Or, really, the front.