February 26, 2021
Trending
Home NBA What's next for the Milwaukee Bucks? – NBA IN 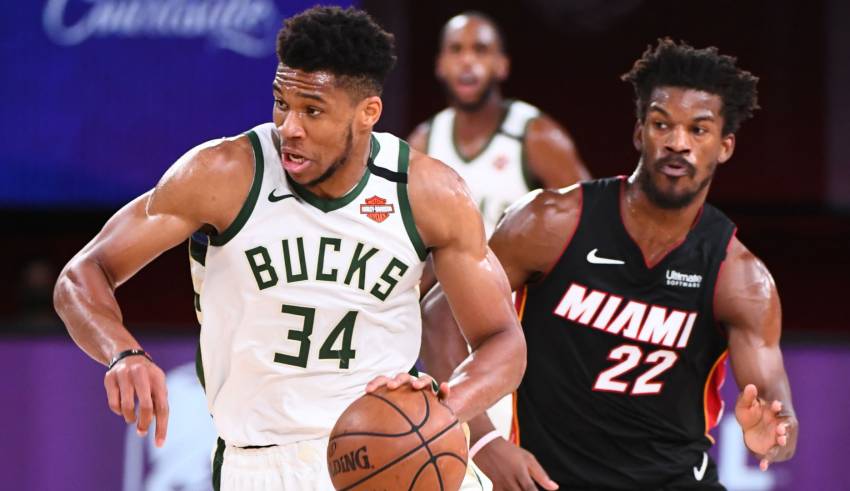 For the second consecutive season, the Milwaukee Bucks entered the playoffs with the NBA’s best record only to once again fall short of their first Finals appearance since 1974.

The Bucks were brushed aside by the Miami Heat in five games, bringing a disappointing on-court bubble experience to a close.

Unfortunately, Bucks fans will be left wondering ‘what if’ in regard to the 2020 season, with a global pandemic halting a barnstorming run through the league just weeks out from the originally scheduled April playoff tip.

On return, the Bucks were never the same, but all the excuses in the book can’t mask the facts: this team was bounced in an eerily similar fashion to the 2019 postseason against Toronto.

What’s next for the Bucks?

Moments after watching his squad be eliminated from the 2020 postseason after sitting Game 5 with a right ankle injury, Antetokounmpo poured cold water on any speculation he could force his way out via trade, prior to potentially testing the free agency waters after the 2021 season.

“Some see a wall and go in [another direction]. I plow through it. We just have to get better as a team, individually, and get right back at it next season.”

Cutting a path of destruction through the regular season, Antetokounmpo averaged 29.5 points in just 30.4 minutes per appearance – the seventh straight season he has seen a bump in scoring since debuting in 2013-14.

If he does claim the MVP as predicted, Antetokounmpo will join Michael Jordan and Hakeem Olajuwon as the only players in NBA history to claim the prestigious award and the Defensive Player of the Year trophy in the same season.

He was able to show growth on the perimeter, bumping his 3-point percentage from 25.6 to 30.4, while also increasing the volume of attempts from 2.8 to 4.7.

Inside the arc, flashes of a mid-range game were also evident, as he showed a willingness to post up and knock down a turnaround jumper, hitting 24 of his 44 tries (54 percent) during the regular season.

At just 25 years old, the potential for further development as a shooter is present, though, the reigning MVP remains more Shaquille O’Neal than Kevin Durant and postseason success will ride or die with his ability to dominate the paint with similar efficiency to that of the regular season.

The narrative that Antetokounmpo struggled to score in the restricted area against Miami in the Conference Semi-Finals is not entirely accurate, as he finished 24-for-32 (75 percent). The problem is more so getting to those spots as the Heat defence walled off the paint and reduced his attempts per game from 10.3 during the regular season to 8.0.

Antetokounmpo miraculously turning into Durant from the perimeter would likely solve the bulk of the Bucks problems, but the more realistic question the Bucks front office should be asking themselves is whether or not the current roster construction is one that can help the MVP bring the franchise its first title since 1971.

What to do with Eric Bledsoe

In two years under Mike Budenholzer, Eric Bledsoe has been awarded All-Defensive team nods. He formed an integral cog in the Bucks’ defensive juggernaut, with his ability to fight over screens and read the offence at an elite level.

It’s that defensive prowess that led the Bucks to sign Bledsoe to a four-year, $70 million deal with the fourth year in 2022-23 partially guaranteed.

With an average salary of $17.5 million per season, the deal is hardly exorbitant in today’s market for an All-NBA defensive guard, though, it’s on offence where the catastrophic problems lie.

For the second consecutive season since inking the deal, Bledsoe has been unable to replicate regular season numbers offensively, with his shooting efficiency plummeting to disastrous levels.

Prior to the Budenholzer hiring, Bledsoe also underwhelmed in the Milwaukee’s 2018 seven-game first-round defeat to Boston, making it three straight playoff failures for the 30-year-old.

The latest performance must come with the caveat that Bledsoe was a late arrival to the bubble after battling coronavirus — an illness that continues to have varying impacts on from person to person. Despite that, the Bucks must now decide whether they can afford to roll with Bledsoe for a fourth consecutive postseason alongside Giannis and simply hope his performance will turn around.

The idea of surrounding Antetokounmpo with four shooters is rock solid and the Bucks remained committed to the ‘let it fly’ mantra throughout the regular season and bubble – they just aren’t great in that area.

The Bucks ranked fourth in the NBA during the regular season for 3-point attempts with 38.9 per game, but they sat 18th in the league for 3-point percentage at 35.5 percent.

As the above table shows, the Bucks’ ability to play with freedom on offence predictably disappeared in the postseason. As the paint was closed down by the Heat defence, the drive-and-kick game was closed and Milwaukee was forced into shot creation – an area they lack.

With Bledsoe struggling, the Bucks leaned heavily on Middleton to bail them out in isolation situations, a problem that was enhanced with the ankle injury to Antetokounmpo.

While they lost the series to the Heat in convincing 4-1 fashion, the margin with five minutes to go in the fourth quarter of each game was never more than seven points, Miami simply closed games with execution the Bucks lacked.

With Jimmy Butler, Goran Dragic, Tyler Herro, and Bam Adebayo, the Heat possessed four players who could initiate and create, while for Milwaukee it felt like it was Middleton or bust.

The priority for the Bucks in the offseason must be to acquire shooters. Not just any shooters however – shooters that can create in the halfcourt. The attention automatically will beam to Chris Paul, though, for obvious reasons that trade will be difficult to execute. Will Jrue Holiday be a trade target? What about Patty Mills to give the Bucks the sparkplug off the bench they have lacked at times? Could Joe Harris be the elite shooting threat they target for the offseason?

With so much salary tied to the starting group and Hill, maneuvering their way through this critical offseason will be difficult, but for the second season in a row, the Bucks have been eliminated in eerily similar fashion.

As long as Anteokounmpo is in Milwaukee, the Bucks are going to be a dangerous team, it’s as simple as that.

Holding a 116-39 regular season record over the last two seasons, Budenholzer has trust in his system for good reason, but consecutive playoff busts mean something will need to change.

The Bucks are walking the tightrope with their immediate future of title contention hinging on the Antetokounmpo decision but ultimately they will no longer be judged by regular season success, the proving grounds will be in the 2021 postseason.

The pressure is mounting.

The views on this page do not necessarily reflect the views of the NBA or its clubs.