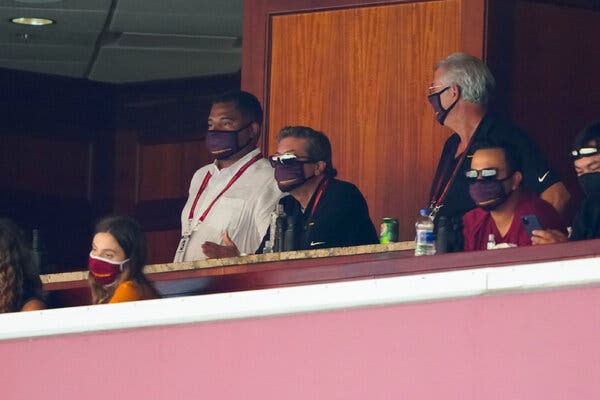 The bitter boardroom brawl between Daniel Snyder, the controlling owner of the Washington Football Team, and three of his longtime limited partners has prompted a legal firestorm, a fight over the club’s name and mudslinging among former friends.

But at its core, it is a dispute over money.

In the spring, with the future of the 2020 N.F.L. season very much in doubt because of the pandemic, Snyder deferred paying annual dividends to three shareholders who collectively hold 40 percent of the franchise, according to documents reviewed by The New York Times.

The decision to withhold the distribution, which was due on April 30 and which the partners claim was made without consulting them, triggered a series of accusations that include financial mismanagement of the team and efforts to smear Snyder. The fight between Snyder and the shareholders — Frederick Smith, the chairman of FedEx; Dwight Schar, founder of a home building company; and Robert Rothman, an asset manager — eventually landed in the league’s lap, and an arbitrator is trying to sort out the dispute.

The behind-the-scenes jockeying hovers over the turmoil that has engulfed the team. After years of defending the team’s 87-year-old name, Snyder relented to pressure from Native American groups and some of his biggest sponsors — including FedEx — and said the team would be renamed. Ron Rivera, the new coach who has been trying to rebuild the team during the pandemic, said in August that he planned to continue doing his job through cancer treatment. Snyder hired a top lawyer to investigate allegations of sexual harassment made by 15 women who worked for the organization.

For much of the spring and summer, the fight with the limited partners took place behind closed doors. In May, less than two weeks after the partners were supposed to have received their dividends, the chief financial officer for Schar Holdings wrote to the Washington Football Team’s legal counsel and asked why Snyder had decided not to pay the distribution and not tell the partners in advance. Schar, his company’s chief financial officer said, “is quite disappointed by such a lack of communication.”

The financial officer requested documents regarding the team’s financial performance, including financial statements for the past two seasons, details on wages earned by team employees, budget projections for this year and information on “all cost-cutting measures” since 2018, presumably to determine whether the team was managing its money efficiently.

It is unclear how much money the three limited partners were owed, why Snyder delayed payment of the dividends, or whether he notified them in advance. It is also unclear whether Snyder undertook some or all of the cost-cutting measures that Schar asked of him.

Still, soon after Schar’s lawyer asked for the team’s financial records, Schar and Rothman joined Smith — who had been trying to sell his shares since last year — and put their shares on the market as well. They, too, hired John Moag, a sports banker in Baltimore, to help them unload their stakes.

In normal economic times, selling the minority shares would be difficult because the buyers would have little control over the management of the team despite having spent tens and even hundreds of millions of dollars for an ownership stake. The economic uncertainty created by the pandemic has made the task even harder.

If the Washington Football Team or another franchise was sold in its entirety, the value of the minority stakes would fetch a much higher price.

If Snyder wanted “to avoid an expensive and lengthy due diligence process and detailed review” of the team’s books, Koche said, Snyder should think about buying out the three partners “at fair value.”

“Accordingly, it would seem worthwhile for Dan to consider putting forth his best efforts to lead the buyout effort” and “proceed to an amicable and expedited closing on the sale of my clients’ interests,” Koche wrote.

When reached by phone, Rothman also declined to comment. “I don’t want to be rude but I cannot comment at this time,” he said.

Snyder does not need to buy out his partners because he already holds a majority of the team. He also has no plans to sell his stake, which he expects to leave to his children, according to several people who have spoken to him.

Still, Snyder was disappointed by the decision by Schar and Rothman — his friends and business partners for nearly 20 years — to hire a banker to sell their shares. In mid-June, he threw all three limited partners off the team’s board.

The three shareholders, upset about being removed from the board, asked the N.F.L. to settle the dispute. The commissioner’s office appointed an arbitrator in late June, according to two people familiar with the matter who were not authorized to speak publicly. The N.F.L. declined to comment.

That is when the war spilled into the public. Days after the N.F.L. arbitration was set into motion, the legal counsel for FedEx, where Smith is chairman, sent the team a letter saying the company would demand that its name be removed from the stadium, where it has been displayed since 1999, if the team’s name was not changed. FedEx pays about $8 million a year for the naming rights to the team’s stadium in Landover, Md. Less than two weeks later, Snyder announced that the name and logo would be replaced.

As the boardroom drama unraveled, the fight began to make its way through the courts and is slowing efforts by the minority partners to sell their shares. In August, Snyder filed a defamation suit against an Indian internet company that published what he claims are false and defamatory stories about him.

Connected to that lawsuit, Snyder’s lawyers asked a judge in United States District Court in Maryland on Sept. 15 for the right to subpoena the phone and internet records of Moag, the banker for the limited partners.

In the filing, Snyder’s lawyers claim that in early July a representative from Moag’s company called a potential investor to see if he was interested in buying a minority stake in the team. The representative claimed that Snyder would be selling his shares soon.

When this person said he was skeptical that Snyder would sell his majority stake in the team, Moag’s representative said that Snyder “would have no choice but to do so soon thereafter due to negative information that would be released imminently,” according to the court filing.

A week later, on July 16, Snyder and his football organization were the subject of a mountain of bad press. The Washington Post published an investigation into the mistreatment of the team’s female employees, citing 15 former employees of the team’s front office as sources.

The same day, articles disparaging Snyder, including one that linked him to the sex criminal Jeffrey Epstein, appeared on the Indian website.

The next day, Moag spoke with a different person and suggested that Snyder “would be forced to sell his shares due to further upcoming negative press,” according to the court filing.

In succeeding days, information from both the Washington Post article and the Indian website’s articles that linked Snyder to Epstein was repeated on social media.

“For all the foregoing reasons, it is apparent that Moag had advanced warning” of the articles published by the Indian website, Snyder’s lawyers wrote in the filing.