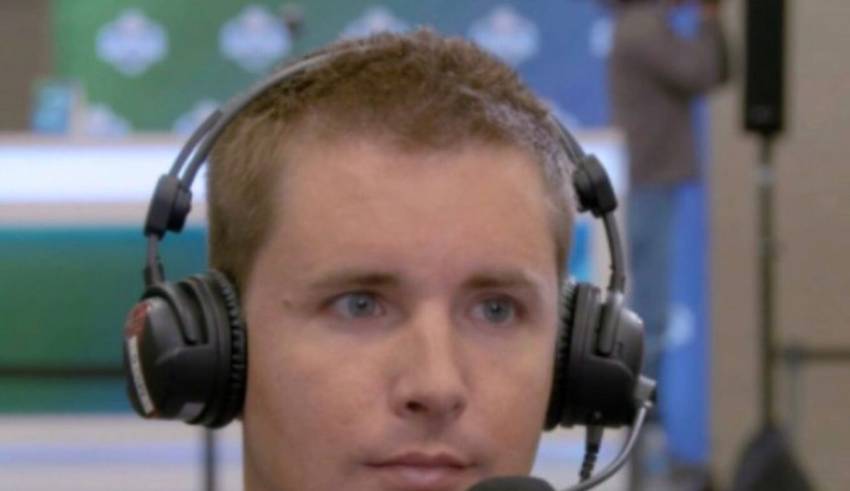 CLEVELAND, Ohio – Most local NFL fans have been hearing Dane Brugler talk about the NFL draft for years, mostly on area radio stations.

If you were to make a Mount Rushmore of NFL media draft experts, there would be ESPN’s Mel Kiper Jr. and Todd McShay. At NFL.com, Daniel Jeremiah has taken over for Mike Mayock (now GM of the Las Vegas Raiders). Perhaps you’d add another name such as Dan Shonka of Our Lads, one of my favorites.

But climbing that media mountain is Brugler, a graduate of Mount Union who never played football in high school or college.

The Warren J.F.K. High product didn’t have family connections to coaches or front office people in the NFL.

In fact, when you listen to Brugler’s story, it’s hard believe he’s found a way to make a living built on the NFL draft since 2013.

It’s a testimony to his passion and endurance.

HE WROTE ‘THE BEAST’

At the age of 33, Brugler is a respected NFL draft expert. He has turned down a few chances to work for NFL teams because he’s married with two young children.

He prefers staring at mind-numbing hours of video of players at his home rather than being locked away for 12-to-15 hour days at an NFL team office.

This year, his epic 250,000-word draft report is out and known as “The Beast.” It’s available on The Athletic website, where Brugler is a full-time member of the staff.

That’s right, a quarter-million words on the 2020 NFL Draft. He has reports on 420 players. He ranks 60 QBs, the last one on the list being Mount Union’s D’Angelo Fulford. Perhaps that’s a tip of the cap to Brugler’s alma mater.

“The first time I talked to Dane about working in our Sports Information Department, he showed me his NFL draft guide,” said Michael DeMatteis

DeMatteis was the Mount Union sports information director for the Alliance college with the powerhouse Division III football team.

“Dane was 18 years old and he had already written a draft guide,” said DeMatteis. “I have been around a lot of good young people in my career, but I have never seen anyone as focused on a single goal as Dane with wanting to evaluate players for the NFL draft.”

In 2007, the Purple Raiders had a NFL prospect named Pierre Garcon. The wide receiver later would have an 11-year career.

“Lots of scouts came in and I was able to take them around to meet Pierre and the coaches,” said Brugler.

He talked to them about scouting, and how you become a scout. Many were anxious to discuss their jobs, and they came from different backgrounds.

There’s no formal scouting school. But he made the best of it at Mount Union, where he graduated in 2008.

“Early on, I told Dane not to be in awe,” said DeMatteis. “These guys aren’t all geniuses. Look at their drafts! They are wrong half the time.”

“He had Johnny Manziel rated as a second-rounder,” said DeMatteis, laughing. “I told him, Johnny would be a disaster.”

IT’S WHO YOU KNOW… SORT OF

Brugler consistently put himself in position to know people who already were “in the know” in terms of scouting.

After graduating from Mount Union, he went to work for the Class AAA Frisco Roughriders. A couple of his Mount Union friends already had jobs in the front office.

He later worked in public relations. But he paid his own way to the NFL Combine, to the Senior Bowl and to various Pro Days held on college campuses.

Scouting is a lonely profession. and scouts like to talk, tell old scouting war stories. Brugler was a good listener. He was a willing go-fer. Word spread. He was a nice young man. He got to know Gil Brandt, the legendary Dallas talent evaluator.

He met media people. He learned by listening and doing small assignments that eventually grew a little bigger. At the 2011 NFL Combine, he helped legendary NFL writer John McClain of the Houston Chronicle. That opened more doors.

Remember, he paid his own way to these events. He wasn’t making much money in public relations.

He was still producing his little draft guide, selling it online. He eventually landed a job with NFL Draft Scout and CBS Sports. By 2013, between those jobs and his draft guide, he was making enough to leave public relations behind.

“At times, it was really hard (financially),” he said. “But then something would come up. I went to The Athletic in 2019 and that’s really helped.”

After living in Texas for several years, Brugler has moved to Warren, Ohio.

“My wife (Stephanie) and I are both from here,” he said. “We want our kids (Kegan and Kara) to grow up near their grandparents.”

Brugler has been able to live his dream, especially now back in his hometown.

All I wanted to do was scout players since the 1999 draft when I was 13,” said Brugler. “The big debate about taking Tim Couch.”

The Browns had just come back as an expansion team. Brugler found himself obsessed with Mel Kiper’s ESPN draft reports and others talking about the draft.

“I always thought I could do that,” he said. “I could scout and rate players.”

Turns out, he was right.

Question: If the Browns could pick anyone to fill the hole at left tackle, who is the best choice?

Answer: “I’d go with Wirfs, although I have Wills (a right tackle) as my No. 1 tackle and I think he can play left tackle,” said Brugler.

Terry’s Talkin’ Browns: Is Kevin Stefanski being set up to succeed?

How Browns can (maybe) stop the run…Scribbles!

Does adding extra playoff team give hope to Browns?

Hey Terry, How about Puig, Salazar & the Tribe?

Should the NCAA replay the 2019-20 basketball season?

Case Keenum can still play, and that matters a lot

What are the Browns doing in free agency?

Browns Scribbles: What else are they looking for?