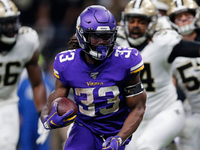 Win or lose Saturday in NFC Divisional Round matchup with the 49ers, Vikings standout running back Dalvin Cook is likely to find his way to a payday in the offseason.

With the final season of his current contract in 2020, Cook and the Vikings are likely to explore a long-term extension, NFL Network Insider Ian Rapoport reported on Saturday.

Though Cook, who earned just more than a $1 million this season in base salary, missed a couple of games during the regular season, he still produced far and away his most productive season since Minnesota selected him in the second round of the 2017 NFL Draft.

Having played in just 15 games over his first two seasons combined, Cook was stellar in 14 starts this year. He ran for 1,135 yards and 13 touchdowns and added 53 receptions for 519 yards in earning his first Pro Bowl trip.

Having become the Vikings‘ first 1,000-yard rusher since Adrian Peterson in 2015, Cook might well be signing on in Minnesota for the long haul.