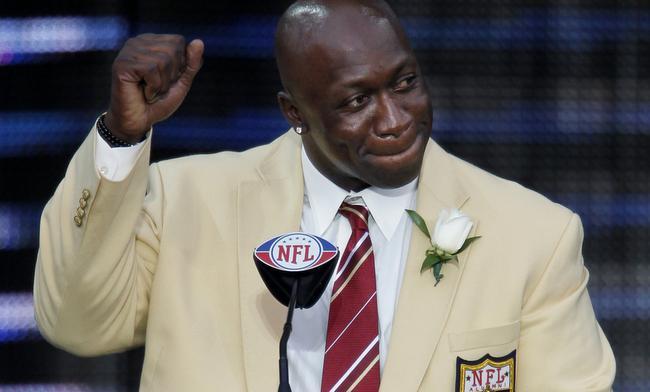 What was John Randle’s initial reaction to being named to the NFL 100 All-Time Team?

Not surprisingly, that didn’t last long. While starring for the Vikings from 1990-2000, the defensive tackle was well known for non-stop running of his mouth.

Randle, who closed out his career with the Seattle Seahawks from 2001-03, was announced Friday, along with fellow Vikings hall of fame defensive tackle Alan Page, a member of the legendary team that is being unveiled during the NFL’s 100-year anniversary celebration.

“It’s a wonderful honor to be associated with men who built this game and to be mentioned with those guys is just so humbling, so unbelievable,’’ Randle said Saturday in a phone interview.

Randle, 51, learned about the honor in early November when he was at the league office in New York as part of his role as director of the Central-North Region for the NFL Legends Community.

“The commissioner (Roger Goodell) told me,’’ Randle said. “At first I didn’t believe him. At first, it caught me off guard. It wasn’t something that I set out for when I started to play this game. I never set out to make the Pro Bowl or try to to go to the hall of fame or get this honor.’’

Randle said he was just trying to make the team when the Vikings signed him in 1990 as an undrafted free agent out of Division II Texas A&M-Kingville. The 6-foot-1 Randle weighed 240 pounds as a rookie before eventually beefing up to 290.

“You couldn’t write this stuff,’’ said Randle, said of his career. “Where are you going to start? You’re an undersized free agent and you’re going to a team that nobody really expects you to make, and then you’re playing special teams (at the start).’’

Randle didn’t start any games as a rookie. But after he moved into the lineup, he made six of his seven career Pro Bowls and had all six of his all-pro selections with the Vikings. He ranks 10th in NFL history with 137 1/2 sacks

Randle flew to Los Angeles to appear Friday night on an NFL Network reaction show to 14 defensive linemen and 12 linebackers being named to the all-time team. Running backs on the team had been announced Nov. 22, and the team will continue to be unveiled on Fridays through the remainder of the regular season.

“I’m so proud to make this team because it’s the first 100 years of the NFL,’’ said Randle, who returned Saturday to his Twin Cities home. “Wow. There won’t be another one for 100 years. I think back to all the hard work and all those days of skipping things like hanging out with friends in order to dedicate myself to playing football and by trying to be the best at a position.’’

Randle was thrilled to have been named to the team alongside Page, who played with the Vikings from 1967-78 before finishing his career with the Chicago Bears from 1978-81.

“When I got (to the Vikings), I heard all the stories about the Purple People Eaters and everybody talked about Alan Page, and the unbelievable things he did and how he played,’’ Randle said. “And just to be mentioned with the likes of him, I can remember one of the first times I played a the Metrodome and listening to Alan tell me about what those guys did and how they played.’’

While both were legendary defensive tackles, Page and Randle had different temperaments on the field. While Page was much more restrained, Randle was known for his non-stop chatter.

Clips of Randle running his mouth on the field are regularly shown on NFL Network. Yet Randle insists he’s hardly always like that.

“I don’t really like watching myself because I’m embarrassed,’’ Randle said. “That person who I was when I played is the opposite of how I am off the field. So it’s kind of unique (watching the footage). It’s like you’re a different person, but I appreciate the 14 years I spent in the NFL and it helped make me who I am today.’’

Randle has continued to live in the Twin Cities since his retirement, and has regularly been involved in Vikings events. Minnesota plays Monday at Seattle, but Randle said there’s no question who he is rooting for even though he did finish his career with the Seahawks.

“I’m all Vikings because the Vikings are the organization that when I first came out of college and nobody wanted me, they gave me a chance,’’ Randle said. “I’m loyal all the way for my purple. I bleed purple. I believe in it. That’s my team. In my later years, I want to Seattle, but I’ll always be a Viking.’’