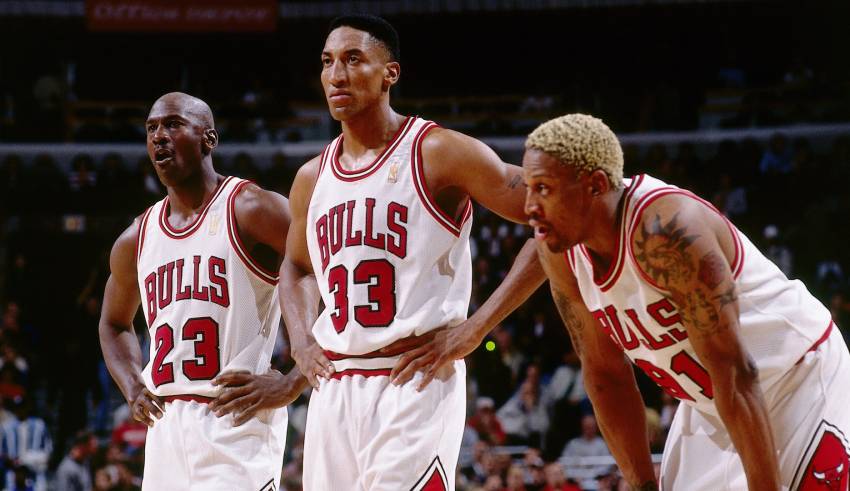 Relive some great plays and moments from the 1995-96 Chicago Bulls’ historic 72-10 season.

NBA.com takes a look back at the top moments that define the history of the NBA.

The honor of being recognized as “the greatest team in NBA history” is one fans can debate endlessly, but supporters of the 1995-96 Chicago Bulls could point to one objective yardstick in making their case.

The Bulls finished 39-2 at the United Center and 33-8 on the road, their 33 road victories the most ever. They continued to steamroll the opposition in the playoffs. They lost only one game in series wins over Miami, New York and Orlando, setting up a Finals matchup with Seattle.

Michael Jordan was back in the NBA Finals. After an eighteen-month layoff from basketball, a brief dip into a professional baseball career, and a comeback which fell just short of the 1995 NBA Finals, he wasted little time putting Chicago in position to win a fourth championship. Chicago won the first three games, before Seattle rallied to send the series back to the United Center for Game 6.

Back at home, Jordan gave the Chicago fans what they came to see. He responded to the 87-75 clinching win by falling to the court as tears streamed down. He then rushed into the Bulls’ lockerroom, where he allowed more of the emotion he’d kept bottled inside to come spewing forth while his teammates celebrated.

Though he had returned to lead the NBA in scoring with 30.4 per game, and had been named NBA MVP for the fourth time, it was by leading his team to the title he’d proven to himself that he could come all the way back. Coincidentally, the Bulls wrapped up the title on Father’s Day, an important day to a man who’d lost his father, James Jordan, before suddenly retiring from basketball in 1994.

“I was blessed to be able to get the game ball of the championship game and bring a championship back to Chicago,” Jordan said later. “It happened on Father’s Day, which makes it even more special. There’s no way to really describe it.”

By the time Jordan rejoined the Bulls’ celebration, the entire team was perched atop the scorer’s table, sharing their moment with the United Center fans. They then moved to a podium in front of the table, where commissioner David Stern presented team owner Jerry Reinsdorf with his fourth championship trophy in six years. And somewhere down the line, Jordan got the trophy and hugged it. His trophy.