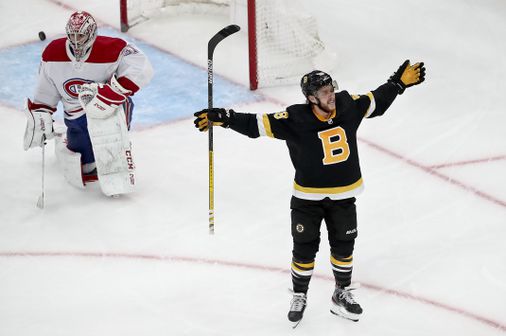 He may not be as big or strong as Jagr, a fellow Czech (age 47 and still storming off the wing back in hometown Kladno), but the sinewy, hard-shooting Pastrnak has emerged as the game’s most feared goal-scoring force, a shoo-in to break the 50-goal plateau in his sixth NHL season. Jagr, by the way, needed until his sixth NHL season before he first wired in 50, in what was a far more offensive era and with the prolific, legendary Mario Lemieux typically his distributor.

Jagr finished with 62 that season (1995-96) and reached the plateau twice more. Milan Hejduk, of the Usti nad Labem Hejduks, is the only other Czech-born player to connect for 50 in the NHL.

Headed into Tuesday night’s Garden matchup with the Hurricanes, Pastrnak was pegged at the top of the NHL chart with 25 goals in 27 games — a blistering pace in lockstep with the career-high 76 Phil Esposito potted (76-76—152) in 1970-71. The only other guys shopping in Pasta’s neighborhood this season are Alex Ovechkin (20), Connor McDavid (19), teammate Brad Marchand and Leon Draisaitl (each with 18).

The guy who sounds the least impressed by all this? No surprise, Pastrnak.

“I don’t look at it, I just play my game,” he said a week ago, in the minutes after he poured in three more — for his sixth career hat trick — against the Habs at the Bell Centre. “That’s not my focus — hockey’s a team sport and that’s all that matters to me. Obviously, I read newspapers, and you see that stuff, but focusing on that is definitely not at the top of my list.”

Yep, all that and . . . and . . . he reads newspapers. Pardon me while I figure out my distant second and third picks for the Hart (MVP) Trophy.

Pastrnak remained locked in at 25 goals after Tuesday’s 2-0 clipping of the Hurricanes. He picked up the secondary assist on countryman David Krejci’s goal that made it 2-0 and he landed three shots on net. It was only the ninth time this season he didn’t score.

“I think he got a little frustrated tonight,” said coach Bruce Cassidy. “But so did their players. A tight checking game . . . puck was bouncing . . . but he stuck with it. That last goal, they both got hit. They’re a tough team to play. Their D move, they’ll run you out of room. He’s not going to score every game, right?”

In 2019-20, it’s just felt that way. In fact, Pastrnak hasn’t gone more than two games in a row without scoring this season.

The Bruins haven’t had anyone connect for 50 since Cam Neely did it for a third time in a Hall-of-Fame career in 1993-94.

In the quarter-century since, the likes of Phil Kessel and Tyler Seguin were penciled in as teenyboppers for that kind of volume, but both were shipped out before they really found their shooting groove. Neither one, by the way, has reached the mark. Kessel, barely on the scoresheet this year with the Coyotes, has not scored more than 37. Seguin, on pace for a meager 20 this season with Dallas, put up a career-best 40 with the Stars in 2017-18.

Cassidy, who stands to be the first Boston coach since Brian Sutter to have a 50-goal scorer on his roster, was the head coach at AHL Providence for Pastrnak’s North American immersion in the fall of 2014. He’s had a front-row seat, albeit from behind the bench, in watching Pasta’s evolution from “scrawny kid” to scoring strongman.

“Scrawny’s the wrong word, let me take that back,” Cassidy said following Tuesday morning’s tuneup in Brighton. “He was thinner. You could tell he had muscle, but he just wasn’t developed.”

In part, his lack of heft (requisite “thickness” in hockeyspeak) as an 18-year-old, factored in Pastrnak still being on the draft board when the Bruins stepped up to make the No. 25 pick. The only other player in that draft yet to develop as a dominant NHL scoring threat is the German-born Draisaitl (6 feet 2 inches, 210 pounds), who was plucked at No. 3 by the Oilers.

Pastrnak in 2014 was passed over by 23 teams, including the Canucks, who twice said no thanks, using their No. 6 pick on Jake Virtanen and then their No. 24 on Jared McCann. The Avalanche, at No. 23, also didn’t bite, and instead selected Red Deer center Conner Bleackley, who remains the only first-rounder in that draft yet to play a single NHL game.

Meanwhile, Pastrnak just keeps ripping after averaging 36 goals over the last three seasons, including a career-high 38 last year. Only 13 NHLers scored more goals last season. He entered the game against the Hurricanes with 157 career goals, 14 more than Draisaitl.

Pastrnak lasted roughly two months (25 games) with Cassidy’s WannaB’s before he was summoned to the varsity in 2014-15. He is now a mainstay on the NHL’s most prolific trio, with Marchand on left wing and Patrice Bergeron (when healthy) at center.

After Pastrnak left Providence, Cassidy didn’t see him much for a couple of seasons, other than when the coach would visit the ninth-floor press box on Causeway Street for a busman’s holiday. Even at that distance, six floors above ice level, he could see the difference, Pastrnak quick to build both his game and his strength.

“It was like, ‘Wow, this guy’s really put the time in,’ ” recalled Cassidy. “He’s bulked up, filled out, and I think it’s shown in his game.”

His time’s arrived. With the hockey season inching toward its midpoint, David Pastrnak is the No. 1 goal scorer in the world.