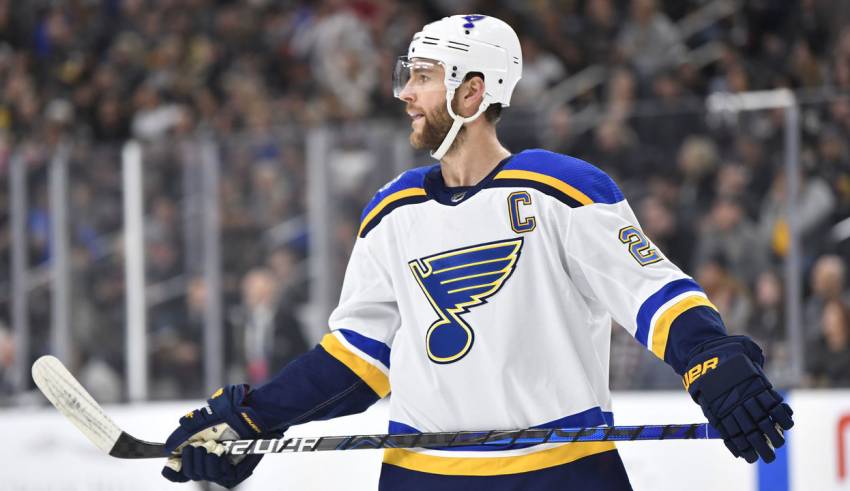 With the NHL preparing for a 24-team playoff, theScore will be counting down the top 50 players who will be taking part in this unique event, as voted on by our hockey editors. We’ll reveal 10 players every day until the top 10 is unveiled on June 10.

Regardless of where Pietrangelo plays beyond 2019-20, the Blues captain is one of the NHL’s most reliable defensemen and should make a significant impact this postseason. The pending unrestricted free agent played a major role in his team’s Stanley Cup victory last June, and he’s shown few signs of slowing down at 30 years of age.

Hall has only played in five playoff games through his 10-year NHL career. When he arrived in Arizona earlier this season, he had his eyes set solely on making the playoffs once again. The former Hart Trophy winner will look to make some noise in the Coyotes‘ play-in series and get another taste of postseason hockey before entering the offseason as one of the league’s most sought-after free agents.

Marner missed a slew of games with an ankle injury this season, but he played at a pace nearly identical to last year’s 94-point output when healthy. The crafty winger is a threat at even strength or on the power play and logs big minutes every game. His newfound success alongside Auston Matthews on the Maple Leafs‘ top line could be the ingredient the team has been missing throughout its recent run of playoff futility.

Seguin may have endured a dramatic drop in production and a career-low 6.9 shooting percentage this season, but he still paced the defense-minded Stars in scoring. The 6-foot-1 pivot also dominated in the faceoff circle, winning 58.2% of his draws to set a new career high and rank fifth in the league. With his elite combination of speed, skill, and developed two-way acumen, there’s no questioning Seguin’s status as a game-breaking talent.

With Steven Stamkos and Nikita Kucherov in the fold, Point is often the forgotten weapon in Tampa. After following his 41-goal, 92-point breakout campaign in 2018-19 with another stellar season, the 24-year-old has proven his big year was no fluke. The offense is just one side of the story with Point, though. He’s definitely the best defensive player among the Lightning‘s “big three” up front, receiving a handful of Selke Trophy votes in each of the last two seasons.

Pettersson is one of the most electric and entertaining players in the league. The dynamic Canucks forward continued to improve this season following last year’s Calder Trophy-winning campaign; he matched his rookie point production in three fewer games, increased his goals-per-game rate, and fired more shots on net. The sky is the limit for the supremely skilled Swede.

O’Reilly stepped up big time last season during his first year with the Blues. He took home the Conn Smythe Trophy as playoff MVP after helping St. Louis to a Stanley Cup victory, and he also claimed the Selke Trophy as the league’s top defensive forward during the regular season. One of the league’s best dual-threat centers, O’Reilly can do serious damage on both sides of the puck and will surely be looking for a repeat MVP performance this postseason.

Aho doesn’t get the same league-wide attention as some other first-line centers in these rankings, but he’s as capable as they come in any facet of the game. The 22-year-old plays in all situations, has sterling underlying stats, and posted a new career high in goals this season. His impact on the Hurricanes‘ success on a nightly basis is immense.

The Cats’ crafty winger is one of the game’s elite playmakers and was the offensive catalyst for a Panthers team that finished sixth in goals per game (3.30) this season. On pace for 92 points over a full 82-game season, Huberdeau looked poised to become just the second player in franchise history to record consecutive 90-point campaigns. He ranks seventh in assists and eighth in points among all skaters since the beginning of 2017-18 and is finally getting the recognition he deserves as an elite talent.

The league’s reigning Vezina Trophy winner, Vasilevskiy is the best goalie in the league – at least according to these rankings. Even when he’s out of position, the 25-year-old has the rare ability to make acrobatic saves that leave fans wondering, “how does he move like that?” But the best goalies of all time get it done in the playoffs. Vasilevskiy’s .856 save percentage in four postseason games against the Blue Jackets last year isn’t going to cut it for a team with championship aspirations.