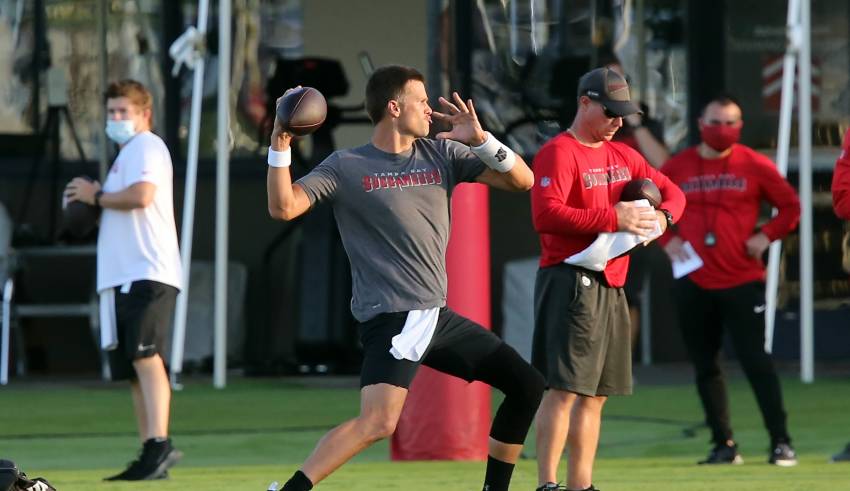 Tom Brady of the Buccaneers looks for an open receiver in the red zone during the Tampa Bay Buccaneers Training Camp on August 04, 2020 at the AdventHealth Training Center in Tampa, Florida.

As Covid-19 is setting fire to fall college athletics, the National Football League might be looking to alter its schedule to include Saturday games, perhaps even Friday contests, but there is one obstacle – U.S. law.

Chapter 32 in Title 15 of the United States Code states the NFL is prohibited from airing its content on Friday evenings starting at 6 p.m. or “on any Saturday” as high school and college football games typically occupy those days/time slots in the fall.

The Sports Broadcasting Act of 1961 was passed to allow sports organizations, including the NFL, exemption from the Sherman Antitrust Act, allowing leagues to bundle their teams’ content rights into one package and sell those rights to TV networks.

The law, which was introduced by New York Rep. Emanuel Celler and signed by President John F. Kennedy in September 1961, led to the NFL’s first big deal with CBS in 1962 for roughly $4.6 million.

The 1961 sports act also included stipulations that protected high school and collegiate football games. The law says the NFL isn’t allowed to show games “during the period beginning on the second Friday in September and ending on the second Saturday in December in any year from any telecasting station located within seventy-five miles of the game site of any intercollegiate or interscholastic football contest scheduled to be played.”

With the Big Ten and Pac-12 becoming the first of the Power Five conferences to postpone football seasons due to Covid-19, the NFL was said to be exploring moving games to Saturday, and perhaps Friday, too.

Mike Arthur, senior vice president of Veritone, which advises the Big Ten on its advertising and content licensing, also mentioned TV “networks will come calling sooner than later once they fully know what’s going on with college football.”

The NFL currently has media rights deals with major networks, including CBS, NBC and Fox, that bring in more than $5 billion annually.

On Wednesday, The Washington Post also reported the NFL could require a wavier to broadcast games on Saturdays, but also noted the league “would be leery of damaging its relationship with college football.”

Though the Big Ten and Pac-12 played it safe, the Southeastern Conference, which produced $721 million in revenue for 2019, the Atlantic Coast Conference and Big 12 still plan to hold football seasons for now.

Also, the NFL would need approval from the National Football League Players Association, and preliminary discussions have not taken place.

The NFL did not return calls from CNBC seeking comment.

The NFL, which canceled its preseason due to Covid-19, is scheduled to open its 2020 season on Sept. 10 on NBC when the defending Super Bowl champion Kansas City Chiefs host the Houston Texans.