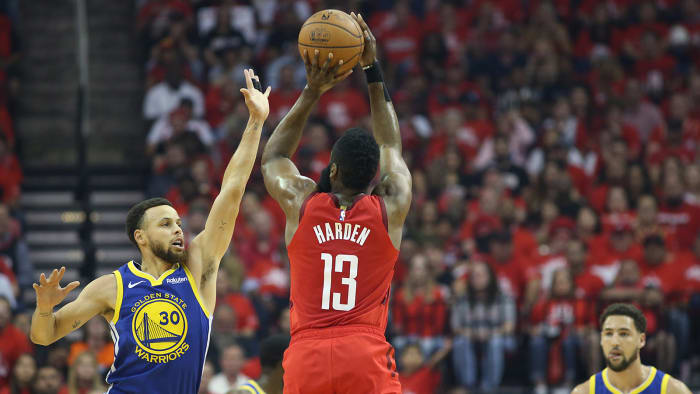 The NBA’s coronavirus suspension is nearly two months old, and there have been no shortage of creative attempts to keep our attention on the hardwood during the league’s hiatus. The NBA has televised 2K Tournaments and H-O-R-S-E competitions, and NBA TV has become a gold mine for classic games. But aside from The Last Dance, basketball has largely taken a back seat in the sports world’s consciousness. How can the NBA seize the headlines once again? Perhaps a one-on-one tournament would turn some heads.

The idea is largely a hypothetical, but it remains a thrilling one nonetheless, harkening back to halftime shows of decades past. How would such a tournament work in 2020? Let’s lay some ground rules.

To do this right, we’d need 16 participants–ideally the league’s top stars–with each single-elimination contest going to 21 (by twos and threes). Make-it-take-it rules are in effect after a player scores his third point, and each possession is one-and-out. Miss your shot, and the possession changes. Each game must (of course) be won by two points, just as the basketball gods intended.

Will James Harden step-back his way to the title? Will LeBron James keep his crown? Check out The Crossover’s picks for the quarantine event we actually want to see.

Perhaps Morant can go on a brief run due to his explosive athleticism, but just one Harden stop could end this in a flurry. Harden can simply rise up over Morant, and he can also generate easy buckets by burrowing into the paint. Add some muscle and come back next year, Ja.

A bit of a rough seeding break for Doncic. Luka is averaging 1.03 points per isolation attempt this season, the sixth-best mark of the 35 players with at least 100 IEO possessions. But let’s not act like Curry is some slouch when pulling a defender onto an island. Curry averaged 1.08 points per isolation possession last year. He sported a 1.05 mark in 2017-18. Doncic isn’t exactly fleet of foot, allowing Curry to score inside and mitigate the size disadvantage. A few missed threes from Doncic could end this in a hurry.

Westbrook is hurt by the one-and-out rule here, and he has little shot against his former teammate. Watching Westbrook bricking triples would be tough, but perhaps a hot streak from the mid-range–his ‘cotton shot’–could keep it close. Still, the smart money is on Durant.

I like the idea of Towns trying to back down Kawhi and making little to no progress on the reigning MVP. This picture comes to mind. KAT is the NBA’s truest unicorn, but he has little chance against Kawhi on either end.

Put this one in prime time! Perhaps Zion bullies LeBron for a few dunks, but otherwise, we know how this ends. LeBron walking off victorious, with Williamson huffing and puffing after a battle with The King.

Perhaps it’s a bit disrespectful to eliminate Irving in Round 1. The 2016 champion is an absolute magician at the rim, and he could very well convert 10 straight shots on the right day. But George seems well suited for this event. His 6’10” frame should stifle Kyrie on enough possessions, and George has quietly been a marksman from beyond the arc in recent years. George has hit 39.4% of triples since 2016-17, and only four players have hit more threes in the last four years. Count on George to get enough stops, then rise up over Kyrie to seal the victory.

Lillard isn’t lacking in confidence, and his range is undisputed. But he can’t take down the reigning MVP. If Lillard doesn’t score early, Antetokounmpo could dunk his way to a blowout victory.

The battle of the bigs could be our most exciting matchup of the first round, and this very well could go down to the final possessions. Why give the edge to Davis? His jump shot feels more reliable than Embiid’s, and his mobility should help him stay in front of Embiid when Philly’s center faces up. Embiid would likely fling up a few ill-advised jumpers, giving Davis the edge down the stretch.

Curry was able to outlast Doncic in the previous matchup, but Golden State’s point guard won’t be able to hold on against Harden. The 2017-18 MVP hunted Curry in isolation in each of the last two postseasons. If Harden got the opportunity again in a one-on-one matchup, he would feast.

This is a real toss up given perfect health for Durant, and perhaps no player in the NBA has a silkier jump shot. But it’s hard to bet against Kawhi after his dominant two-way performance in the 2019 playoffs. Leonard is expert at bullying his way to any spot on the floor, often settling himself on the elbow for an easy two. Oh, and he’s the game’s best perimeter defender. Durant is one of the smoothest scorers in league history, but Kawhi is another animal. He survives and advances in a battle of the heavyweights.

George has the skill-set to defeat anyone in our bracket, but his size advantage over Irving is eliminated against James. We’ve seen these two square off in the postseason plenty of times, and while George has seen his fair share of strong scoring nights, his Pacers teams never showed a real penchant for stopping James. Perhaps George can exact his revenge on LeBron in the Western Conference finals if the season resumes. In this exercise, James will continue to run up the score.

Perhaps this is a bit of an upset, but there isn’t much evidence to suggest Antetokounmpo is a nightmare matchup for the Lakers’ big man. Davis can shuffle his feet to stay in front of Giannis with relative ease, and he’ll certainly sag into the lane on most possessions. Antetokounmpo is no slouch on the defensive end. He’s certainly a Defensive Player of the Year candidate. But in a relative rock fight, Davis’ touch from the foul line extended could prove critical. It feels as though we sometimes underrate LeBron’s running mate. Davis could fully spread his wings in this tournament.

James Harden’s step-back is perhaps the most dominant move in recent memory, but expect Leonard to acquit himself well on a slate of possessions. The two-time Finals MVP could swipe a couple of steals as Harden dances his way beyond the arc, and as Harden and Mike D’Antoni know all too well, the NBA really is a make-or-miss league.

Harden is a sturdy post defender. He struggles to hang isolated on an island. Leonard should generate enough stops, then glide his way to the rim en route to a tight semi finals victory.

Davis remains well suited for this event, but James is a complete enough player to edge past his teammate in a one-on-one battle. James can bang home difficult looks from every conceivable angle (hello, Toronto) and his range has seriously extended in recent seasons. Perhaps Davis gets hot and cans jumper after jumper to send LeBron home. But when the chips are down, James seems to always rise to the occasion.

Antetokounmpo is cruising toward his second straight MVP, but these two are the top players for any playoff series in 2020. And it’s not hard to see why. Both have proven their mettle on the game’s biggest stage, and neither LeBron nor Leonard have significant holes in their game. Antetokounmpo’s jump shot is still a touch shaky, and it will be tested again and again in the playoffs. Such questions don’t exist for James and Leonard.

A one-on-one battle would likely be a nail-biter, and perhaps James’ extensive resume should give him the nod here. But it’s difficult to look past Leonard’s sheer defensive dominance. He’s an absolute brick-wall near the post, and his meat-cleaver hands are made to generate turnovers. Leonard is quietly one of the league’s most efficient isolation scorers. His burst to the rim is still elite despite previous knee trouble, and he gets phenomenal lift on his jumper. Consider this one a true toss-up, but ultimately, Leonard will exit the matchup with the NBA’s one-on-one crown. Perhaps he can follow it up with the Larry O’Brien Trophy in late August.