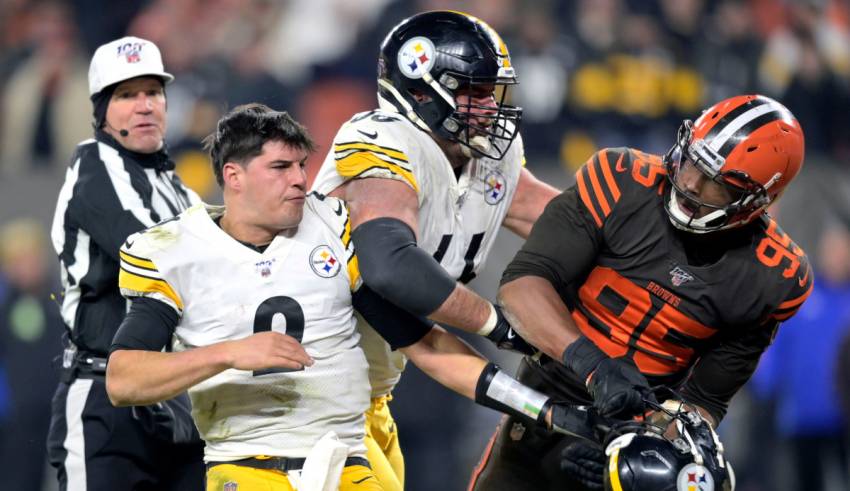 The NFL put its foot down swiftly on Myles Garrett with its indefinite suspension.

After further review, the other shoe must drop.

Six regular-season games is not enough.

Garrett should watch the first 10 games of next season as well before he can opt for reinstatement. Six plus 10 equals 16 games. One full season.

The NFL has always had to protect these players from themselves.

For a long time, it never tried.

Now it has been scared straight into trying by CTE, by the movie “Concussion,” and has rallied around its player-safety cause.

Maybe this one will be easier for the NFL to get right.

The league cannot legislate violence out of the game, nor, of course, would it ever want to. It remains the essence of the game. That would kill the most golden of geese.

The bloodlust crowd will never accept flag football. Neither would casual fans who enjoy the train wrecks of a collision sport.

This has never been, and never will be, a game played by Boy Scouts. Every Sunday, or Monday, or Saturday, or Thursday, is the Super Bowl of testosterone.

We shouldn’t be asking the NFL to be a paragon of virtue. But the league has an opportunity to send an important message to an audience it fears losing: its future pool, all the kids and their parents who are already wary of the sport’s inherent dangers and are steering the next generation away from football.

Zero tolerance for barbaric behavior that would get a man arrested on the street for assault and jailed.

The NFL — and especially Garrett — is lucky it does not have a tragedy on its hands today.

This is its wake-up call to try to prevent one.

The NFL hasn’t been spending time and money researching technologies that would make helmets swung at players’ heads softer on impact.

Linebacker Vontaze Burfict, who adds new meaning to the term repeat offender, earned a 12-game suspension for his on-and-off brutality over the years.

Mason Rudolph, the helmetless victim, has not yet been suspended. He is not blameless here. Watch the tape. He deserves one game. Larry Ogunjobi of the Browns got one game. And if Steelers center Maurkice Pouncey drew a three-game suspension for kicking and punching Garrett in defense of Rudolph, how can Garrett get a mere three more?

This isn’t an NFL virtually yawning at the late Lyle Alzado throwing a helmet at Chris Ward. At Antonio Smith swinging a helmet at Richie Incognito. At Charles Martin body-slamming Jim McMahon. At Albert Haynesworth stomping on the head of Andre Gurode. At Joe “Turkey” Jones planting Terry Bradshaw into the ground.

The performance of its officials is already jeopardizing the NFL’s integrity. The NFL has to make sure this eyesore doesn’t as well.