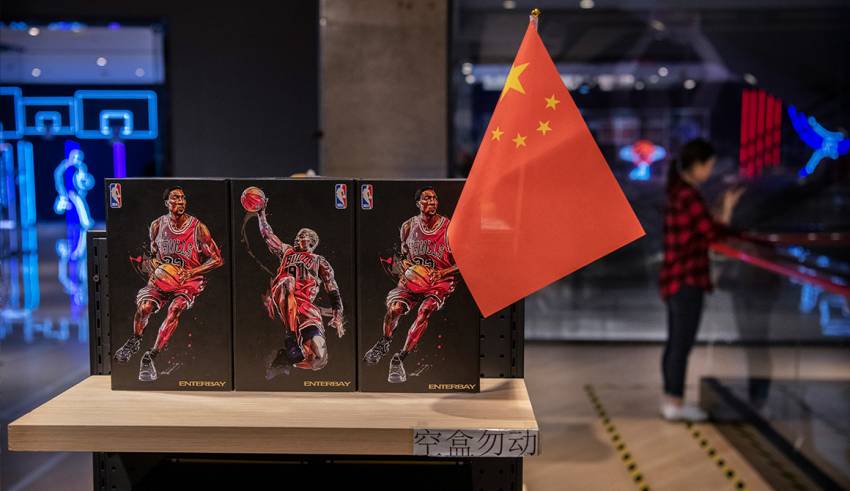 Suddenly, the tables were turned: The NBA, a new-media darling for its social justice advocacy, played the soulless corporate spin machine, while the NFL enjoyed ever-massive ratings, continuing its quiet getaway from the years of bad press incurred by its crackdown on the Colin Kaepernick-inspired national anthem protests.

Had the message come from the manager of a different NBA team, it might have gone unnoticed. But the Rockets have singular importance in China. Yao Ming, by far the most famous and statistically prolific Chinese national to ever play the game, spent his entire career with Houston, and his success fueled the growth of China’s robust basketball infrastructure, which has come to include deep financial ties to the NBA, a devoted fan base and a thriving professional league of its own.

The NBA, realizing that the Chinese government sees any speech supporting Hong Kong’s independence as an existential threat, reacted quickly to mend any potential injury to the league’s relationship with China. Its initial statement about Morey’s tweet was meant to placate both sides of the controversy; it had the exact opposite effect. Chinese state television canceled broadcasts of preseason games in Shanghai and Shenzhen, demanding a more explicit apology. At home, Silver’s perceived appeasement of the Chinese accomplished the seemingly impossible: uniting in protest a group of Republicans and Democrats so ideologically diverse that it included even bitter Texas rivals Ted Cruz and Beto O’Rourke.

But it’s not surprising that those most disappointed by Silver’s fumbling on the China issue are the NBA’s die-hard fans. Since he took over the league in 2014, the new commissioner has built its virtuous reputation to the point where the New York Times’ Bari Weiss was able to justifiably needle “The World’s Wokest Sports League” this week for its obsequiousness to an authoritarian, borderline-genocidal regime.

What the NBA’s demoralized boosters have largely overlooked, however, is a critical truth about its reinvention: Its liberal attitude isn’t just good for its fans’ consciences, it’s good for business.

The sports world, or at least the NBA, hasn’t changed its fundamental motive: profit. We’ve changed in what we demand as consumers. Over the past decade, Americans have come to expect an unprecedented level of political transparency from our entertainment, whether it’s the endless Trump-era boycotts of insufficiently ethical corporations, the emergence of identifiably partisan dairy products or the baffling furor over the lack of a 2016 presidential endorsement from Taylor Swift (for our purposes, a corporate empire unto herself).

In the past, multibillion-dollar industries like the NBA have played it safe, conservatively pitching themselves toward as wide an audience as possible. Now, they’ve inadvertently fueled that metastasizing culture war simply by acting in their own economic interest. For the NBA, that’s meant playing up their activism to an increasingly diverse, liberal American majority. By pushing the limits of the league’s tolerance for actual protest, Daryl Morey has inadvertently forced us to confront some uncomfortable truths about what we’ve come to ask from—and the compromises we may have to make with—our corporate and cultural behemoths.

And despite a second hack at asserting players’ and coaches’ free speech rights, those questions have only intensified around Silver, leading him to cancel all further media appearances during the league’s current jaunt to China. Trump gleefully took the opportunity to needle some of his longtime critics, mocking the outspoken coaches Steve Kerr and Gregg Popovich in his trademark discursive manner. Deadspin’s Drew Magary wrote in protest, simply, “The NBA Doesn’t Give a Fuck About People.” The league’s biggest stars have been conspicuously, embarrassingly shielded by flacks from questions about the controversy, and sign-wielding pro-Hong Kong activists have been kicked out of games—in America, in case you weren’t paying attention.

The China incident is the first controversy of Silver’s tenure to meaningfully pit the league’s “wokeness” against its bottom line, but in prioritizing the latter the commissioner isn’t contradicting the league’s history or spirit at all. The NBA has always threaded the needle between what’s economically and culturally expedient, and its desperate juggling act in attempting to preserve its market in China and its reputation at home is no different.

The NBA, like every other multibillion-dollar industry, hitched its wagon early on to the bullet train of globalization. In a prescient exchange during the 1997 NBA Finals, Chinese basketball pioneer (and state apparatchik) Xu Jicheng joked to then-commissioner David Stern that China could one day become the NBA’s second-largest market.

Stern quipped that it should be the first. In 2006, he laid his cards on the table in a remarkably transparent manner, speaking by proxy for most of corporate America when he told veteran basketball writer Jack McCallum that “The China situation bothers me… but at the end of the day, I have a responsibility to my owners to make money. I can never forget that, no matter what my personal feelings might be.”

Stern presided over an era during which the public had fewer, if any, expectations of progressive leadership from most cultural figures, much less its sports leagues. And his style was accordingly oriented toward the bottom line. The former commissioner shepherded the league out of its moribund 1970s, aligning it with pop culture by staging moments like Marvin Gaye’s national anthem performance at the 1983 All-Star Game, and the Beatlemania-esque international furor over the 1992 Olympic “Dream Team.”

He also aggressively policed players’ personal expression in an era when hip-hop culture and black activism had yet to break into the mainstream, much less become profitable marketing concerns. He instituted a strict dress code for post-game news conferences that drew accusations of racism, and infamously hit Denver Nuggets guard Mahmoud Abdul-Rauf with harsh fines for his anthem protests that predated Kaepernick’s by two decades, all but driving him out of the league.

Stern and Silver are clearly different men, raised in different eras, with different ethos. But you don’t get to be the commissioner of a multibillion-dollar industry—or charged with placating 30 fabulously wealthy, notoriously demanding owners—without a level of fundamental trust in one’s economic stewardship. The iron fist with which Stern ruled his players would today be unthinkable, and unacceptable to the young, liberal fans fueling the league’s ascent, but his rule was just as aligned with the league’s economic interests then as Silver’s equivocation with China is now.

The China controversy has forced both the NBA’s leaders and fans to contend with an uncomfortable truth about “woke capitalism.” By all accounts, Adam Silver is a well-meaning liberal who believes the NBA’s various social justice initiatives have inherent virtue. Early in his tenure, he booted the notoriously racist former Los Angeles Clippers owner Donald Sterling from the league, gave his implicit approval to teams’ continuing boycott of the traditional post-championship White House visit, and has since presided over an era in which coaches like Kerr and Popovich freely launch viral jeremiads against the Trump administration.

But it’s hard to imagine that he—and perhaps more importantly, the team owners—would be so tolerant if those decisions weren’t conveniently popular with the fans who collectively represent their future revenue.

Inconveniently for the league, another massive chunk of that projected revenue is in China, which is why this controversy has become so intractable—and why its burden will ultimately fall on the fans. The NBA is not going to jeopardize a relationship that amounts to reportedly around 10 percent of its net revenue, along with untold future profits, without significant pressure and protest that seems unlikely to materialize.

So for the first time in the league’s modern era, socially conscious NBA fans will have to engage in the same sordid internal wrangling with their consciences that NFL fans have for years over steroid use, concussions and domestic violence. Silver’s NBA has thus far been remarkably consistent in its politics, and therefore a guilt-free form of entertainment for those with whom it’s aligned.

The China controversy has made that untenable, but it’s not because of inconsistency on the NBA’s part. If there’s any revelation to come from the league’s heel turn on China, it should be an introspective one—that, no matter how passionately and bitterly one may wage the culture war online, in their personal life or through their pocket book, a compromise will ultimately be required.

If that seems too much to ask, it may be worth reflecting on how much we’ve asked in the first place of an entity created to sell bobbleheads and cable packages. Politics has always been part of sports, with icons like Muhammad Ali, Serena Williams and, yes, Colin Kaepernick making statements at significant personal risk.

But with apologies to Mitt Romney, those are people, not corporations. If the NBA is suddenly too much for you to stomach, it may be worth asking, to paraphrase a hoary sports cliche, when you started rooting for the logo on the front of the jersey instead of the name on the back of it.

This article tagged under: