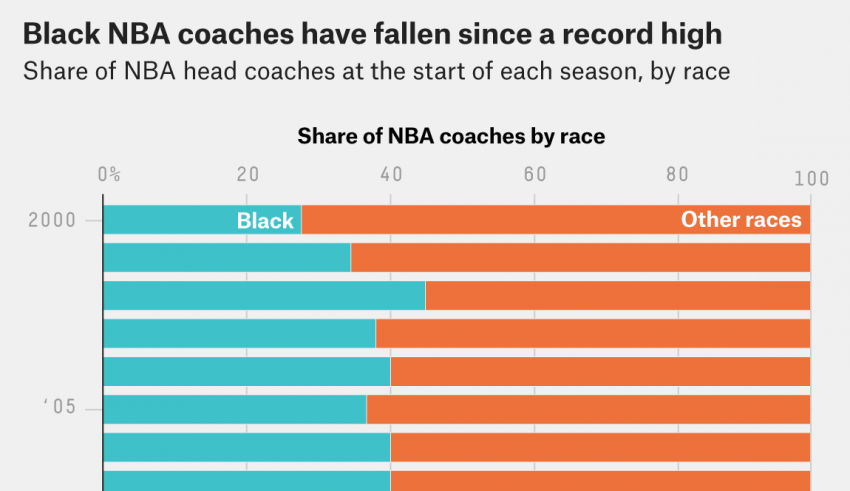 The NBA has earned a reputation as the most racially conscious and socially minded of the “Big Four” leagues. Going back decades, its biggest stars have been outspoken on issues of racial inequality, and league commissioner Adam Silver has been at the forefront of many of those conversations during his tenure. The league has consistently received high marks from The Institute for Diversity and Ethics in Sport for its racial hiring practices, and it hasn’t needed something like the Rooney Rule or Selig Rule to combat systemic underrepresentation of Black coaches.

Or does it? Despite its image, the NBA faces its own issues of underrepresentation: In a league in which three-quarters of the athletes are Black — to say nothing of the fanbase, which likely has the highest percentage of Black viewers in American sports — just eight of its 30 head coaching positions are occupied by Black coaches.<a class="espn-footnote-link" data-footnote-id="1" href="https://fivethirtyeight.com/features/the-nba-has-lost-ground-on-hiring-and-retaining-black-coaches/#fn-1" data-footnote-content="

Including Jacque Vaughn, who is the interim coach of the Brooklyn Nets.

“>1 A coalition of NBA players, led by Kyrie Irving and Avery Bradley, has demanded that the league commits to improving its hiring practices for Black head coaches, ahead of the NBA’s scheduled restart in late July.

In 2015, Bleacher Report’s Howard Beck wrote about the sudden loss of Black coaches from the NBA. A flurry of firings and departures over the course of just a few months led to the league’s fewest Black coaches in 16 seasons. “I think it bears watching, to see what happens,” New Orleans Pelicans head coach Alvin Gentry said at the time. “Five years from now, where are we going to be, from a numbers standpoint?”

Almost five years later, the surface-level numbers haven’t changed all that much. There were fewer Black head coaches (seven) at the start of this NBA season than there were to start the 2015-16 season (eight). That’s down from a league-record high of 14 Black coaches to start the 2012-13 season as well as the average of just under 11 Black coaches from the 2000-01 to 2009-10 seasons. What’s less clear, however, are the exact reasons behind the lower levels of representation over the last few seasons — and whether the trend is here to stay.

It’s possible that even slight differences in team performances have, over time, made a lasting, negative impression on NBA general managers. From 2000-01 to 2012-13, the NBA started each season with an average of just over 11 Black coaches. In those seasons, teams that started the season with a Black coach went 5,417-6,182 (0.467). But from 2013-14 to 2019-20, the league averaged fewer than nine Black head coaches, and teams that started the season with a Black coach went 2,163-2,640 (0.450) — slightly worse. As one Black NBA executive put it to Yahoo Sports in February, there can be reverberating effects if a Black coach’s tenure goes less than smoothly. “One Black guy gets a shot to hold a position, if he fails then the establishment looks at it and says Black guys can’t do that,” he said. “White counterparts fail and fail up all the time, and get replaced by more white guys.”

Take the example of David Fizdale, the former New York Knicks head coach who was fired after a 4-18 start with a roster that seemed doomed from the beginning. The purported front-runner for his old job is Tom Thibodeau, a white coach who was fired from his last two head coaching jobs and replaced by other white coaches both times.<a class="espn-footnote-link" data-footnote-id="2" href="https://fivethirtyeight.com/features/the-nba-has-lost-ground-on-hiring-and-retaining-black-coaches/#fn-2" data-footnote-content="

“>2 Of course, Fizdale’s stint in New York was a second opportunity after he was fired as coach of the Memphis Grizzlies a season after he led the team to the playoffs.

Not including interim coaches. Only coaches who started a year with a team were considered to have replaced the previous season’s coach.

Granted, the rate of turnover among NBA coaches has somewhat fallen over the last two decades, so the most recent five-year sample averages almost three fewer coaching changes than the earlier sample.

“>4 Only two of the 13 Black coaches who left their jobs since 2015-16 have been replaced by other Black coaches.

It also appears that, relative to their non-Black counterparts, newly hired Black coaches have increasingly been put in positions where it may be more difficult to succeed. All new coaches tend to inherit teams that struggled in the previous season: New coaches since 2000-01 have taken on teams with a previous season Simple Rating System (SRS) average of -2.09.<a class="espn-footnote-link" data-footnote-id="5" href="https://fivethirtyeight.com/features/the-nba-has-lost-ground-on-hiring-and-retaining-black-coaches/#fn-5" data-footnote-content="

SRS takes average point differential and strength of schedule into account, and is scaled such that the average score is zero. The 2004-05 Charlotte Bobcats were an expansion team and therefore had no previous season SRS.

“>5 From the 2000-01 season through the 2014-15 season, Black coaches actually joined teams with better ratings than their white counterparts: -1.51 SRS to -2.23. But since the 2015-16 season, those positions have flipped. In the past five seasons, new Black coaches have presided over teams with an average previous season SRS of -2.89, while new non-Black head coaches have coached teams with an average previous-season SRS of -2.63. Starting from a more difficult position, with an inferior roster, may make it harder for Black coaches to keep their hold on their jobs.

Furthermore, one of the most common areas of experience for Black head coaches in the NBA seems to be increasingly less sought after: playing experience.

In that 2015 piece, Beck wrote that NBA teams were increasingly looking for more “unconventional hires” and moving away from the “standard pool of former players-turned-coaches, a pool that is, by definition, predominantly Black.” The emergence of non-NBA player pipelines, Beck wrote, was a prime factor behind the decrease in Black NBA head coaches.

Two of the league’s most experienced coaches, Pistons coach Dwane Casey and Gentry of the Pelicans, did not play in the NBA. Neither did Fizdale, second-year Atlanta Hawks head coach Lloyd Pierce or J.B. Bickerstaff, who signed a multi-year extension with Cleveland in March after filling in midseason for John Beilein, who resigned. This could suggest a growing acceptance of those who didn’t come up through the traditional player-to-clipboard pipeline, which has been well-traveled by Black coaches. But if playing experience is no longer valued as highly for NBA coaching jobs, it’s bound to affect Black coaches more, given how many Black coaches historically have come from the player ranks. While the door might be opened to some, it will likely be closed to others.

All of this paints a complicated picture for the NBA’s hiring efforts moving forward. We know that the league faces a call to hire more Black coaches; what we don’t know are the necessary structures and networks to facilitate more diverse coaching ranks in the long run. Maybe it’s time to reexamine the widespread embrace of analytics and unconventional hiring sources that has blessed many franchises but may also have left some Black coaches behind.

And, of course, there’s an even more drastic disparity between the numbers of Black and non-Black executives. With the recent hire of Troy Weaver, the NBA has nine Black general managers, a higher number than in recent years, but just four have the final say in basketball-related decisions. Part of the concerns of Irving and Bradley relate to just that: the lack of Black voices in the league’s overall decision-making apparatus.

For now, we’re left to wonder, just like Gentry did in 2015, what the situation will look like in a few more years for Black coaches in the NBA.