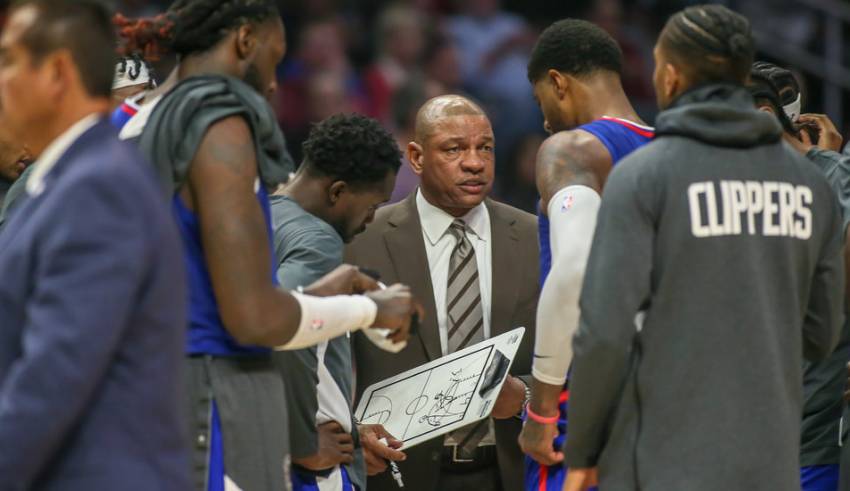 A new year, at the start of a new decade, makes this a natural time for N.B.A. teams to search for innovative ways to combat the offensive flourish of the previous decade.

Yet as disconsonant as it sounds, especially for a league reputed to be as progressive as the N.B.A., its coaches are increasingly dipping into the past for a defensive alignment that tends to be branded as antiquated or, worse, collegiate.

“There’s definitely more use of zone this season,” said Dallas Mavericks Coach Rick Carlisle. “Offenses are getting so good that if you can come up with some kind of defense that can upset rhythm a little bit, it’s viewed as a positive thing.”

Overall usage of zone defenses — schemes that call for defenders to guard a specific area of space rather than an opposing player — is up 50 percent from last season, according to Synergy Sports data. The increase per possession is 10.8 percent, according to data provided to N.B.A. teams by Second Spectrum.

A leaguewide average of 2.3 zone possessions per game remains modest, but the rise Carlisle referenced is more tangibly reflected by the number of teams regarded as regular zone practitioners.

Dallas, Toronto, Washington, Charlotte and the Los Angeles Clippers have joined Miami and the Nets as teams known to utilize zone schemes 4 to 10 percent of the time, according to Synergy. The Heat and Nets were outliers last season, employing zone schemes on 10.9 percent and 8.4 percent of their defensive possessions, according to Second Spectrum.

The stigma against zone schemes is strong, because turning to a zone alignment has long been regarded in the N.B.A. as a sign of weakness — gimmickry to cover up for poor individual defenders. Clippers Coach Doc Rivers recently suggested that Glenn Whittenberg, his former high school coach at Proviso East in Maywood, Ill., was likely “rolling over in his grave right now” in response to the amount of zone Rivers is using.

“He thought zone was a weak man’s game,” Rivers said.

The Hall of Fame guard Gary Payton still does. Payton retired in 2007, but the smothering guard unforgettably known as “The Glove” remains a passionate critic of zones at the pro level — even though his son Gary Payton II of the Washington Wizards happens to play for the N.B.A. team using more zone than anyone (9.8 percent of the time, per Synergy).

“Trash,” Gary Payton said in a phone interview. “That’s a cop-out. Why do college teams go to a zone? Because they can’t guard anybody.”

The Wizards’ No. 30 defensive rating through Thursday (Washington was allowing 115.4 points per 100 possessions) appears to support Payton’s contention. Yet in Toronto, Coach Nick Nurse has a roster filled with elite defenders, which has encouraged Nurse to not only embrace zones but also experiment with a variety of defenses rarely seen at the pro level.

In one memorable Game 2 sequence of the 2019 N.B.A. finals, Nurse unleashed “box-and-one” coverage on Golden State’s Stephen Curry — four players in a square-shaped zone, with Fred VanVleet shadowing Curry as closely as possible.

As the league’s defending champion, Toronto has countered injuries to key figures such as Pascal Siakam, Marc Gasol and Kyle Lowry this season with half-court double-teaming of Houston’s James Harden, 1-2-1-1 zone pressing and more box-and-one that, according to conventional N.B.A. wisdom, should not work against most skilled offensive players on the planet.

The Raptors have also mixed in a good bit of 2-3 zone — two defenders at the top with a row of three behind them — in securing the No. 2 spot in defensive rating despite all of their health woes.

“I think we have seen that some of these other defenses have worked,” said Nurse, whose Raptors are on a surprising 53-win pace even after losing the finals M.V.P. Kawhi Leonard in free agency. “For parts of games, anyway.”

After Leonard’s arrival — along with the acquisition of Paul George to join the tenacious Patrick Beverley and mobile frontcourt players such as Montrezl Harrell, Maurice Harkless and JaMychal Green — Rivers decided that the Clippers’ roster composition compelled him to think more openly about zones.

“We have a switchable basketball team for the first time in my career,” Rivers said, referring to the ability of similarly sized players to easily switch onto a different offensive player in the midst of a possession.

The Clippers, as a result, have used zone looks on 4 percent of their defensive possessions, according to Second Spectrum, and, like Carlisle’s Mavericks, have held the opposition to less than a point per possession when in a zone setup.

Beverley has said that, despite his own Payton-like determination to harass other guards, he has no issues when Rivers calls for zones. He played for nearly four seasons in Europe before establishing himself in the N.B.A., and zone defense is much more prevalent in leagues overseas.

Rivers, though, admits he will sometimes refer to it as a “flex zone” — or “more of a switching defense than a zone” — to encourage player acceptance.

The potential payoff of a well-executed zone is clear, despite the vulnerabilities it exposes in terms of rebounding and surrendering open shots. A good zone, at least for a time, can create confusion, inspire hesitation and potentially dislodge offensive supernovas such as Harden and Curry from their comfort zones.

Thanks to a lack of dependable perimeter shooters around the All-Star big man Joel Embiid, no team faces more zones than the Philadelphia 76ers. The most notable culprit for inviting that strategy is Ben Simmons, Embiid’s fellow All-Star, who has attempted only five 3-pointers all season — sinking two after shooting 0-for-17 from deep over his first two N.B.A. seasons.

The Athletic reported in December that the Sixers saw a zone on 156 possessions in a three-game stretch against Miami, Dallas and Washington over a four-day span. According to Synergy Sports data used in the report, 21 of the league’s 30 teams faced fewer than 156 possessions of zone defense for the entire 2018-19 season.

“We’ve seen so much innovation and change offensively over the last five years,” Toronto’s Nurse said. “It only makes sense that teams are going to try things and look for things defensively to counter that.”

The limited practice time teams enjoy in the modern game makes it challenging for coaches to implement zone coverages, because they typically require additional preparation and increased communication among the defenders. But that didn’t stop the Los Angeles Lakers, No. 3 in the league in defensive rating, from springing a surprise on Carlisle’s Mavericks on Jan. 10.

In a move right out of the Mavericks’ playbook, with the former Dallas guard Jason Kidd now on the bench as an assistant to Lakers Coach Frank Vogel, Los Angeles used a zone for numerous possessions in the second quarter in an attempt to short-circuit the rising Dallas star Luka Doncic’s usual pick-and-roll effectiveness — and then fell back into man-to-man coverage as soon as the Mavericks made their first pass. It’s a ploy Dallas used frequently against LeBron James and the Miami Heat in the 2011 N.B.A. finals, in which the Mavericks upset Miami in six games.

But James was on the winning side this time, with the Lakers rolling up a 21-point lead in the first half in an eventual 129-114 road win despite the absence of an ailing Anthony Davis.

The Mavericks, to this day, believe they would not have won their lone championship without substantial doses of zone. For all the talk that N.B.A. shooters are simply too proficient for teams to stay in zones for long, Carlisle expects zone defense to continue its comeback in the second half of the season.

“It’s been very cyclical in the last eight or nine years,” Carlisle said. “But the teams that are using it are using it with effectiveness. And you have to prepare for it. If you’re not prepared for it, you’re going to be up against it.”