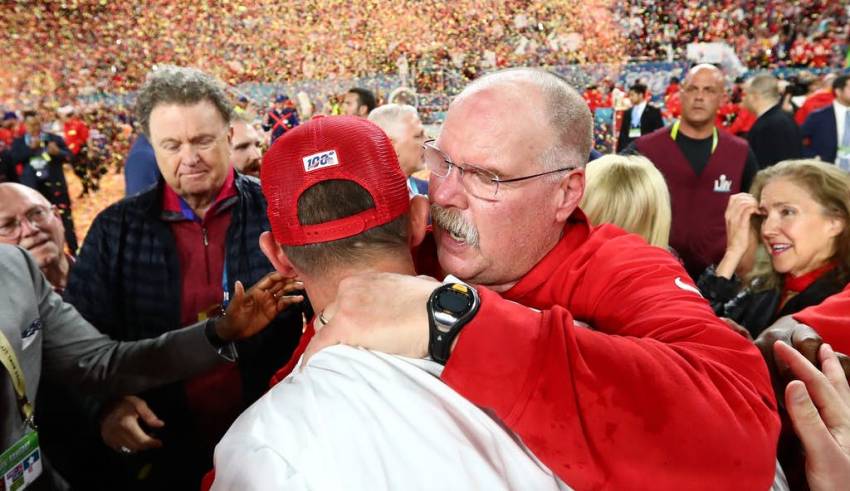 They want to climb Mount Everest — i.e. win the Super Bowl with a great offense. Anyone who reaches the summit is an expert. Most reach the summit following paths others created before them. A few create their own paths to the top.

Both types of coaches are great — a coach doesn’t have to innovate to succeed.

But this article is about the trailblazers. The ones who created a route that didn’t exist before they made it to the peak. The ones who changed the idea of what’s possible in offensive football.

Here are the four most innovative and influential offensive coaches in the history of the NFL, plus two current coaches who could join the group in the future.

If you haven’t heard of Sid Gillman, you should have. He influenced Al Davis, Bill Walsh and, in one way or another, every offensive coach working in the NFL today. FYI — he’s the one who introduced the idea of watching film to professional football.

Gillman modernized NFL offenses, but did it in the American Football League.

Gillman became the Chargers’ head coach in 1960, before the NFL and AFL merged. Back then, the NFL was the dominant league, and it featured a particular style of offensive football: Lots of runs, not so many passes, not so many points. Basically rugby. Call it proto football.

Gilman knew the AFL couldn’t use the same ground-and-pound style of offense and compete with the NFL. The AFL had to be more exciting to survive. So Gillman created the science of passing.

Now the NFL is a “passing league.” Gillman made it that way. He used to say, “The scoreboard is like a cash register.”

Gillman wanted to stretch the defense from goal line to goal line with deep passes, and sprinkle in some checkdowns and screens to running backs. That was his philosophy.

Walsh created a different philosophy. He wanted to stretch the defense sideline to sideline with short passes. And instead of checking down to running backs as a last resort, Walsh often made running backs the first or second option in the quarterback’s progression — think Roger Craig catching quick passes in the flat or over the middle, then running for long gains.

Walsh believed a short pass was no different than a run — a radical concept in the 1970s and early 1980s when teams usually handed off to their running backs or threw deep to their wide receivers.

Now, every NFL team has Walsh’s pass plays in its playbook. Walsh’s plays are still cutting edge 40 years later. And his disciples have populated the league since the late ‘80s — Mike Holmgren, Sam Wyche, George Seifert, Dennis Green — the list goes on and. Walsh’s tree is the Amazon Forest.

Those two coached at the same time and were rivals — each won three Super Bowls. But Walsh and Gibbs won them in different ways.

Gibbs won with three different quarterbacks — Joe Theisman, Doug Williams and Mark Rypien. The quarterback was not the focus of Gibbs’ offense. He won with his running backs — think Jon Riggins. And he won with his tight ends. Plural.

Before Gibbs, teams used two backs — a halfback and a fullback — and one tight end. This was the structure of NFL offenses. Gibbs didn’t use a fullback — he used one halfback and two tight ends. Again, radical. He invented one-back formations, and showed the league it’s possible to have a full, diverse, dominant run game with just one running back on the field.

Now, the fullback is an endangered species — only a few teams have them. Most teams use just one running back, because Gibbs showed them they could.

Reid is the first offensive coach to modernize the NFL since Walsh and Gibbs.

But Reid diverged where others didn’t, others such as Holmgren, Jon Gruden and Steve Mariucci. Those three were more faithful to Walsh’s original West Coast Offense.

Reid took the West Coast Offense and blended it with new-age spread-offense concepts that have taken over college football the past 15 years. Stuff Chip Kelly tried to bring to the NFL, but failed.

Kelly’s offense was too simple — he called the same few plays over and over. And he constantly used a hurry-up offense, which forced his defense to play most of the game. He had a gimmick.

Reid took parts of Kelly’s gimmick and added them to an already-dense West Coast Offense playbook. Added the zone reads, the run-pass options, the shifts and the motions. And now when you think of Andy’s Reid’s offense, you think of little Tyreek Hill running around behind the line of scrimmage causing the defense to panic before the play even starts. Reid made the game smaller and faster — defenses have to match up with Hill and players like him. Call it small ball.

Every team wants its own Tyreek Hill. Its own gadget player who can play wide receiver or running back. That’s Deebo Samuel on the 49ers.

Any team that doesn’t use lots of motions and shifts before the snap probably will fire its offensive coordinator soon. He’s outdated.

Yes, Greg Roman, believe it or not.

Roman is the most innovative offensive coach currently in the NFL. He’s a mad scientist.

Since 2012, he has dedicated himself to building an offense no other NFL coordinator has dared to adopt. He has built a quarterback-centric running game. Meaning the quarterback is the primary threat to run the ball.

But the pocket can be dangerous, too. And Roman does a masterful job protecting his quarterbacks. He often uses three tight ends at a time, which forces the defense to match up with big, strong defenders. But those big, strong defenders aren’t fast enough to chase down Roman’s quarterbacks — Colin Kaepernick on the 49ers, Lamar Jackson on the Ravens — and inflict serious damage.

So Roman usually has the best running game in the league. If he ever wins a Super Bowl — and he came close with the 49ers — other coaches will copy his offense. For now, it’s a daring experiment that may or may not last. So we give him credit for being creative, but not for being great. Not yet.

Shanahan is a better offensive coordinator than Roman. Has a better understanding of the passing game. And Shanahan is extremely creative. Plus he has incorporated the shifts and motions Reid uses in his offense.

But Shanahan isn’t yet as innovative as Gillman or Walsh or Gibbs or Reid. Shanahan expresses his creativity within a strict template — his father’s offense. A classic two-back offense featuring outside-zone runs and play-action-bootleg passes. Shanahan has updated it and modernized it, but is extremely faithful to his mentor.

Meaning Shanahan currently is like Mike Holmgren, Sean Payton and Bruce Arians. Not a bad thing. A very good thing. Those three are brilliant champions who adopted and perfected their predecessor’s ideas. Payton coached under Jon Gruden and surpassed him using Gruden’s stuff. And Arians coached under Tom Moore, Peyton Manning’s offensive coordinator on the Colts. Now Arians and Moore work together on the Buccaneers.

Shanahan might follow in their tradition — great coaches who win with an established offensive system. Or Shanahan could find his own path, as Reid eventually did.

Shanahan is only 40. He has decades to ascend the top of the mountain. He may discover more than one way to scale it before his career ends. Keep climbing, Kyle.