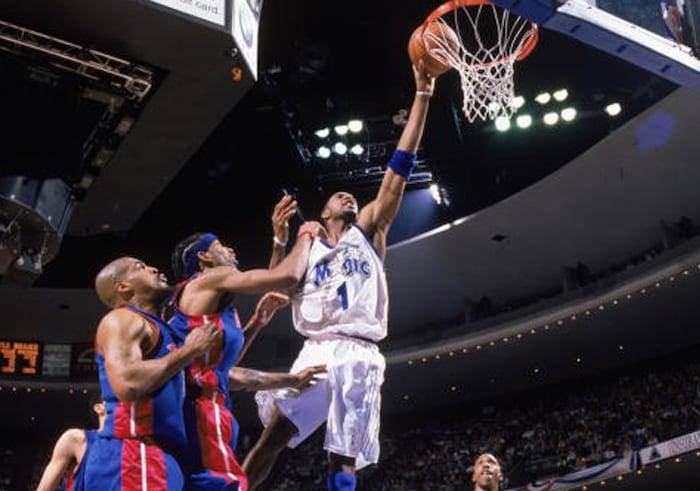 ORLANDO – This year will be the third time in franchise history that the Orlando Magic will be a No. 8 seed in the playoffs. The previous two times were in 2003 and 2007. Both those years the Magic lost to the Detroit Pistons in the opening round.

The first time a No. 8 seed eliminated a No. 1 seed was in 1994 when the Denver Nuggets overcame a 2-0 series deficit to stun the Seattle Supersonics in a best-of-five. Robert Pack scored 23 points off the bench, former Magic player Bison Dele recorded 17 points and 19 rebounds and Dikembe Mutombo pulled down 15 boards in the decisive Game 5.

In 1999, the New York Knicks knocked off the top-seeded Miami Heat in five games. Allan Houston hit a game-winning runner with 0.8 seconds remaining in the series finale. The Knicks would later become the first and only No. 8 seed to advance to the NBA Finals, where they lost to the San Antonio Spurs.

The NBA decided to extend the first round of the playoffs to a best-of-seven in 2003. That year, the Magic actually had a 3-1 series advantage over the Pistons, which would have propelled them to the next round in prior years. Instead, Detroit took control of the series starting in Game 5 and ultimately won in seven games.

The first time a No. 8 seed defeated a No. 1 seed in a best-of-seven was in 2007 when the Golden State Warriors ousted the Dallas Mavericks, who were considered to be the title favorites going into that year’s postseason. Baron Davis averaged 25.0 points in the series that went six games, while Stephen Jackson averaged 22.8 and Jason Richardson, who would later play for the Magic, scored 19.5 points per game.

In 2011, the Memphis Grizzlies, who hadn’t been in the playoffs in any of the prior five years, beat the Spurs in six games. Zach Randolph thoroughly outplayed Tim Duncan throughout the series, averaging 21.5 points and 9.2 rebounds. These two teams would end up meeting in the playoffs again two years later in the Western Conference Finals. The Spurs swept the Grizzlies in that series.

The Philadelphia 76ers, led by Jrue Holiday, Andre Iguodala and Lou Williams, knocked off the Chicago Bulls in 2012 in six games. In Game 1 of that series, Derrick Rose, the prior season’s league MVP, tore his ACL in his left knee.

Several times No. 8s have pushed No. 1s to the limit. One example, as mentioned before, was when Detroit needed all seven games to defeat Orlando in 2003. Atlanta took Boston, which ultimately won the championship, to seven games in 2008. The Hawks did the same against Indiana in 2014. That same year, the eventual champion Spurs survived a first-round scare against the Mavs. Vince Carter, then playing for Dallas, buried a game-winning 3-pointer at the buzzer in Game 3 of that series that went the distance.

When the first round was a best-of-five, Miami took Atlanta to five games in 1994, Milwaukee did the same against Indiana in 2000 and Indiana pushed New Jersey, which ultimately advanced to the Finals, to five games in 2002. In the West, Seattle forced a Game 5 against Portland in 1991, the Lakers did the same against Phoenix in 1993, Houston fell short in five games to Utah in 1998 and the same happened to Sacramento in 2000 when they lost to the eventual champion Lakers.

This year, the Magic will obviously have their hands full against the Bucks, who are led by reigning league MVP Giannis Antetokounmpo. It’s the second time these two franchises will meet in the playoffs. The last time it happened was in 2001 when Milwaukee beat Orlando in four games in a best-of-five first round. The Magic were a No. 7 seed that year.