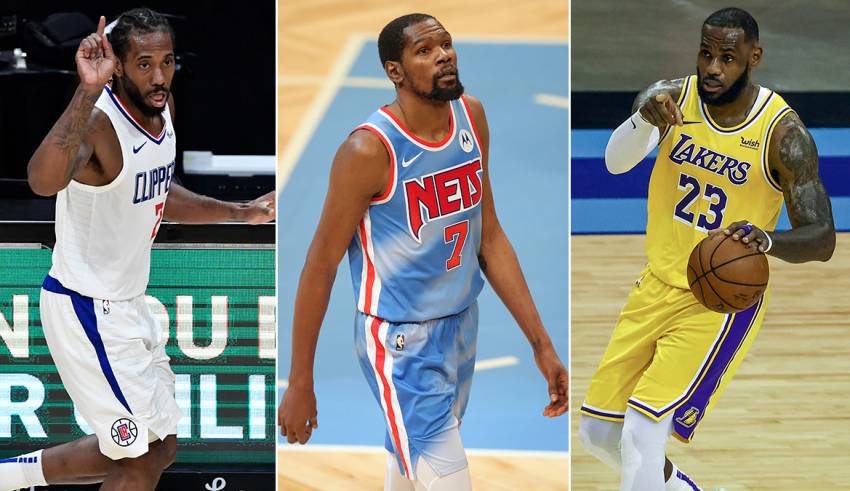 In the wake of the Nets’ acquiring James Harden, I thought it would be a good time to take stock of the best teams around the NBA and see how the trade affects (if at all!) the pecking order among Finals contenders. It’s also always thrilling to simply shoot a take off straight from the hip. With the obvious caveats that a) things can and will change significantly between now and the playoffs and b) every number from this season has to be taken with a glacier of salt because of the pandemic, here is how I believe the best teams in the NBA stack up as of late January. Maybe we’ll revisit this list after the buyout deadline, but for now, this is how I would handicap the Finals race.

LeBron is casually averaging 24/8/7 in by far the fewest minutes per game of his career, Anthony Davis is a Defensive Player of the Year candidate and the team’s offseason additions have been thriving. What’s scary about the Lakers is they seemingly haven’t hit the gear they were in for much of last regular season, when they practically led the West standings wire to wire. The Lakers are in first place again, but are taking a slightly more cautious approach to this run. And they’re still smoking opponents, sporting the best net rating in the league thanks to the fourth-most efficient offense and stingiest defense in the league.

That offensive mark is most notable. In 2019–20, the Lakers finished with the 11th-best offense in the NBA—certainly respectable but not elite. They are much scarier on that end of the floor, thanks in part to some improved spacing and three-point shooting (though some guys, like Kentavious Caldwell-Pope, are due for a little regression percentage-wise.) And the Lakers may still not have found their best lineup combinations. Only one group, the starting five, has played more than 100 minutes together. The LeBron, Davis, KCP, Marc Gasol, and Dennis Schröder group has a comical 25.2 net rating together, thoroughly elite on both sides of the floor. As good as the Nets’ new trio is with Kyrie Irving, Kevin Durant and Harden, it’s hard to imagine them posting a better offensive rating than 127.2, the current mark of the Lakers’ starters.

Otherwise, Frank Vogel is still experimenting with the right combos for this team. And after last season, he’s earned the benefit of the doubt. Remember, the Lakers never really settled on a finishing five until the bubble, and even then often found themselves riding the hot hand among role players. Vogel has proved adept at finding the right ways to match up against certain opponents. As much firepower as some other teams may have, the Lakers are showing this year they can match those units offensively. Mix in LeBron, championship experience and the best defense in the league. I don’t know how you bump the Lakers from the top spot.

This is probably where it gets interesting, but as presently constructed, I think the Clippers are the biggest threat to the Lakers’ repeating. Obviously the Clips failed to capitalize on their promise last season. After looking like a juggernaut at times before the bubble, Kawhi Leonard and Paul George completely folded in the playoffs, not only blowing a 3–1 lead to the Nuggets, but putting up pitiful performances in Game 7 with their season on the line. I’m willing to give both of those guys a pass on the bubble and, instead, I’m banking on them playing more true to their abilities in a theoretically more normal setting this summer.

Before we even get to the numbers, at first blush, is there a team more equipped to deal with the Lakers and Nets than the Clippers? No team in the universe has the length, athleticism and veteran know-how than the Clips do on the defensive end. I’m not suggesting the Clippers are necessarily going to shut down guys one-on-one, but with Kawhi, PG, Patrick Beverley, Nicolas Batum, Serge Ibaka and Marcus Morris, there are six solid-to-elite defenders to throw at either LeBron and AD or KD, Kyrie and Harden. The Clippers are going to be able to play some of the most switchable lineups in the league, and that could really come in handy during the postseason.

Ty Lue’s starting five is right up there with Vogel’s. The Kawhi, PG, Ibaka, Batum and Beverley group has a 23.3 net, with a suffocating 96.7 defensive rating. Losing Montrezl Harrell to the Lakers may have been uncomfortable, but signing Ibaka could prove to be a significant upgrade, especially in the playoffs. And Batum has been a revelation, feasting on the open three-point looks provided by his teammates and helping take tough assignments defensively. With Zubac, Morris and Luke Kennard, the Clips also have some capable guys coming off the bench.

Of course, anything the Clippers do will fall on Leonard and George come playoff time. Kawhi is still a two-time Finals MVP with a Game 7 buzzer beater on his résumé. And the bubble was the first time in his career George was arguably the biggest reason his team lost. PG is having a bounce-back year, and even when his hot shooting comes back to earth, I’ll be willing to bet on his redemption come playoff time.

Separating the Nets and Bucks is the hardest part of figuring out the East. The Nets are super thin, and their defense is a legitimate cause for concern. Who is going to close games for this team? Can Brooklyn string together stops with Harden, Kyrie and Joe Harris playing together down the stretch of a playoff game? Is Jeff Green going to be expected to slow down opposing wings in big moments? As tough as answering those questions will be, the Nets are going to make it even harder for other teams with their offense.

Harden, Kyrie and KD lost their first game together, and it wasn’t pretty watching them defend the Cavs. But the Nets’ offense hit the ground running, and those three will only grow more comfortable playing together. At one point down the stretch of Brooklyn’s game against Cleveland, Harden had an isolation near the top of the key, and a defender actually left Harris on the perimeter so they could double Harden. Imagine having to leave one of the best shooters in the league wide open simply because of someone dribbling at the top of the key. Brooklyn is going to force defenses to make so many uncomfortable choices. Even if every one of their games in the playoffs is a shootout, who do you trust to score more than them?

What also bears watching here is that Brooklyn has three open roster spots. The Nets practically have no flexibility in terms of trades, but they’ll have a chance to add a buyout guy or two who can significantly improve their depth. Outside of defense, the lack of proven role players is an issue here, though guys like Bruce Brown and Timothe Luwawu-Cabarrot have had their moments. Still, top-heavy teams have made the Finals before (see: the 2011 Heat), and, with Durant picking up where he left off pre-Achilles, I think Brooklyn has the edge over Milwaukee.

The Bucks are still dominant, Giannis Antentokounmpo is still often unstoppable, and the team trails only the Lakers in net rating. And though Milwaukee’s defense currently sits outside sthe top 10 in the league, that seems like more of a quirk than a long-term issue. Essentially, the Bucks are more or less hitting most of the same notes they did the last two seasons. What gives me pause about this team is I don’t think their depth is super far ahead of Brooklyn’s, and in a potential playoff series, you could argue the Nets would have three of the four best players (depending on how you feel about Khris Middleton.) You could even argue Durant is better than Giannis, and I certainly wouldn’t think you’re ridiculous.

Offensively, I loved how the Bucks used Giannis as a screener in their MLK Day game against Brooklyn. It seemed like Middleton was getting any shot he wanted in the pick-and-roll with Antetokounmpo down the stretch, and Milwaukee has weirdly been gun-shy about leaning on that action heavily in the past. That’s a really positive development, and teams will not be able to guard that conservatively come playoff time. Conversely, I do remain worried about the Bucks’ own defensive preferences. Will Brook Lopez still be in drop coverage come the postseason? If Giannis takes over at the five, who will be guys four and five alongside him, Jrue Holiday and Middleton? Will those players be liabilities? Also, will Giannis guard the other team’s best player?

The Bucks are really, really good. Separating them from the teams above them on this list is not easy. While Milwaukee remains very much a threat to make the Finals, I’m not sure bringing in Holiday has made a massive difference in what’s stopped this team from making a leap forward the last couple of years.

There’s a big drop-off between the top four teams and whoever you want to put in this spot. The Sixers, Jazz, and Celtics all have great arguments to occupy No. 5 on this list. I’m going with the Nuggets because a) Nikola Jokic has been MVP-caliber, b) we’ve seen them make it work in the playoffs and c) they can’t stop any of the teams above them from scoring, but they can hang with them as well as anyone in the league. Whoever you believe should be in this position, if they actually won the Finals, something strange almost certainly happened.