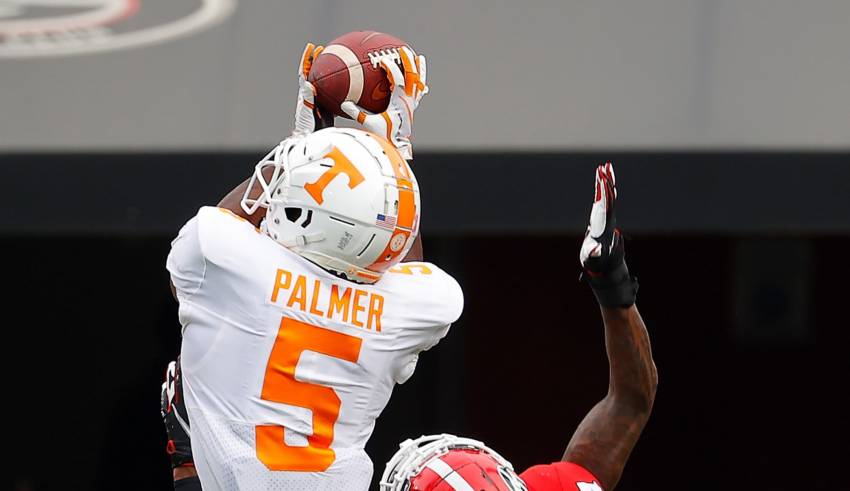 General Robert Neyland’s Seven Game Maxim’s have been a Tennessee football tradition since he coached the Volunteers in the 1930s. The seven maxims, which are present in UT’s locker room for each contest, both home and away, provide the team with a set of keys to victory.

Neyland’s third maxim boasts: “If at first the game – or the breaks – go against you, don’t let up – put on more steam.” For four years, through coaching changes and losing seasons, Josh Palmer didn’t let up. Now, he’s generating some steam of his own as a 2021 NFL Draft prospect.

A little over a week separated from his flashy performance at Tennessee football’s Pro Day, Palmer was listed in PFF College football’s Top 10 best WR prospects for the 2021 cycle. PFF, which grades football players at the collegiate and professional levels based on every snap they play, lists the former Tennessee football standout among a group of name-brand players.

The Canadian-born athlete is notably ranked ahead of former Clemson Tigers wideout and the son of Tee Martin, Amari Rodgers, along with PAC-12 playmaker and former USC Trojan Amon-Ra St. Brown. With 33 catches for 475 yards and four touchdowns in 2020, the site said Palmer could increase production in the NFL with a better quarterback situation.

PFF’s top 10 ranking comes weeks after ESPN’s Draft Expert Mel Kiper Jr. stated that this year’s wide receivers make up the deepest position group in the 2021 class. While Kiper Jr. left Palmer out of his top 10, he has Palmer will go early in the third round. That may be a testament to how great this year’s wide-out class is as opposed to a knock on Palmer’s talent.

Still, despite the speed disparity, Palmer’s name is mentioned in the same breath as some very elite prospects. His game tape, which includes touchdowns over the Alabama Crimson Tide and the Georgia Bulldogs, appears to have seared itself into the minds of NFL scouts and executives.

As we inch closer to the NFL Draft beginning on April 29, the hype surrounding Palmer only continues to grow. Scoring a touchdown at the Reese’s Senior Bowl cemented his status as a potential dark horse prospect and his performance at UT’s Pro Day appears to have only further solidified his draft stock.

Along with Trey Smith, Bryce Thompson and Brandon Kennedy, Palmer is one of four Tennessee football players eager to hear their names called at the end of this month. It’s looking better and better for him at this moment.