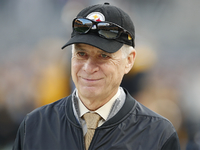 Pittsburgh Steelers owner Art Rooney II said Tuesday the NFL’s Workplace Diversity Committee will examine this year’s head coach hiring cycle to determine what can be done as it relates to the Rooney Rule to improve opportunities for minority candidates in the NFL.

The Fritz Pollard Alliance, an advocacy group that fights to increase minority representation throughout NFL front offices, coaching staffs and scouting departments, called the hiring cycle a “blemish on the National Football League” in a statement Monday.

“I think where we are right now, is not where we want to be, not where we need to be,” Rooney said in an interview with Steve Wyche that will air during Wednesday night’s NFL Total Access. “We need to take a step back and look at what’s happening with our hiring processes. The first thing we’ll do as part of our diversity committee is really review this past season’s hiring cycle and make sure we understand what went on and talk to the people involved both on the owner’s side, management’s side as well as the people that were interviewed. The thing I think we have to look at is back when the Rooney Rule was passed and put in effect in 2003, there was a period there where we did see an increase in minority hiring at the head coaching position. And I think over a period of time there were 10 or 12 minority coaches hired. Since then that trend seems to reverse itself particularly in the last few years. We need to study what’s going on and understand better what’s going on and really decide how we improve the situation.”

In Dec. 2018 the league implemented modifications to strengthen and enhance the effectiveness of the Rooney Rule, including the rule that teams must interview at least one diverse candidate from the Career Development Advisory Panel list or a diverse candidate not currently employed by the club. Rooney said Tuesday other changes could be implemented this offseason like expanding the rule to coordinators or increasing the number of required minority interviews.

“If we changed that rule last year, obviously we have to look at what we can do differently now,” he said. “Perhaps even expand the Rooney Rule into some of the lower levels, perhaps the coordinator level. Just to make sure the minority opportunities are there.”

Rooney added: “I think in general when you look at this year’s process, and like I said, we’re going sit down and look at it early. As it appears right now, there just weren’t very many minorities in the process at all this year. And I’m not sure why that is. It doesn’t need to be that way. We have about one-third of the coaches in the National Football League are from the minority communities. That’s really not a bad pipeline. And so, the question is, why aren’t more of those people getting interviews. Why aren’t more of those people advancing through the process. Like I said, there are a lot of pieces to it that we have to look at. We have a lot of work to do that.”

Adopted in 2003, the Rooney Rule is an NFL policy requiring every team with a head coaching vacancy to interview at least one or more diverse candidates. In 2009, the Rooney Rule was expanded to include general manager jobs and equivalent front office positions. The Rooney Rule is named after the late former Pittsburgh Steelers owner and chairman of the league’s diversity committee, Dan Rooney.