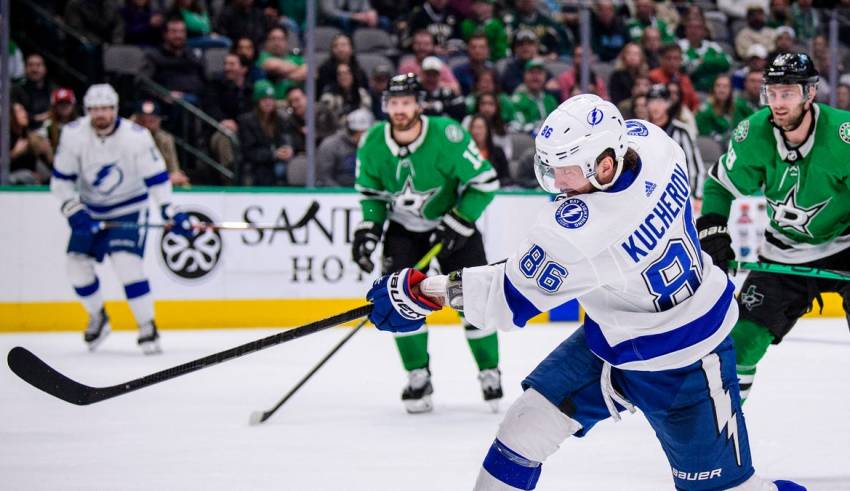 Nearly one year after the start of the 2019-20 NHL regular season, the league is set to crown a champion now that the Stanley Cup Final matchup is set.

The Tampa Bay Lightning will take on the Dallas Stars beginning Saturday night in the Edmonton, Alberta, bubble.

Tampa Bay was among the best teams in the Eastern Conference this season, finishing with a 43-21-6 record (92 points) and finishing with a .657 points percentage before the season was paused March 12 due to the coronavirus pandemic.

Dallas went 37-24-8 (82 points) in 69 games before its season was put on hold. That .594 points percentage was good for third in the Central Division and fourth in the Western Conference.

The Lightning knocked off the Columbus Blue Jackets and Boston Bruins in five games and the New York Islanders in six. The Stars, meanwhile, needed six games to dispatch the Calgary Flames, seven against the Colorado Avalanche and five against the Vegas Golden Knights.

This series will see a Lightning team that has fallen short of expectations over the past six years (losing in the final in 2015) and a Stars group that had a mid-season coaching change and has made the playoffs four times in the past 12 seasons, last reaching the final in 2000.

Here’s how USA TODAY’s experts see the series playing out, including who will win the Conn Smythe Trophy as the Most Valuable Player in the playoffs:

► Jimmy Hascup: Lightning in six games. In losing their first-round series to the Blue Jackets last season, the Lightning got a hard lesson that skill isn’t the only thing that wins out in the postseason. They would need that “hard-to-play-against / sandpaper” intangible that makes teams a full, 200-foot team that requires opponents to earn their ice. Fast forward to 2020 and the Lightning are a more complete team (thanks to depth additions like Blake Coleman and Patrick Maroon) that doesn’t need to overwhelm on offense to win. It has even gotten this far without captain Steven Stamkos — courtesy of Conn Smythe-worthy efforts from Nikita Kucherov and Brayden Point. Dallas has surprised, but the Lightning are on a mission.

Conn Smythe: Brayden Point, Lightning. Without Stamkos, Point’s role as the Lightning’s top center can’t be overlooked. He has nine goals and 25 points. As long as  he’s relatively healthy for the Stanley Cup Final, he will be a frontrunner for this award.

Mike Brehm: Lightning in six. These teams’ defenses are evenly matched and goalies Anton Khudobin and Andrei Vasilevskiy have been impressive. But the edge goes to the Lightning offense, especially with Point able to return from an injury that kept him out for two games in the Eastern Conference final. One concern for the Lightning: They have a short turnaround and they have played a lot of overtime, including the last two games and a five-overtime win in the first round. But their depth will pay off.

Conn Smythe: Kucherov, Lightning. The reigning league MVP was a disappointment in last year’s loss to the Blue Jackets, sitting out one game with a suspension. He has bounced back impressively this postseason and leads all players with 26 points. And he has done that while playing hurt. He was high sticked by Boston Bruins defenseman Zdeno Chara and has been seen grimacing other times. He should finish as the playoffs’ leading scorer.

Jace Evans: Lightning in five. The Stars’ run to the Final has been unexpected to say the least, with no shortage of incredible stories. They’ve taken their fans on a ride they’ll never forget. But the Lightning are just better. Tampa Bay has the reigning MVP in  Kucherov and he’s been playing like one. It has the reigning Vezina Trophy winner in Vasilevskiy, who enters the Final with a rock-solid .931 save percentage. With a solid defense and depth, Tampa has outshot the opposition in 12 of its 19 postseason games. Dallas is the first team in the Final to have a negative goal differential in the postseason since the expansion St. Louis Blues in 1968. The Lightning have been on the verge of a Cup victory for several years now. This time Tampa gets it done.

Conn Smythe: Victor Hedman, Lightning. Vasilevskiy has a fantastic case, but I’m going with the guy who patrols the blue line for big minutes (averaging 26 minutes, 31 seconds) in front of him. Hedman enters the Stanley Cup Final tied with Point for the Lightning lead in postseason goals with nine, already the third-highest total ever recorded by a defenseman in one playoff run. Hedman has also been the Lightning’s de facto captain with Steven Stamkos injured for the duration of these playoffs. The 2018 Norris Trophy winner’s leadership has been on display as Tampa has bounced back from its 2019 playoff debacle with a flourish.