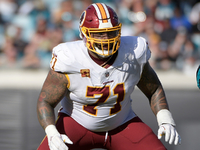 It would seem the Trent Williams saga is taking its next turn and that turn is likely to lead the left tackle out of Washington D.C.

Williams has seven Pro Bowls to his credit, all of them coming consecutively from 2012-2018, but the streak ended in 2019 as he didn’t play a game, holding out before returning and finding his way to injured reserve.

Williams’ discontent with the Redskins is rooted in what he said was a misdiagnosis of a cancerous tumor on his head.

With the Redskins revamping their front office, new coach Ron Rivera reached out in hopes of mending fences with Williams and bringing about his return, but that apparently hasn’t lessened Williams’ desire in leaving the Redskins in his rear view.

Just recently, it was reported that Williams wanted a new contract or to be traded. It appears the latter could well be developing.