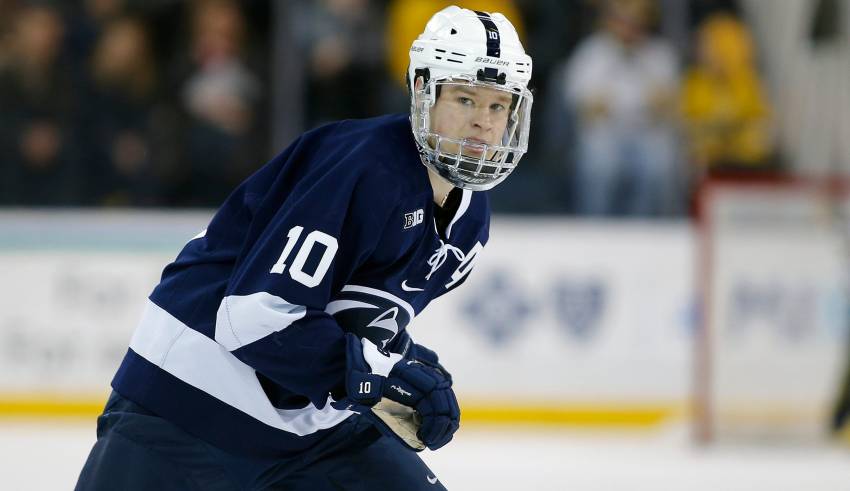 Colton Poolman had a good feeling about what was to come.

He and his North Dakota teammates were ranked third in the country with the conference tournament coming up. They felt they had as good a chance as anyone to win the NCAA title until the season was abruptly canceled because of the coronavirus pandemic.

“It was a pretty depressing feeling around the rink, and guys were a little sad,” Poolman said. “But after all that was done, you’ve just got to kind of flip the page and look at what’s next.”

For Poolman and others who had not been drafted by an NHL team, flipping the page happened fast. Because hockey at every level is on hiatus and rinks are empty, signing college free agents is the only real business that can be done in the NHL right now, and a dozen have inked contracts since the season was paused March 12.

“We’re trying (to think, ‘How do we use this time the most effectively we can?’” said Calgary general manager Brad Treliving, who signed Poolman and top college prospect Connor Mackey to deals last week. “This is some of the only work that can get done. Even with your own players, you have uncertainties about (next season’s salary) cap. There’s really a small market of players that are really future (entry-level) contracts that are going to be signed right now.”

This is typically the time of year teams compete over the top undrafted talent. Typically, signings happen after teams are eliminated from postseason play, which allows some players to step right into the NHL to burn a year of the initial contract.

Nothing is typical in sports right now, so executives, agents and prospects adjusted. Dean Grillo, who represents Poolman and college roommate Cole Smith — a Nashville signing — had his clients prepared to think about pro hockey at the end of March or sometime in April, factoring in potentially deep tournament runs.

Once the season was canceled, Treliving and other NHL executives moved into action and Grillo said interest in the high-end players accelerated.

“If these are the right opportunities and the right teams that we’ve done our research on, I guess why wouldn’t you move forward,” Grillo said.

Players described the quick turnaround from season over to pro contract as a roller-coaster ride.

“Woke up (last) Thursday going to practice, knowing you’re going to have a game and then it going to no fans and then literally an hour and a half later to the season’s canceled. Almost hard to put into words,” Rueschhoff said. “Even now I’m still kind of dwelling that my college career is over and having those memories and knowing you’re not going to have those memories anymore is sad. But there’s always a positive and I’m super excited to (join the Rangers) and excited to get to New York as soon as everything calms down and super excited to get my career going.”

Northeastern’s Brendan Van Riemsdyk, whose brothers James and Trevor are already in the NHL, thinks he could be starting in the ECHL next season after the weird conclusion to his college career.

“Being a senior, it was really weird to hear that your college career was going to be over while you still had games left on the table,” he said.

With the remainder of the ECHL season cancelled, the American Hockey League pausing along with the NHL and the real possibility of hockey into late summer, some of these players’ next games could be months away. The 2020 draft set for June was postponed, and agents doubt teams will hold the development camps that usually take place in July.

Rueschhoff is trying to stay in shape. Biro, after not even getting the chance to say goodbye to nine fellow seniors at Penn State, is stuck at a friend’s place in Ottawa after crossing the border because of Canada’s quarantine regulations before he can return home to Edmonton.

At least those players and the others who signed can now look forward to a pro career — eventually.

“It’s unfortunate you can’t get rolling into pro hockey right away, but it’s OK,” Mackey said. “It happens. You just can’t plan for this stuff.”