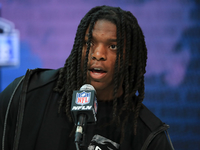 One of this year’s top receiving prospects is going under the knife ahead of the draft.

The Buffaloes wideout’s timetable for recovery is six to eight weeks, Rapoport reported. Shenault should be healthy well before the start of the 2020 season.

Shenault participated in the NFL Scouting Combine on Thursday, running a 4.58-second 40-yard dash and logging 17 reps in the bench press. Teams were informed of the injury and Shenault’s surgery on Saturday morning.

Before his injury was known, NFL.com draft analyst Chad Reuter listed Shenault as one of his losers from Day 1 of the combine.

“Shenault’s run-after-catch ability is among the class’ best, and no workout can (or should) take that away from him,” Reuter wrote. “However, on this occasion, he was unable to close the gap on the top-end receivers in the class.”

In 27 collegiate games over three seasons, Shenault racked up 191 touches for 2,223 yards from scrimmage and 17 total touchdowns.

Unfortunately, the resilient Colorado WR won’t be able to prove that at his pro day on March 11.