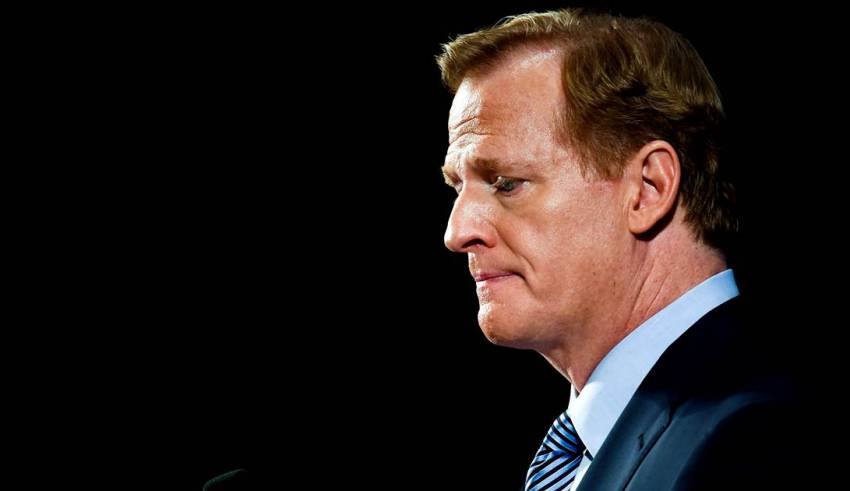 NFL commissioner Roger Goodell is being accused of hypocrisy and insincerity in his response to the death of George Floyd and the protests that followed across the country.

Critics pointed to the league’s handling of Colin Kaepernick and his protest against police brutality in 2016, saying Goodell and the league had deliberately stifled Kaepernick and so had no right now to appear to be siding with protesters and their cause.

On Saturday, Goodell addressed Floyd’s death and that of two other African Americans, Breonna Taylor in Kentucky and Ahmaud Arbery in Georgia, and the widespread outrage that has followed.

“The NFL family is greatly saddened by the tragic events across our country,” Goodell said. “The protesters’ reactions to these incidents reflect the pain, anger and frustration that so many of us feel.”

He continued: “As current events dramatically underscore, there remains much more to do as a country and as a league. These tragedies inform the NFL’s commitment and our ongoing efforts. There remains an urgent need for action. We recognize the power of our platform in communities and as part of the fabric of American society.”

Director Ava DuVernay, an ardent critic of the NFL, tweeted: “Shame on you. This is beyond hollow + disingenuous.”

“This is a lie,” she continued. “Your actions show who you are. You’ve done nothing but the exact opposite of what you describe here. Keep Mr. Floyd’s name out of your mouth. Shame on you + the ‘consultants’ of this travesty of an organization.”

Michael Shawn-Dugar, a writer for The Athletic, said on Twitter, “Colin Kaepernick asked the NFL to care about the lives of black people and they banned him from their platform.”

Floyd, a 46-year-old black man, died Monday after a white Minneapolis police officer knelt on his neck for more than eight minutes during an arrest. The officer, Derek Chauvin, was arrested Friday and charged with third-degree murder and manslaughter. He and three other officers involved in the arrest were fired the day after Floyd’s death.

Don Winslow, a crime and mystery novelist, also cited Kaepernick in his criticism of Goodell’s statement.

“I love pro football. But this message from the @NFL is completely RIDICULOUS. It’s laughable on its face,” Winslow tweeted. “A group of billionaire white guys who destroyed @Kaepernick7‘s career and punished and hurt the careers of black players protesting have no credibility to send this message.”

Get a head start on the morning’s top stories.

Kaepernick, then quarterback for the San Francisco 49ers, began kneeling during the National Anthem before games in 2016 to protest racial inequality and police brutality against people of color.

After no team signed him as a free agent, Kaepernick filed a grievance with the league, accusing owners of colluding to keep him from playing. In 2019, he and a former teammate, Eric Reid, who was the first player to join Kaepernick in protest, reached a settlement with the NFL.

Kaepnernick has not played in the NFL since 2016. Reid has.

In response to the criticism, the NFL said in a statement Sunday: “We would point you to our ongoing Inspire Change social justice effort which works closely with players and clubs and our partners at The Players Coalition and NFLPA. One of the key pillars of the work is improving community and police relations and criminal justice reform.”

The statement said Goodell “has also spent time working directly with players and law enforcement officials in their communities to understand the issues and identify areas where we can help bridge the relationship.”

CEO of 49ers is also criticized

Jed York, CEO of the 49ers, also came under scrutiny after he announced in a statement Saturday night, amid nationwide protests, that the team would donate $1 million to “local and national organizations who are creating change.”

“People throughout our country are hurting,” York said. “Emotions are raw, and rightfully so. Heinous acts have been committed in recent weeks. Before we are able to realize impactful change, we must first have the courage and compassion as human beings to come together and acknowledge the problem: black men, women, children and other oppressed minorities continue to be systematically discriminated against.”

York added that the team “is committing to support the legislative priorities of the Players Coalition,” an organization founded by NFL players in 2017 to oppose social injustice and racial inequality.

He also said York “begged” him not to kneel.

In subsequent tweets, Reid said, “One day y’all will realize that truth and justice are the answer.

“I see that a lot of y’all think that it takes money to get justice. It does not. It takes money to facilitate injustice. Justice is easy, the system chooses not to give it,” Reed tweeted Saturday night.

York did not immediately return a request for comment Sunday.

Ex-NFL exec says ‘it was wrong’ not to sign Kaepernick

In 2018, the NFL announced that it would fine players who did not stand during the national anthem or players could choose to remain in the locker room without penalty. The policy was shelved months later.

President Donald Trump had praised the policy but said it did not go far enough.

One former NFL executive, Joe Lockhart, said this weekend that “now is the moment to sign” Kaepernick and urged the Minnesota Vikings to do so.

“I was wrong. I think the teams were wrong for not signing him,” he wrote in an op-ed published Saturday by CNN. “Watching what’s going on in Minnesota, I understand how badly wrong we were.”

The NFL said in response Sunday: “Colin is a free agent. Clubs may sign him if they choose to do so.”

Lockhart, who was a league spokesman from 2016 to 2018 and a White House press secretary in the Clinton administration, said Kaepernick became the symbol of black men being treated differently than white men in America.

“That symbol of racial injustice was reinforced every day that Colin sat on the outside of the football world,” Lockhart wrote. “It may have seemed like a good business decision for the clubs to not sign him, and it certainly wasn’t illegal, but it was wrong.”

“Actually now is the moment for Roger Goodell to step to a microphone and offer a full and complete apology to Mr. Kaepernick,” Ifill tweeted Saturday. “To announce his commitment to supporting Mr. Kaepernick’s charities. And to signing Mr. Kaepernick to an NFL team.”