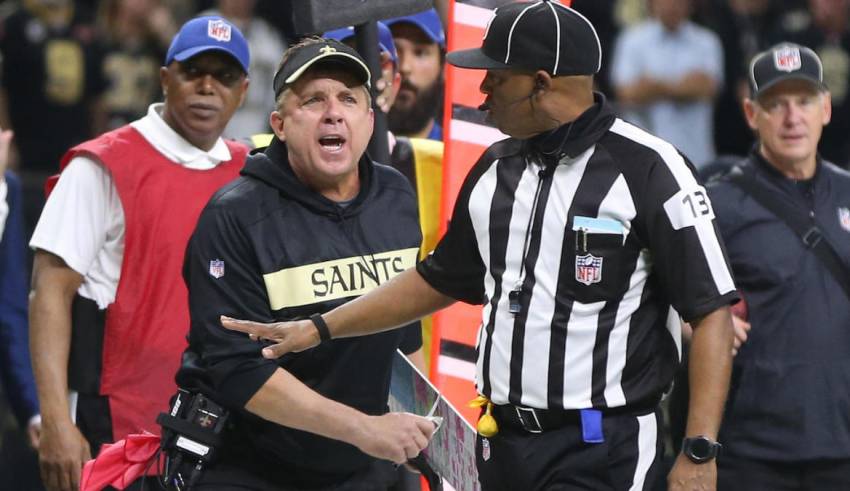 When the NFL decided to revamp its replay system this year by giving coaches the ability to challenge interference calls, no one could have predicted that it would turn into a total disaster, but after 12 weeks of play, that’s exactly what has happened.

No one knows more about the new rule than Saints coach Sean Payton. After all, the rule only changed, because his team got hosed over on an interference no-call during the NFC Championship game in February. Payton is on the NFL‘s competition committee, so he actually helped lead the charge to get the rule changed, which he now might be regretting, especially after what happened to his team during the Saints’ 34-31 win over the Panthers on Sunday.

During the game, not only did Payton lose an interference challenge, but he also watched Panthers coach Rob Rivera win a pivotal interference challenge in the fourth quarter. Following the win, Payton took a not-so-subtle shot at NFL vice president of officiating Al Riveron and the other officials who are in charge of replay in New York.

“It wasn’t our best game and by far it wasn’t their best game,” Payton said, via NOLA.com. “And quite honestly, it wasn’t New York’s best game.”

After watching the NFL struggle to consistently enforce its interference replay rule, Payton has a suggestion on how to fix it: Put multiple people in charge. Instead of letting one person decide whether or not a pass interference play should be overturned, the Saints coach would like to see three to five people make that decision.

“You know, we don’t have one Supreme Court justice,” Payton said, via ESPN.com. “It doesn’t have to be a committee. I don’t like committees. I just think it’s quiet when it’s singular. … I know when we put together a third-down plan, I might have a few ideas. But I’m gonna ask [offensive coordinator Pete Carmichael Jr. or quarterbacks coach Joe Lombardi], ‘What do you guys think?’ That interaction helps you arrive at better decisions. And I think clearly we would benefit from that. Because look, Sunday’s a long day.”

Payton didn’t directly bash the job that Riveron is doing, but he did seem to hint that the league could be doing better. In an interview over the weekend with Pro Football Talk, Payton said putting more eyes on each play would help officials get the call right.

“I think it’s a challenge for Al, it’s a challenge for New York when we go to New York and quite honestly, I think the numbers looking at those plays from a consistency standpoint need to be — it’s hard to be singular in that position, it’s hard for one person,” Payton said. “[Thursday] night, when [Saints coaches] meet on a phase of our game, you know there’s going to be four or five voices that can have thoughts and opinions that can help you arrive at decisions than one person, and I think Al does a great job and yet I think that number needs to be more of three or five, where we’re looking at it and we’re taking in all the things we’ve discussed, but clearly there’s a standard right now and we just have to pay attention to right now because that applies to everyone.”

Although it might be too late to implement Payton’s idea for the regular season, it’s something that the NFL should take into consideration for the postseason. Putting three to five guys in charge of each challenge would likely ensure that the correct call is made on the field. If five guys can agree that a penalty is a penalty, then it’s probably a penalty.