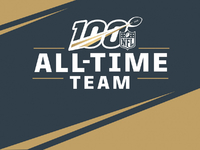 The NFL is revealing the 100 greatest players and 10 greatest coaches in NFL history. Every Friday night at 8 ET through Dec. 27, NFL Network will announce the latest members of the All-Time Team during a one-hour special hosted by Rich Eisen and featuring Bill Belichick and Cris Collinsworth.