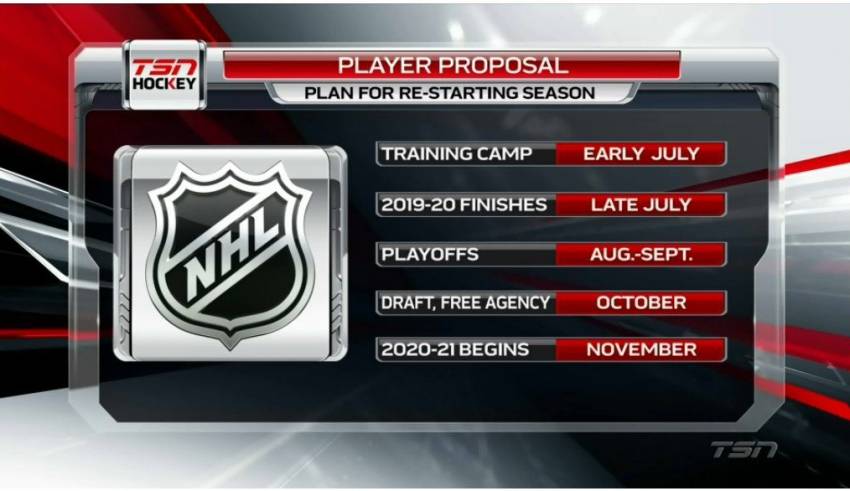 According to TSN, there is a lot of talk going on among NHL players as to how they can save the rest of the 2019-20 season. From that came one radical and aggressive proposal. The idea is that we would see the league play the remaining of the regular season in July with the playoffs going in August and September. This would allow for an offseason in October and would push the start of the 2020-21 season to November.

The proposal includes a “full 82 game season on a condensed schedule” next year.

It is believed that this plan has made it’s way to the NHLPA where it will be tweaked in an attempt to have it officially proposed to the league in the next few weeks.

This is not an official proposal from the Players Association to the league and it’s very clearly flawed from a CBA perspective, but it shows us that players are thinking outside the box when it comes.

According to Frank Seravelli of TSN, “the NHL is ready to consider any and all options” when it comes to making up for lost time.

Further to this report, Pierre LeBrun has spoken to at least one NHL governor who has identified October as the ideal “offseason” if the league were to re-start the season. He mentions that it’s a poorly kept secret that many American teams – particularly in the South – prefer not to have many home games in November anyway, so starting next season in November would “make the best of a bad situation”.

LeBrun mentioned that this same governor believes the longer the NHL waits the better. If the league rushes back to games in May, all it would take is one positive COVID-19 test and things would have to shut down again – and likely for a lot longer. If they let more time pass, the global pandemic might not be solved, but we will be in a much better situation in terms of protocol and treatment of the virus.

There is still a ton we can’t know. Thanks to the near-complete lockdown of many places in North America, things are changing on an hourly basis, so a proposal that makes sense now might not make sense next week.

Maybe we see a few more regular season games, Maybe we jump right into the play. Maybe there is no way to save the season at all. One thing is certain, the NHL players and teams are going to look for any way possible to hand out the Stanley Cup in 2020.

Would you watch hockey in August?