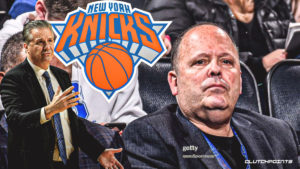 The loosest of drop-dead dates on completing the 2020 NBA Finals is Labor Day weekend in early September, per Adrian Wojnarowski of ESPN.

The NBA suspended the season two weeks ago after Utah Jazz center Rudy Gobert tested positive for the coronavirus:

The loosest of drop-dead dates on completing the NBA Finals is Labor Day weekend in early September, sources say, which teams say necessitates games starting back up by July 1 — and practice facilities reopening weeks before that.

No one in the NBA wants to be tied to Labor Day weekend, because no one — not the commissioner, not the teams, not the NBPA — wants to limit the possibility of the NBA salvaging something of a season. If the NBA season could start later in July and finish later in September, well, no one is ruling out that idea either.

NBA owners want to play the 2020 playoffs in its entirety since the postseason is where the league makes most of its money.

As it stands, the Milwaukee Bucks have the best record in the league again, while the Los Angeles Lakers are in second place with the top record in the Western Conference standings.

All of our content can be found on the NBA section of the ClutchPoints home page here. For all of our college basketball content, click here.