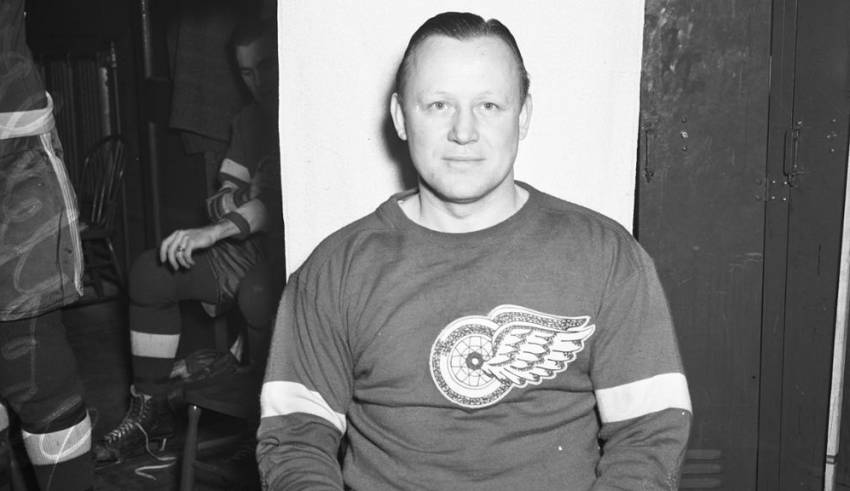 Legendary hockey reporter and analyst Stan Fischler writes a weekly scrapbook for NHL.com. Fischler, known as “The Hockey Maven,” shares his humor and insight with readers each Wednesday.

This week, Stan looks at the Detroit Red Wings of the late 1930s, the first U.S.-based team to win the Stanley Cup in consecutive years.

When hockey historians talk about Detroit’s first dynasty, they inevitably refer to the Gordie Howe-led Red Wings of the early 1950s. Those teams won the Stanley Cup four times in six years and won the Prince of Wales Trophy for seven consecutive seasons by finishing first in the regular season from 1948-49 through 1954-55. The roster put together by general manager Jack Adams overflowed with future Hall of Famers, including Howe, Ted Lindsay, Sid Abel, Terry Sawchuk, Alex Delvecchio and Red Kelly.

But 15 years before that group made life miserable for opponents, Adams’ Red Wings from 1935-37 were headliners in their own right. Detroit finished first in the NHL in 1935-36, then won the Stanley Cup. For good measure, they repeated both accomplishments in 1936-37. No other team had accomplished both feats in consecutive seasons, and it didn’t happen again until Detroit did it in 1953-54 and 1954-55.

Sportswriters who covered baseball and hockey in those years likened Adams’ Red Wings to the New York Yankees, who won the World Series in 1936 and 1937. Adams begged to differ.

“Wrong!” he would snap. “We’re not the Yankees of hockey. The Yankees are the Red Wings of baseball.”

Adams would underline his argument by pointing out that his top line, featuring Marty Barry, Herbie Lewis and Larry Aurie, was regarded as the NHL’s best, with Barry and Lewis earning induction into the Hockey Hall of Fame. Right behind them were some impressive attackers, including Hall of Famer Syd Howe (no relation to Gordie), as well as sharpshooters such as John Sorrell, Hec Kilrea and an oversized (for that era) forward named Ebbie Goodfellow who terrorized enemy goalies.

“Goodfellow was Gordie Howe before Gordie Howe came along,” a member of the 1950s Red Wings high command once noted.

Goalie Normie Smith was no slouch either. On the night of March 24-25, 1936, Smith was in goal for the longest game in NHL history – and he didn’t allow a goal. Facing a powerful Montreal Maroons team in the first round of the Stanley Cup Playoffs, Smith got the 1-0 win when Mud Bruneteau scored at 16:30 of the sixth overtime period. It remains the longest NHL game ever played. When Bruneteau scored, the time on the Forum clock was 2:25 a.m.

The defensemen Adams sent on the ice on those Cup-winning teams might not have been as prestigious as Hall of Famers Kelly and Marcel Pronovost from the 1950s group. But neither Kelly nor Pronovost could hit as hard as Bucko McDonald, a hulking presence whose body checks were so lethal that his real name (Wilfred) has long since been forgotten.

During the marathon playoff game against the Maroons, McDonald made a small fortune — by NHL standards of the day — with his booming body checks, often by using his abundant chest as an extra weapon. McDonald knocked down a Montreal player on the average of every five minutes. He explained later that he had a self-appointed “bodycheck scorer” vouching for his consistent bombardments.

“An oil dealer from Detroit had offered me five dollars for every knockdown,” he said. “We agreed on a limit of $200. I didn’t quite make it, but he did pay me $185, which was fine. The thing is the guy never figured that I’d have so many overtimes to connect. Also, the ice got slushy as the overtimes came and went, so that made it easier for me to line up the Maroons for my hits.”

Inspired by the marathon win, the Red Wings swept the Maroons in three games, then won the Stanley Cup for the first time since entering the NHL in 1926 by defeating the Toronto Maple Leafs, winning the best-of-5 Final in four games. The Cup-winning victory, a 3-2 win in Game 4, came at Maple Leaf Gardens. Red Wings owner James Norris hosted a victory party at a Toronto hotel where NHL President Frank Calder presented him with the Stanley Cup. This was most appropriate because had it not been for Norris there’d be no Red Wings.

After the Great Depression began in 1929, Detroit’s auto industry was hard hit and so was attendance at Olympia Stadium — Adams once allowed a fan into a game in exchange for five bags of potatoes.

“If the greatest star in the game was made available to us for $1.95,” Adams said at the time, “we couldn’t afford him.”

That financial situation abruptly changed in 1933 when Norris, a hockey-loving Canadian grain millionaire, bought the team, then known as the Detroit Falcons. The first thing he did was change the name to something more familiar to him. Norris was an ex-hockey player for the Montreal Amateur Athletic Association’s Winged Wheelers and admired the team’s insignia. Since the winged wheel also symbolized Detroit’s main industry at the time, Red Wings filled the bill.

With Norris’ seemingly endless bankroll at his disposal, Adams opened his checkbook and began spending. He bought Syd Howe from the St. Louis Flyers for $35,000. Kilrea was obtained from Toronto for $17,000 — and those were just for starters.

“Pops (Norris) was the bankroll and the boss,” Adams said, “and after he took over, Detroit hockey never looked back.”

Following their first-place finish in 1935-36 and subsequent Cup victory, Adams took aim at a second title. Despite injuries to key players the Red Wings finished first in the American Division for the second straight season. Their 59 points were the most in the NHL and made them favorites to repeat as Stanley Cup champs. With Adams behind the bench, they obliged with a 3-2 series victory against the Montreal Canadiens and a second trip to the Cup Final, this time against the New York Rangers.

The Red Wings sustained a double loss in Game 1 at Madison Square Garden. Not only did they lose 5-1, but Smith had to leave because of a serious elbow injury and was ruled out for the remainder of the best-of-5 series.

Not much was expected from his replacement, a 10-year minor league journeyman named Earl Robertson. Much to everyone’s surprise, Robertson was not only competent despite making his NHL debut in the Stanley Cup Final — he was the star. He’d likely have won the Conn Smythe Trophy as playoff MVP had it existed back then after helping the Red Wings win three of the next four games and the Cup, including a 1-0 victory in Game 4 and a 3-0 win in Game 5.

But riding high and primed for a third straight Cup title, Adams made the biggest mistake of his managerial career. He sat back, took a few puffs on his cigar and figured, “Why not again — with the same lineup?”

That might have looked like a good idea on paper, but on the ice it was a different story. Olympia Stadium fans booed as the defending champions played nothing like a team that was coming off back-to-back championships. The Red Wings plummeted faster than a cruise ship’s anchor and finished last in the American Division in 1937-38, missing the chance for a three-peat.

Adams took a look in the mirror and blamed nobody but himself.

“My mistake,” he allowed in retrospect, “was in standing pat when I should have been dealing. The lesson I learned was never hesitate to break up a championship club.”

He made good on his vow and earned the nickname “Trader Jack” as he went on to build the team that won four championships in the early 1950s.