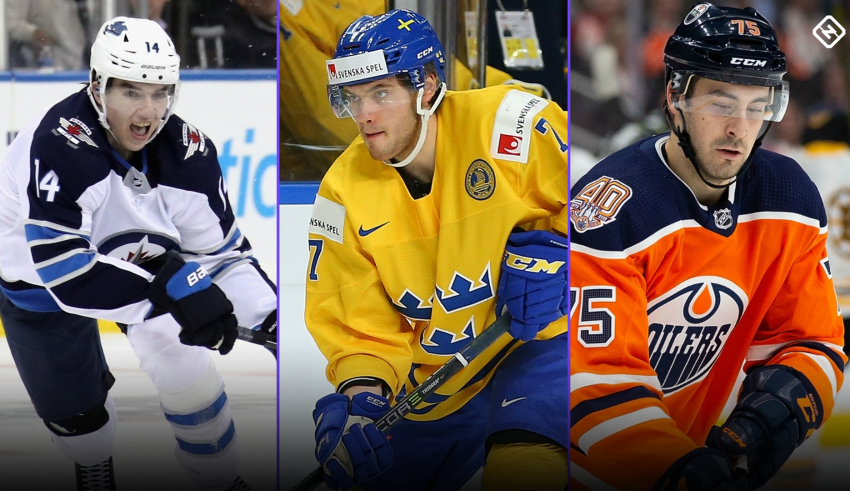 The coronavirus pandemic hasn’t just seriously disrupted the ongoing NHL season, it also has stymied the development of an entire group of prospects.

The cancellation of seasons by almost every junior and minor pro hockey league means that players have lost opportunities to showcase their talents. It’s also likely that the development camps typically held over the summer will be postponed or canceled.

On the other hand, it means that the next time we get to see some of the sport’s best prospects suit up could be in the NHL.

With that in mind, here are the three best NHL prospects in each of the seven Canadian teams’ farm systems.

Jakob Pelletier, LW. The Flames have seen a number of prospects graduate to the NHL in recent years; Pelletier could be the next one to move up. The 19-year-old is a skilled offensive playmaker with an eye for the net despite being undersized (5-9, 160 pounds). Pelletier was highly productive with the Moncton Wildcats in the QMJHL this season, tallying 82 points (32 goals, 50 assists) in just 32 games.

Dmitri Zavgorodniy, LW. Calgary’s seventh-round pick in the 2018 draft has turned into one of the organization’s top prospects thanks to two highly productive seasons with the Rimouski Océanic of the QMJHL. After putting up 64 points in 67 games last season, the Russian had 67 points (29 goals, 38 assists) in just 40 games this season despite suffering a collarbone fracture in November. Those stats may have been padded by playing on the same line as presumed No. 1 overall pick Alexis Lafreniere, but Zavgorodniy has shown plenty of potential in his own right. He, too, is just 5-9, but he is technically gifted.

Juuso Valimaki, D. The Finn made 24 appearances for the Flames last season, including two playoff games against the Colorado Avalanche. He missed all of this season with a torn ACL, so it remains to be seen whether he can continue his development, but he has the look of a reliable NHL defenseman.

Evan Bouchard, D. Bouchard has made seven appearances for the Oilers, all of them last season. He’s big, he’s strong, he’s smart, he’s good with the puck, he’s a great skater and he has great defensive positioning. What more could you want from a blueliner? He put up 36 points (seven goals, 29 assists) in 54 games with the AHL’s Bakersfield Condors this season.

Philip Broberg, D. Another star in the making, the 18-year-old is a great skater with tremendous speed and is smart with the puck. Because he’s so young and still has no experience in North America (he has spent his entire career in the Swedish league), Broberg will likely try his hand in the minor leagues before making the step up to the NHL.

Raphaël Lavoie, C. Lavoie recently put pen to paper on an entry-level contract with Edmonton, which sets the stage for his NHL debut in the near future. A big, strong forward with a tremendous shot, the Quebec native tallied 82 combined points (38 goals, 44 assists) in just 55 games with Halifax and Chicoutimi in the QMJHL this season.

Cole Caulfield, C. Caulfield may be extremly undersized at 5-7, but he also may be the most potent goal-scorer in his class. He’s capable of beating goalies with devastating power and accuracy. He has thrived at every level so far in his career, most recently in the NCAA with the University of Wisconsin. The Canadiens getting him at No. 15 overall in the 2019 NHL Draft was highway robbery; most experts considered him a top-10 talent. He will likely make his NHL debut in the relatively near future.

Josh Brook, D. Brook gained attention last season with 76 combined points (16 goals, 60 assists) in 66 games for Moose Jaw in the WHL and the Laval Rocket in the AHL. His stats declined significantly this season at Laval, but he still has tremendous upside. He’s a solid defensive player who’s also comfortable moving the puck. He may not be in the NHL next season, but his arrival might not be not too long after that.

Cayden Primeau, G. Primeau is on this list because of his sheer growth as a prospect after being a draft afterthought (seventh round in 2017). He seized the starting job for Laval and has made two appearances (both starts) for the Canadiens this season. Once named the NCAA’s best goaltender at Northeastern, Primeau put up a .908 save percentage in 33 games for the Rocket. With Carey Price being so shaky, the young American could get a proper NHL chance soon.

Drake Batherson, C. With 43 games of NHL experience, Batherson barely qualifies for this list. He’s here because he has spent most of his time playing for the AHL’s Belleville Senators. The 21-year-old had another good minor league season in 2019-20, tallying 54 points (16 goals, 38 assists) in 44 games for Belleville. He has gotten a lot of minutes at the NHL level, and he’s on track for more in the future.

Logan Brown, C. Brown takes full advantage of his size (6-6, 220 pounds) at both ends of the ice. He’s physical and possesses a nice shot. He’s at his toughest when he’s battling along the boards, and he can be a good passer at times. He, too has NHL experience, with 23 appearances for the Senators this season. Given his upside, Brown should be a useful asset as the Senators move forward with their rebuild.

Josh Norris, C. Norris burst onto the scene this season with 61 points (31 goals, 30 assists) in 56 games for Belleville. Previously considered more of a pass-first player, he showed impressive goal-scoring ability in his first year as a pro. That could earn him additional NHL minutes as early as next season.

Timothy Liljegren, D. Rasmus Sandin could have occupied this spot, but given that he played more for the Maple Leafs this season than the AHL Marlies, we’ll consider him someone who’s already playing at the NHL level. Liljegren has played just 11 times for the Leafs this season compared to his 40 appearances for the Marlies. The 20-year-old Swede has the potential to be a fantastic offensive blueliner with his great stickhandling and skating ability. If he can improve his decision-making skills, then he should receive regular minutes at the next level in no time.

Nicholas Robertson, C. After a couple years of gradual improvement, Robertson exploded this season in the OHL with the Peterborough Petes, putting put up 86 points (55 goals, 31 assists) in just 46 games. He is a shifty, relentless skater who tends to chirp. Now that his goal-scoring instincts have drastically improved, he could gain some attention from the Leafs’ front office.

Joseph Woll, G. Woll is arguably Toronto’s best goaltending prospect. An injury to Ian Scott gave him an opportunity to stake a claim for NHL minutes this season. Woll didn’t quite seize that opportunity — he posted a 3.75 GAA in 32 games for the Marlies — but the franchise is still high on a player with lots of potential.

Vasily Podkolzin, RW. Podkolzin is an aggressive, in-your-face type who also has skill. He’s strong on the puck and can bash through players on his way to the net, but he can also create chances and make opponents miss with his stickhandling. He has played 30 times for SKA St. Petersburg in the KHL this season as an 18-year-old, collecting eight points (two goals, six assists).

Nils Höglander, LW. Unlike Podkolzin, who is just as happy to go through opponents as he is to go around them, Höglander is an agile and elusive skater whose skills on the puck are close to the top of his class. The Swede is a creative playmaker who’s known for both his assists and his goals. He’s undersized (5-9, 185) but isn’t afraid to get physical. Like Podkolzin, he is an extremely promising prospect who could be suiting up for the Canucks in the near future.

Jett Woo, D. An up-and-coming player in Vancouver’s farm system, Woo has both skating and scoring ability, which can help him carve out an NHL career. He has put up 112 points (19 goals, 93 assists) in the WHL over the past two seasons with the Moose Jaw Warriors and Calgary Hitmen. He could be the Canucks’ next Quinn Hughes in a year or two.

MORE: How will season pause affect the NHL schedule, off-season and salary cap?

Ville Heinola, D. The 19-year-old Finn heads a strong group of young Jets defensemen. He is an offensively astute blueliner who is poised and smart with the puck. Heinola racked up five points (one goal, four assists) in eight appearances for the Jets at the beginning of this season. Since then, he has spent much of his time playing for Lukko in the Finnish league, with seven assists in 29 games.

Dylan Samberg, D. The sturdy 6-4 blueliner, a second-round pick by Winnipeg in the 2017 draft, opted to return to college at Minnesota-Duluth this season; had he chosen to go pro, he may well have gotten his first NHL action because of the Jets’ issues on defense. Another year of honing his skills in the NCAA probably didn’t hurt his development too much, though. He put up 21 points (one goal, 20 assists) in 28 games for UMD.

Kristian Vesalainen, LW/RW. A big, fast, versatile offensive threat, Vesalainen is arguably the best forward in the Jets’ farm system. He’s known for being a physical presence on the offensive end as well as possessing a solid shot. He put up 30 points (12 goals, 18 assistss) in 60 games this season for the Manitoba Moose of the AHL.