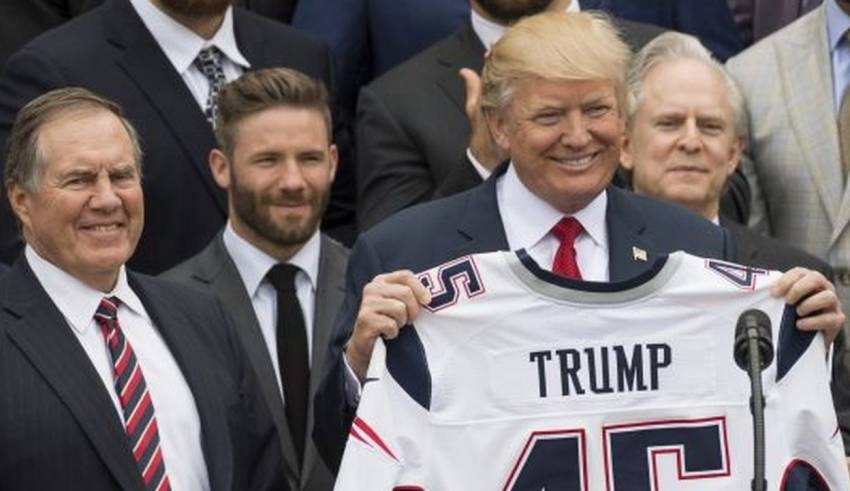 In a conference call with the leaders of the United States’ major professional sports leagues, President Donald Trump told NFL commissioner Roger Goodell that he thought the pro football league would kick off its 2020 season on time, ESPN reported.

The kickoff to the college football season, which traditionally begins earlier than the NFL’s regular season, was not specifically on the agenda. ESPN reported Trump told the sports leaders during the Saturday call that he hopes fans will be back at games by August.

But during his press briefing on Saturday, the president did not commit to a date for sports to reopen.

“Absolutely, I want fans back in the arenas,” Trump said. “Whenever we’re ready, as soon as we can, obviously. And the fans want to be back, too. They want to see basketball and baseball and football and hockey. They want to see their sports. They want to go out onto the golf courses and breath nice, clean, beautiful fresh air.

“I can’t tell you a date, but I think it’s going to be sooner rather than later.”

The NCAA, which canceled its men’s and women’s basketball tournaments and its spring sports schedule, was not one of the organizations participating in the call.

The NBA and NHL stopped their seasons, Major League Baseball delayed the opening of its 2020 campaign and other sports came to a standstill as the nation grapples with the coronavirus pandemic.

The NFL plans to announce its 2020 schedule by May 9. The first game of the regular season would be played on Sept. 10, the first Thursday night after Labor Day, during a normal year.

After a conference call with NFL owners on Tuesday, Jeff Pash, the league’s executive vice president, said: “All of our discussion, all of our focus, has been on a normal traditional season, starting on time, playing in front of fans, in our regular stadiums and going through a full 16-game regular season and full set of playoffs. That’s our focus.”

On Saturday afternoon, Gavin Newsome, the governor of California, told CNN that he did not anticipate the NFL season opening on time in his state — at least, not with fans in the stands. Three NFL teams are based in California

“The president recognized the good work being done by many teams and players to care for their communities, workforces and fan bases across the nation,” a White House pool report said. “The commissioners thanked President Trump for his national leadership and for his interest in the sports industry. President Trump encouraged them to continue to support their fellow Americans during this challenging time.”

· Mack Wilson wants to ‘be the guy’ for Cleveland’s defense

· Chargers coach on Cam Newton: ‘We’re looking at everybody’

· Steelers have Minkah Fitzpatrick instead of first-round uncertainty

· Levi Wallace asks those needing ‘a comforting voice’ to call him

· Who’ll be in line to cash in during NFL free agency next year?

· Dre Kirkpatrick ‘sitting back’ until next NFL opportunity

· Antonio Brown tells Julio Jones to ‘look up the stats’

· Daniel Carlson looking forward to kicking in ‘the Death Star’