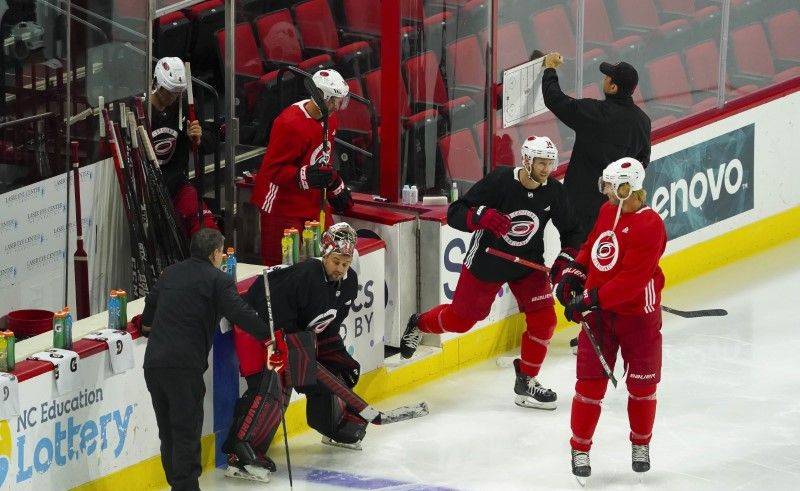 TORONTO (Reuters) – There were goals and fights but no spectators or protests as the Carolina Hurricanes beat the New York Rangers 3-2 on Saturday and the National Hockey League delivered a businesslike relaunch of its coronavirus-hit season.

The first game since the COVID-19 pandemic halted play on March 11 got off to an explosive start as the Hurricanes’ Jaccob Slavin potted the first goal 61 seconds into the contest and quickly saw the Rangers’ Ryan Strome and Carolina’s Justin Williams dropping the gloves and pummeling each other.

It was the same scenario at the NHL’s other hub city in Edmonton where the Chicago Blackhawks spotted the Oilers an early goal before racing to a 4-1 first period lead and cruising to a 6-4 win.

In other early action the New York Islanders jumped out to a 2-0 lead then held on to edge the Florida Panthers 2-1.

“During those 142 days, while our games stopped, the world changed. And we had to change with it,” said NHL commissioner Gary Bettman in a statement. “Amid all the excitement about finally dropping the puck again this afternoon, we are all left a bit empty because you can’t be in the stands.”

The NHL made its return on a steamy Toronto holiday weekend afternoon and on the street it went largely unnoticed as crowds strolled past the arena on their way to the island ferries and a day in the sun.

But for hockey starved fans willing to a spend the day in front of a television there was plenty to dig into with five games on the schedule starting with the Hurricanes and Rangers in Game One of a best-of-five qualifying series that will see the winner through to the Stanley Cup playoffs.

The NHL’s return in Toronto was straightforward with only bare bones celebrations, a short welcome back video featuring celebrity fans before the national anthem.

Unlike the NBA, MLB and MLS there was scant recognition of the Black Lives Matter movement that has become a galvanizing cause for athletes around the world.

While NBA, MLB and MLS players have all taken a knee during the playing of the national anthem in a show of solidarity, not a single member of the Hurricanes or Rangers chose to protest.

In Edmonton, however, the Oilers and Blackhawks came together at centre ice while a video tribute played and the words “Listen”, “Change” and “End Racism” flashed.

Minnesota Wild defenceman Mathew Dumba, one of a handful of Black players in the NHL, then appeared and gave a speech and knelt during the U.S. anthem.

“The killing of George Floyd and ensuing demand for justice and equality that inspiringly swept our countries, required us to accept that what we have done to this point isn’t enough,” said Bettman. “So we must and will do more and be better to make our game a welcoming place for everyone.”

(Reporting by Steve Keating in Toronto; Editing by Daniel Wallis)