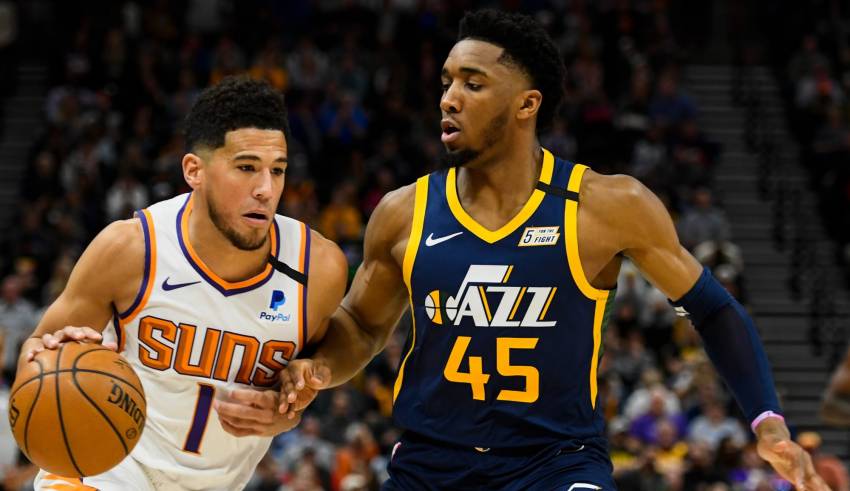 The Phoenix Suns and Utah Jazz duked it out against each other for the Western Conference’s top spot almost from start to finish last year. The Suns eventually proved themselves the more prestigious team, conquering the West and eventually advancing to the NBA Finals. However, the Jazz are still arguing their case.

Donovan Mitchell, far and away Utah’s brightest and most vocal star, spoke with Sam Amick of The Athletic earlier this week and cited his ankle injury as the main reason behind why his Jazz lost early during the NBA Playoffs despite possessing the best record from the regular season. He also proclaimed that if healthy, the Jazz would have won the NBA Finals, implying that his team would beat the Los Angeles Clippers, Milwaukee Bucks, and of course the Suns.

To Spida’s credit, he did try and avoid directly attacking the Suns with his comments and instead seemed more focused on simply supporting his team rather than anything else. You cannot fault great players for expressing self-confidence, and at no point did he come into the discussion with a sole intention to bash the Suns.

But still, anytime you make a comment naming yourself better than a specific team, let alone the defending Western Conference champs, it comes across as somewhat insulting in its own nature.

Given all the injuries which occurred last year, the Suns stand as no strangers to ludicrous takes arguing that they only “got lucky” by staying healthy, rather than actually earning their place as a Finals participant. These comments from Mitchell fall into that boat as well.

First and foremost, injuries remain deeply rooted within the game of basketball even despite their negative impact on it. But while most injuries indeed occur purely due to misfortune, that does not make those who avoid them “lucky” by any means.

Teams deserve credit for keeping their players healthy and conditioned, as it remains an important “game within the game” to monitor and apply care toward. If that were not true, then every team would not invest so heavily in doctors, trainers, and all the cutting edge medical equipment used at the NBA level.

But even with all that considered, the Suns still swept the fully-healthy Jazz during the regular season last year, winning both contests with Mitchell playing. The Suns also won their third and final contest against the Jazz last year, but Mitchell sat that one out, making it irrelevant to his initial argument.

Both the Bucks and Clippers can sympathize with the Suns regarding Mitchell’s comments, but it was the Suns who primarily saw the Jazz as their rivals last year given their tick-for-tack race within the standings. So for the Valley boys, it must feel a bit more loaded with regard to their relationship to Utah than anyone else.

Next year, the Suns play the Jazz four times, with the league moving back into its pre-pandemic scheduling tendencies. The series includes two back-to-back contests on Jan. 24 and Jan. 26 to open up things up. Hopefully, Mitchell enters those bouts at full strength—allowing the Suns to show him first hand that last year’s campaign came as no fluke.