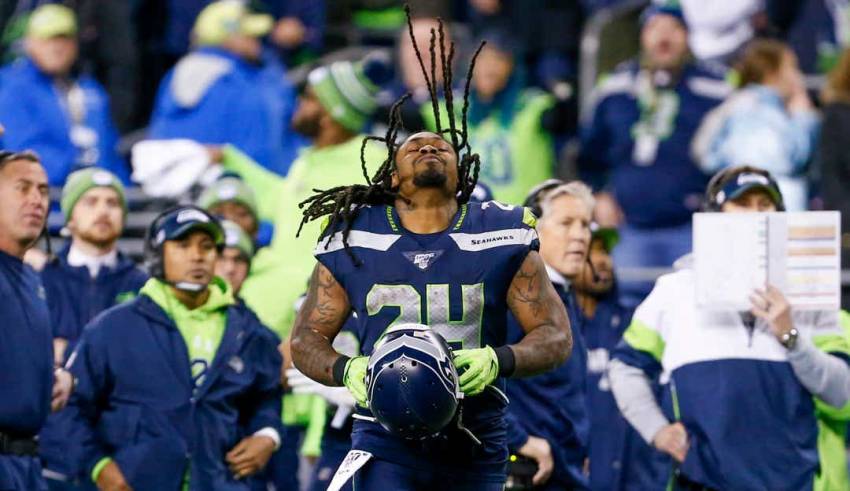 The NFL playoffs begin this weekend. They have 12 teams. We have 12 questions:

1.  Can you trust the Seahawks on the 1-yard line? Not in a big game. The goal line blunder in the final minute on Sunday night – a delay of game penalty pushed the ball back to the 6 – sparked memories of the horrendous sequence that lost Super Bowl XLIX. This time, it cost Seattle a division title and home playoff game. Maybe Marshawn Lynch is rusty, but he demonstrated earlier in the fourth quarter with a soaring 1-yard touchdown that he still carries some “Beastmode” mojo at the goal line – if he can just get the chance. After all the Seahawks did to position themselves for a comeback win against the 49ers, the mismanagement at the goal line in crunch time falls on coach Pete Carroll and coordinator Brian Schottenheimer. You’d think they’d know better by now.

2.  Can Mike Vrabel show the Titans what it takes to win in Foxborough? It was striking that Elandon Roberts on Sunday became the first Patriots linebacker since Vrabel to score a touchdown while playing on offense … while former Belichick pupil Brian Flores guided Miami to an upset win. Now Vrabel, the Titans coach, gets a chance to try beating his legendary former boss. Creative gimmick plays won’t be the key for the Titans. Yet Vrabel knows better than most that gashing Belichick’s defense with new NFL rushing champ Derrick Henry – who rushed for 211 yards and 3 TDs at Houston on Sunday – could be the difference. Belichick typically has the upper hand in matchups against former Patriots. But with Flores and Houston coach Bill O’Brien handing Belichick L’s during the past month, Vrabel is positioned to make it three straight.

3.  Is Lamar Jackson destined for a Super Homecoming with the Ravens in Miami? With Jackson undoubtedly establishing himself as the favorite to collect the NFL’s Most Valuable Player Award while sparking the Ravens to 12 consecutive victories, the bottom-line mission is to win a Super Bowl in his second NFL season – supported by a balanced team with an emerging defense. A newly minted MVP hasn’t won a Super Bowl since Kurt Warner capped the 1999 season in the winner’s circle with the Rams, but since Jackson has been bucking trends – he broke the single-season rushing record by a quarterback while leading the NFL with 36 TD passes – it would be fitting enough to close with a bang in Super Bowl LIV at Hard Rock Stadium, which is about 25 miles from Jackson’s hometown of Pompano Beach.

4.  Can the Packers win away from Lambeau? By one measure, the hottest team in the wide-open NFC field is sitting in Green Bay. The Packers have the NFC’s longest winning streak at five games and won back-to-back road games to lock up the No. 2 seed. Yet Green Bay’s worst loss this season came in a 37-8 thrashing at San Francisco in Week 12, which followed another West Coast stinker at the L.A. Chargers. If the Packers make it back to the Bay Area, they won’t survive without a much better reflection of Aaron Rodgers, who had a season-low 104 passing yards and was sacked a season-high 5 times when he last saw the 49ers.

5.  Is Dalvin Cook healthy enough to boost the Vikings? The shoulder injury that kept the star running back out of the past two games coincided with the back-to-back losses to close out the regular season for Minnesota. That’s not a good omen for January. When the Vikings have been at their best this season, quarterback Kirk Cousins was lethal with play-action passes that exploited defenses needing to account for Cook’s threat in the running game. And he’s provided much pop, too, as an outlet receiver. Without him, Cousins – mega contract or not — struggles to carry the offense. Balance is the ticket that controls the flow of the game.

6.  How much does losing a bye hurt the chances for the Patriots to get back to the Super Bowl? Tremendously. New England has advanced to nine Super Bowls during the Bill Belichick-Tom Brady era but has never made it that far without having a first-round bye. That’s why the upset loss against Miami on Sunday was so huge, dropping the Patriots to the No. 3 seed and ending a streak of nine consecutive years with a first-round bye. Since 2001, the Patriots are 27-7 in postseason with a bye, but just 3-3 without a bye. An even worse sign exists in an inconsistent offense that has struggled to establish an identity, struggled to protect Brady, struggled to create the type of matchup advantages it once had with now-retired Rob Gronkowski.

7.  Can the Saints avoid another heartbreaking elimination? Last season ended with the blown non-call of pass interference in the NFC title game. Before that, the “Minneapolis Miracle” left New Orleans reeling. Sean Payton & Co. has demonstrated much resilience in positioning for another run, but there will come an added layer of difficulty of needing to win outdoors after the first round if they are to truly make amends for the playoff gaffes of the past. The Saints hate the connotation that they are a “Dome Team,” yet it may take winning at Green Bay and San Francisco to dispel the tag.

8.  What’s the J.J. Watt factor worth for the Texans? A whole lot, provided that Watt – returning from surgery to repair a torn pectoral muscle — can perform at anywhere close to the level he’s demonstrated in winning three NFL Defensive Player of the Year awards. Watt returned to practice on Dec. 24 and has gradually increased his load. With Watt missing the final eight regular-season games, the Texans finished with just 31 sacks, tied with the Bengals for sixth-fewest in the league. His presence would also likely impact bookend rusher Whitney Mercilus, who had just 2 of his 7½ sacks this season – and began a career-long streak of 7 games without a sack – after Watt went down in Week 8.

9.  Will the Chiefs regret having the worst run defense in the playoffs? After squandering home-field advantage in the last AFC title game because it couldn’t contain Tom Brady in crunch time, the Chiefs spent much energy during the offseason to upgrade the defense. It’s taken some time to mesh, but lately the Steve Spagnuolo-coordinated unit has hit a sweet stride. Since Week 11, Kansas City has allowed an NFL-low 11.5 points a game while winning six consecutive games – the longest streak in the AFC after Baltimore. Yet Kansas City also brings the worst run defense of any playoff team (26th, 128.2 yards a game). Of course, if the Patrick Mahomes-driven offense lights up the scoreboard, the Chiefs could find themselves covering for the run defense with the pass defense. Either way, losing second-round rookie starting safety Juan Thornhill to a torn ACL is a blow that must also be covered for.

10.  Will the “Underdog” thing work again for the Eagles? Sure enough, the NFC Least champions open the playoffs against Seattle as underdogs on their own turf. Haven’t we been here before? The Eagles (9-7) may want to break out the dog masks that became a signature mark during their Super run two years ago. This time, there’s no Nick Foles. But they still have that underdog quality, with non-household names such as Greg Ward, Boston Scott and J.J. Arcega-Whiteside filling in to play major roles to offset the injury rash at the skilled positions. It’s also notable that Carson Wentz – injured for the playoffs in each of the past two seasons, giving way to Foles – has been phenomenal in utilizing the weapons (7 TDs, 0 INTs) during the four-game winning streak that secured the division title. If he continues with his minimal-mistake flow, the gritty Eagles have a chance. Remember, when they lost to the Seahawks at The Linc in November, Wentz committed four turnovers (two picks, two lost fumbles). Avoid that, different story.

11.  Have the 49ers had enough last-minute drama? You can’t say (and neither can we idiots who didn’t see it coming quite like this) that the 49ers haven’t earned the top seed in the ultra-competitive NFC. They have been battle-tested in pulling off a remarkable flip from the 4-12 finish last season, while demonstrating crunch-time poise. Before the thriller on Sunday night, each of their previous four games came down to the last play. And a loss against Seattle in October went to overtime. Sure, the close calls could have gone either way, but they’ve survived to ensure homefield advantage throughout the playoffs. No, nothing’s automatic about that, but coach Kyle Shanahan and GM John Lynch have built a complete team that includes a dominating defensive front, a potent power-rushing game, an emerging quarterback and, well, a flair for the dramatic.

12.  Are the Bills destined for another one-and-done playoff experience? At this point, it’s little more than a coincidence that second-year quarterback Josh Allen wasn’t even born the last time the Bills advanced past the first round of the AFC playoffs. But it’s still a fact Buffalo heads into the playoff opener at Houston with a streak of four consecutive defeats in the wild-card round – including the ancient history that was three such losses during the mid-to-late ‘90s. More recently, Bills coach Sean McDermott took the Tyrod Taylor-quarterbacked 2017 team to a first-round loss at Jacksonville. So, this is a new deal with just two starters on the Buffalo offense remaining from 2017 and a dynamic defense capable of turning the flow. Still, Allen is one of four quarterbacks in the field (Jimmy Garoppolo, Carson Wentz, Ryan Tannehill) set to make his first playoff start – a year after all three quarterbacks in a similar situation (Lamar Jackson, Deshaun Watson, Mitchell Trubisky) lost on wild-card weekend.