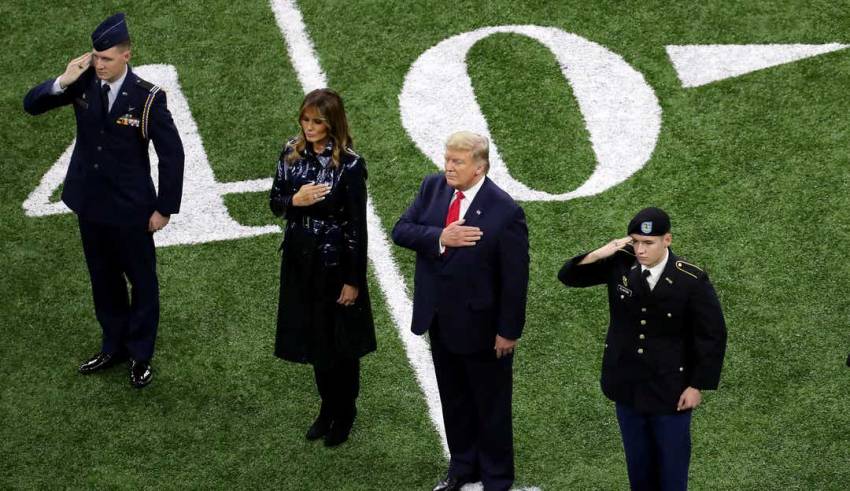 MIAMI — The NFL might not have seen the last of Donald Trump.

Despite being rebuffed in his efforts to buy the Buffalo Bills, and the leaguewide revulsion to his profane call to fire protesting players, Trump remains an NFL fan. And given the, oh, how shall we say it, intensity of his time in the White House, one associate said he could see the president trying to buy an NFL team again after he leaves office.

“I remember him telling me once, when we were meeting about the Buffalo Bills, he said to me, ‘Look at these guys. Do you see how much fun they’re having?’ ” said Michael Caputo, who helped Trump with his bid for the Bills and later was an adviser to his presidential campaign. “I know it’s not all fun and games. But I think after the presidency and the flames of politics he’s walked through, he might be looking for a little more fun.

“I think he’s found his life’s work,” Caputo added. “After the presidency, he’ll be looking for his life’s hobby.”

At first glance, Trump and the NFL would seem to be the most awkward of fits. His experience as an owner in the USFL was an unmitigated disaster. In fact, many involved in the league have said Trump led the USFL to ruin in hopes he could parlay it into buying an NFL team. Not exactly a trustworthy partner.

The NFL is also almost exclusively a billionaire boys club, emphasis on the billionaire, and it’s no longer certain Trump qualifies. His former attorney, Michael Cohen, has testified Trump inflated his net worth during his attempt to buy the Bills.

USA TODAY INTERVIEW: Antonio Brown says ‘I put myself in a bad predicament’

Then there’s the matter of where Trump’s money comes from. He might not disclose his tax returns to the American people, but the NFL wouldn’t approve any prospective owner without knowing the source of every dollar, ruble and riyal.

And, with the exception of Jerry Jones, most NFL owners prefer to stay in the background unless they’re hoisting a trophy. To say that isn’t Trump’s style is putting it mildly.

And yet, the NFL is also exactly Trump’s kind of people. Not the players, of course. More than two-thirds of the players in the league are black, and many have made no secret of their feelings about a president who has a penchant for demonizing people of color.

When the Eagles won the Super Bowl two years ago, in fact, they actually found themselves uninvited to the White House because so many players said they wouldn’t go. (Though, can you really be uninvited if you’ve already said you aren’t going to go?)

Asked during Monday’s Opening Night how they would feel about having Trump as an NFL owner, most players begged off the topic. But one, Chiefs fullback Anthony Sherman, said he’d have had no problem playing for Trump.

“I think he would have been a great owner,” he said.

San Francisco cornerback Richard Sherman wasn’t so sure. “A lot of owners aren’t as involved and aren’t as boisterous or around or seen by their teams,” Sherman said. “I’m sure he’d be more prevalent.”

For many owners, though, Trump’s management style, as well as his history of racism and bigotry, might not be a disqualifying factor.

Woody Johnson, owner of the Jets, is Trump’s ambassador to the United Kingdom. He and eight others donated to Trump’s campaign or inaugural committee.

In August, Dolphins owner Stephen Ross, then a member of the NFL’s social justice committee, hosted a fundraiser for Trump with tickets ranging from $5,600 to $250,000.

“He counts NFL stars and owners among his closest friends,” Caputo said.

So what of his blistering criticism of the league two years ago, during the height of the player protests? Besides it being perfect fodder for a stunt that could gin up his base – he ordered Vice President Mike Pence to walk out of a game because some 49ers players demonstrated during the anthem – it was actually an indication of just how badly Trump craves NFL approval. Kind of like the 6-year-old boy who pulls the hair of the girl he likes.

“He’s been elected president, where maybe a great goal he had in life to own an NFL team is not very likely,” Jaguars owner Shahid Khan told USA TODAY Sports at the time. “So to make it tougher, or to hurt the league, it’s very calculated.

“It’s about money, or messing with – trying to soil a league or a brand that he’s jealous of.”

One way or another, Donald Trump is determined to get his piece of the NFL.