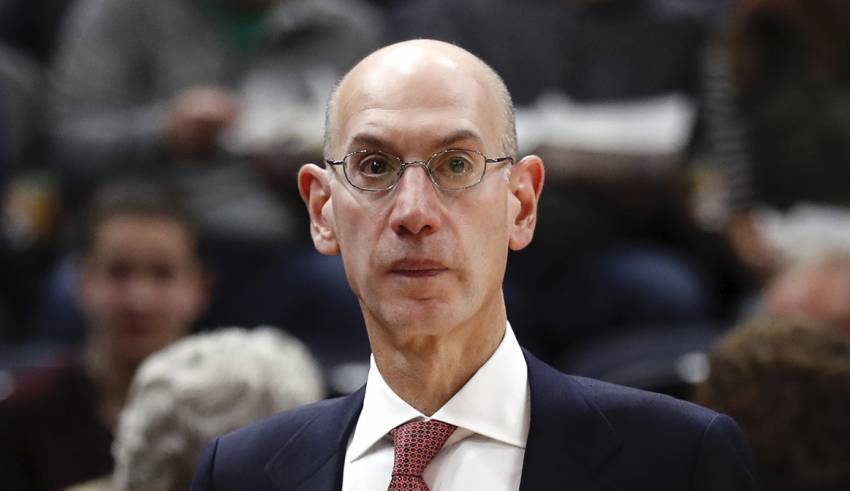 News, notes and observations while wondering if LeBron James has been filming a documentary of his own …

· The NBA is expected to issue guidelines in the next few weeks that will allow teams to begin recalling players who have left their markets, per ESPN, a step towards eventually getting players back into team facilities. The league would like to get teams back practicing by mid-June with an eye towards resuming the season in mid-July, sources familiar with the league’s thinking told SI.com. The NBA is still sorting out bubble locations, with Orlando and Las Vegas the top choices.

· There are still some hurdles here, though. On a call with local reporters, Lakers vet Jared Dudley said players won’t be confined in one location, but it will be made clear that if they leave and catch COVID-19, the coronavirus, they won’t be able to play. Huh? If true, that feels like a half-measure, and a weak one. Look: No one wants to be confined to one location, least of all a player on a top tier team, like Dudley, who could be confined for months. But quarantining is the best way—perhaps the only way—to ensure the coronavirus doesn’t disrupt a resumed season. What happens if one player, or a family member of that player, leaves the secure location and contracts the virus? What happens if that person spreads it to a few people … who spread it to a few more … who spread it to a few more. If we know anything about this pandemic, it’s that coronavirus is highly contagious. To me, it’s either a total lockdown or nothing at all.

· How do NBA players really feel about coming back? Money talks, so players will do it and team owners/executives will go along without complaint, knowing that not playing could be disastrous for the league financially. But the more league-types I talk to, the more I get the sense that in a blind vote the majority of the league would elect to scrub the season and pick up next year. Safety concerns are real, as is the fear among some executives about the risk of injury to star players dropped into a playoff situation after what could be close to four months off.

· The NBA is hell-bent on crowning a champion, and NBA commissioner Adam Silver—who has handled this crisis as well as anyone could—intends to do everything possible to protect the integrity of the postseason, including having each round scheduled for the full seven games. But there are many in the NBA that don’t see a July postseason as a resumption of the current season, but the start of a new thing. Teams will be different—Utah will be without Bojan Bogdanovic, who underwent season-ending surgery this week, while Philadelphia will likely have Ben Simmons back—and no one has any idea what they will look like when they come back. Some would prefer the league to define this year’s title differently, an NBA Cup of sorts.

· Does anyone really believe the poison pizza story from The Last Dance? Craig Fite, the alleged pizza maker, made the media rounds this week, swearing on a stack of Jordan jerseys (he’s a Bulls fan, by the way) that the pizza wasn’t poisoned. Fite claimed he made the extra pepperoni pie himself and delivered it, throwing cold water on the televised testimony that five guys carried it to the door. This story is bizarre on so many levels. First, how in the world would a pizza place know they were making a pie for Michael Jordan? Even if they knew the hotel was where the Bulls were staying, how do they know they weren’t delivering one for an assistant coach or some p.r. flack? Second, and no offense to pizza makers of America, but how many are chemists? Was there a foreign substance applied? Or did they undercook it just enough so that Jordan would eat it and still get poisoned. It’s perfectly possible Jordan suffered from food poisoning the next night. It’s implausible that it came from the pizza.

· Seems MJ’s former teammates aren’t taking too kind to their portrayals on TLD. Horace Grant called Jordan’s accusations that he was the source for Sam Smith’s famed book The Jordan Rules lies, called Jordan a snitch for remarks he made about former teammates and suggested they could settle it in the streets. Smith himself has denied Grant was a major source. Scottie Pippen is reportedly peeved over his portrayal. And I’d imagine Jerry Krause’s widow, Thelma, isn’t pleased that then Bulls GM Jerry Krause was cast as the villain in Jordan’s story.

· Much of the talk of the final episodes of TLD centered around the Bulls ability to bring the team back for one more season, something Jordan was adamant could have happened. No way. Maybe Jackson could have been convinced to return. And maybe Rodman, under the guidance of Jackson and the leadership of Jordan, would have been more than the shell of himself that played just 35 games over the next two seasons. But the idea that Pippen, who desperately wanted to get paid, would have settled for a one-year deal, is crazy, while Steve Kerr and Luc Longley both got career-best deals to play elsewhere that offseason. You can’t prove a negative, so there’s no way to say definitively the Bulls wouldn’t have done it, but the idea that a bunch of players would have sacrificed their financial futures just to chase one more title strains belief.

· None of this takes away from the masterful job TLD director Jason Hehir did in putting together this documentary. Hehir is a tremendous storyteller. Here’s hoping any future documentary projects involve him.

· Kudos to Jazz guard Mike Conley, who donated $200,000 to several communities, joining a growing list of NBA players who have done some fantastic things to help out during this pandemic.

· Keep an eye on what’s happening between MLB and its players over the next few weeks. As baseball tries to figure out its future, players have balked at MLB’s request for a 50-50 revenue split during this pandemic—players already agreed to pro-rate their salaries to account for missed games back in March—with several high profile players like Bryce Harper and Blake Snell suggesting that any revenue share was a non-starter, setting up what could be an ugly battle. The NBA likely won’t have that problem this season—most players have received more than 50% of their salaries anyway—but if the coronavirus pandemic is still raging next fall, and if buildings will be empty when games start, there will be financial consequences. Something to watch as things move forward.