It’s even tougher these days, with the coronavirus pandemic forcing the close of gymnasiums, fitness centers and parks. How do you find the right instruction? What are the right exercises? How do you stay motivated?

With the NHL paused since March 12 due to concerns surrounding the coronavirus, several teams are helping fans get moving again. The Boston Bruins, Florida Panthers. Vegas Golden Knights and Ottawa Senators are among those whose trainers, strength coaches, broadcasters and game presentation squads have developed workout videos, either on a daily or weekly basis.

“I think there was a dual purpose,” Bruins head performance coach Kevin Neeld said. “If people were consistently training and are now just looking for guidance on how to keep in a routine without the resources they’re accustomed to, then hopefully we can help with that. Also, people are just stressed and need an outlet to get their mind off some of the realities of the change. It’s just a way to de-stress. I think putting together something that hopefully would be fun to do was part of our purpose, too.”

Panthers senior vice president Shawn Thornton, a former NHL player who calls himself a “workoutaholic,” helped create several initiatives. Panthers head strength and conditioning coach Mike Donoghue did three videos in a span of two weeks. The Roar Corps members have done weekly videos which include yoga, HIIT workouts and dance moves. The Panthers also had the Territory Trot Virtual 5K in mid-April. For a $10 donation, which went to the Panthers Foundation’s COVID-19 relief efforts, participants were given several days to run a 5K and submit their time to the Panthers. Thornton wanted the workouts to be as beneficial to his staff as they were to fans.

“I’ve been approaching it sort of how I did during the lockout as a player: You don’t know when you’re going back to work, and you have to motivate yourself daily,” Thornton said. “So when this all comes to fruition and you’re back to work, the people who have been preparing, training, to get back to work are usually in a better position when we get there. And by the end of the day, whatever time that may be on any given day, it’s about feeling like you accomplished something. It makes these days go by a lot faster.”

Each team has a different approach to the workouts. The Golden Knights began their VGK Fit Challenge onMarch 24 with daily workout videos done by TV analyst and former NHL player Shane Hnidy, studio host Daren Millard, rinkside reporter Stormy Buonantony and play-by-play announcer Dave Goucher. Videos are approximately two to three minutes long, with the broadcasters performing repetitions of four moves. In the inaugural video done by Hnidy, he does 10 pushups, 20 squats, 20 sit-ups and 10 burpees. Participants are instructed to do that circuit as often as they can during 20 minutes.

Hnidy, who played 550 NHL games with the Senators, Nashville Predators, Atlanta Thrashers, Bruins and Minnesota Wild, said he wanted people to ease into the challenge.

“At the beginning, we can’t do too much. It can’t be a severe workout that’s going to have people stopping. So it’s go at your own speed,” said Hnidy, who also did a hockey skills edition of the VGK Fit Challenge with former NHL goalie turned Golden Knights analyst Mike McKenna. “Even when we got to the hockey drills, all you need is a stick. And if don’t have that, tape to put on the floor to do ladder drills. Just try to make it as basic as you can but still effective, so they can get something from these workouts.”

Giving as detailed an explanation of the exercises and their benefits as possible was important. Neeld, who did a five-part workout series in March and April, wrote a story for each circuit.

“I think when training information comes down from a pro sports setting, there’s always that question in the back of people’s heads that, ‘Hey, I’m not a professional athlete. I don’t know if I can do this,'” said Neeld, who began his series with core training on March 25. “And that was one of our biggest goals, to really develop that article series specifically for people who aren’t professional athletes, who really may need some guidance for getting back into a routine.”

Senators strength and conditioning coach Chris Schwartz said many may be doing their workouts with family members in a basement or other confined space. That’s why he’s doing the same with the Senators Power Hour, a boot camp occurring three days a week from May 18 to June 6. In the workouts, Schwartz instructs his wife Denise and one of his children, 13-year-old son Preston or 15-year-old daughter Paris.

“What we wanted to do is keep it simple. These aren’t the workouts I run with the players. But we do try to touch on aspects on different kinds of movements and different types of athletics. Multi-movement strength and conditioning type of work. But that being said, it’s based on minimal equipment. Some people can make use of it too, if they have some light dumbbells. And we’ve also modified it for people who have no equipment.”

And if people don’t have equipment, trainers suggest using items found around the house. Neeld used a towel for arm rows. Thornton said one of Florida’s most popular workout videos featured Donoghue using his Yeti cooler for various exercises, including hip bridges and single-leg squats.

“The coolers are fairly popular down here. He did a 20-minute session with it, and I think people got a kick out of that,” Thornton said. “You’re not allowed to get together on the beach right now, so what are you doing with the Yeti? You might as well put it to good use.”

Feedback for the workouts has been positive. The Panthers, who had 479 participants in the United States and Canada for their Territory Trot Virtual 5K, posted some runners’ videos on their Facebook page. The Golden Knights created a webpage featuring photos and videos of fans working out. The workouts have provided a healthy outlet for instructors and participants alike during a trying time.

“Every now and then I’ll get a chirp,” Hnidy said with a laugh. “It’s been positive, it’s been fun. We have a big content group, and we wanted to stay busy. I think it was sifting through ideas on what we wanted to do because there are a lot of us, and one thing we all agreed on is that it’s a difficult time when you don’t want to be stuck sitting all day, every day. So here are some simple things if you need [them.] If you need a little guidance, let us know how it went. I think the interaction’s good through social media, when you can react and go with your fans.” 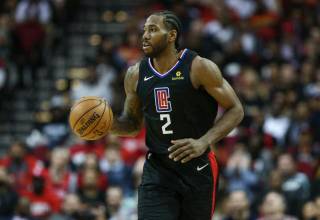