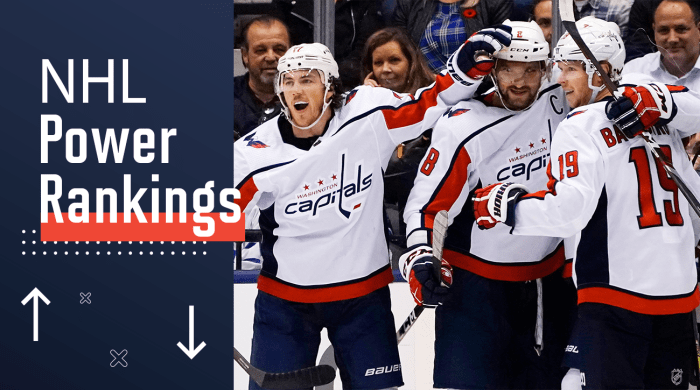 Offseason expectations engender apathy, cautious optimism or confidence. And now with the first month of the season finished, some of the predictions can be scraped away to get a clearer picture of the NHL’s hierarchy. It’s time for a reality check: The Bruins and Capitals are sitting where they want to be, the Leafs and Lightning are struggling to find consistency and the Sharks are … just struggling. October isn’t an end-all predictor for the rest of the season—ask the Blues and Golden Knights about that—but it’s a small-enough sample size to sort things out. Here’s how we see team’s stacking up this week:

Expectation: What’s below the cellar?

Reality: The Sens are the worst team in the league, but they aren’t historically bad. Their -10 goal differential is better than Sharks, Wild and Devils. Still, it’s never too early to watch tape on Alexis Lafrenière and Quinton Byfield.

Expectation: Prepare for the future.

Reality: At least the Kings won’t bore you to death: Los Angeles has registered at least 30 shots on net in all but two games. Anze Kopitar has played well, but this season is about allowing the next wave of Kings to grow, and make mistakes, on the ice.

Expectation: Remain in the playoff hunt.

Reality: The Rangers are still rebuilding. That’s O.K. Back-to-back wins against the Lightning and Predators feel good, but receiving contributions from Filip Chytil, Adam Fox, Anthony DeAngelo and Alexandar Georgiev are more important long-term. They’ve got that so far.

Reality: The long nightmare that was Paul Fenton’s tenure as GM ended, but the roster is still suffering the consequences. Bruce Boudreau deserves better.

Expectation: Rebuild, even with Jonathan Toews and Patrick Kane.

Reality: Adam Boqvist and Kirby Dach, the Blackhawks’ 2018 and ‘19 lottery picks, both earned surprise call ups while Chicago is sitting in a bottom-10 position, again. The Blackhawks have until 2023 to put together one last contending team in the Toews-Kane era.

Flailing shark! San Jose’s offense, loaded on paper, has stalled out, posting the sixth-fewest goals per game in the NHL. The Martin Jones–Aaron Dell goaltending tandem has surrendered the fourth-most goals per game. Not a good combo. At least their special teams are working.

Reality: Bust. The Devils’ goaltending has been terrible and the team can’t hold a lead. Hall criticized fans for booing the power play. This isn’t what anyone expected following an offseason filled with big-ticket acquisitions and New Jersey needs to get right, quick, to put themselves back on playoff track.

Reality: The Blue Jackets’ young core—led by Pierre-Luc Dubois, Seth Jones and Zach Werenski—has been enough to keep Columbus respectable, but not much more than that.

Expectation: Push toward a 100-point season

Reality: The 1-7-1 skid is over and Tyler Seguin, Alexander Radulov and Jamie Benn are starting to heat up. Breakout players Roope Hintz and Denis Gurianov have helped in the meantime, overshadowing Joe Pavelski and Corey Perry’s arrival.

Expectation: Turn into a playoff contender.

Reality: Wingers Travis Konecny and Oskar Lindblom are playing like first-line talents, while Ivan Provorov has replaced Shayne Gostisbehere as Philly’s No. 1 defenseman and power-play quarterback. Defense hasn’t been a critical weakness under new coach Alain Vigneault and the Flyers have played well while second-year goalie Carter Hart finds his footing.

Expectation: Don’t take a step back.

Reality: Winnipeg’s window is growing smaller by the game. Patrik Laine’s newfound playmaking ability is a pleasant surprise, but the team’s top line has stagnated and, after losing four defensemen in the offseason, there’s no help in sight for the Jets’ struggling blue line. The Dustin Byfulgien situation is going to get worse before it gets better.

Expectation: Avoid missing the playoffs three seasons in a row.

Reality: Jonathan Drouin has taken a step forward and the Canadiens are playing well, but there’s close to no wiggle room in a crowded Atlantic Division. Montreal had the most points of a team not to make the playoffs last year, and that could happen again.

Expectation: Reach the second round of the playoffs.

Reality: John Tavares’s return should help, but Toronto hasn’t fixed its team defense. The Leafs are too talented to be hovering around .500.

Expectation: With Sidney Crosby, anything is possible.

Reality: Evgeni Malkin, Patric Hornqvist, Nick Bugjstad and Alex Galchenyuk have all gone down with injuries, and then Kris Letang went down when Pittsburgh was finally getting healthy. The Penguins’ depth has kept them afloat, so far.

Reality: The Panthers haven’t lost a game in regulation when Bobrovsky has surrendered three or fewer goals. The problem? Their pricey Russian netminder has given up at least four goals in five of his first 11 starts. Florida, as a whole, is a bit tighter defensively and seems poised to make their first postseason since 2016.

Expectation: Recuperate after an injury-plagued season.

Reality: Darcy Keumper has played lights out but just as important, the Coyotes are scoring. The addition of Phil Kessel has worked as planned.

Reality: The Sabres have repeated last year’s early season success, this time going 9-2-2 in October. There aren’t any tricks: Jack Eichel has collected 17 points in 15 games, the goaltending has been good and the team has earned multiple comeback victories. Buffalo’s two-game stand in Sweden against the Lightning should be a proving ground for both teams.

Expectation: Build on postseason success and contend for the Stanley Cup.

Reality: After a hot start, injuries taking out Mikko Rantanen and Gabriel Landeskog as cable providers start to reach deals with Altitude TV seems like a twisted punishment on Avs fans. Colorado still has Nathan MacKinnon, but the Avalanche’s depth is going to be tested in this stretch without two of their stars.

Reality: In the franchise’s first two seasons, the Golden Knights were a dominant possession team and tough to beat at home. Neither of those things are true through 15 games, and Vegas’s hopes lie with Marc-Andre Fleury playing another 60-game season.

Expectation: Exit the rebuilding phase of the post-Sedin era.

Reality: Elias Pettersson, Brock Boeser and Bo Horvat lead a high-flying, electric offense and Quinn Hughes has emerged as a budding star on the blue line. This is as good of a start Vancouver could’ve hoped for and, even if the season goes south, there’s evidence that the core is in place to become a postseason factor again.

Reality: The Blues top the Central Division through 16 games. Jordan Binnington has avoided a sophomore slump so far, but Vladimir Tarasenko’s injury stings and lowers St. Louis’s ceiling in lieu of an acquisition.

Reality: Swapping P.K. Subban for Matt Duchene, and quite a bit of depth scoring, has turned Nashville into the second-highest scoring team in the league. Mission accomplished.

Reality: Is a 10-game winning streak enough evidence? Mathew Barzal has been the team’s best player, and that needs to continue to support Barry Trotz’s defensive shell.

Reality: With 51 combined points, Connor McDavid and Leon Draisaitl are capable of carrying the Oilers by themselves. They’ve done just that with a Pacific Division-high 22 points. However, Edmonton might not be able to rely on Mikko Koskinen and Mike Smith to continue to provide quality goaltending.

Reality: The only thing going better in D.C. are the Nationals beer-filled, shirtless celebrations. The Capitals reeled off consecutive wins against the Canucks, Leafs, Sabres and Flames even as they sort out early-season goaltending issues.

Reality: David Pastrnak and Brad Marchand rank first and second with 30 and 28 points, respectively. Tuukka Rask is one of the best in the NHL with a .936 save percentage. Father Time hasn’t come for the Bruins, yet, and they’re still the team to beat in the East.