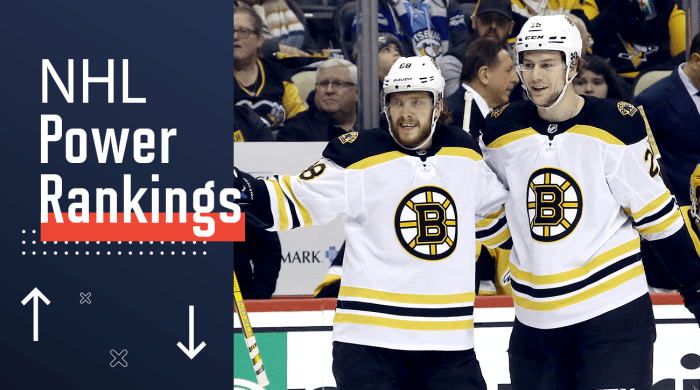 With the season almost two-thirds complete and the All-Star break finished, the NHL is entering the final stretch of the season with most team reaching the intersection of preparing for the postseason or packing up for next year. Some teams are positioned better than others—like the Capitals, Blues and Lightning who don’t have to make any major changes compared to bubble teams like the Jets, Golden Knights and Sabres—but every team needs something. This is how we see teams stacking up this week with an eye on what each team needs for the rest of the season:

Biggest need: Luck. With a league-low 28 points, the Red Wings have a comfortable lead on last place and could finish with fewer than 60 points at season’s end. Detroit needs the lottery to fall its way—only two of the previous five last-place teams have been awarded the No. 1 overall pick.

Biggest need: Assets. Over 30% of the Kings total cap space is locked into Anze Kopitar, Drew Doughty and Jonathan Quick through the 2022–23 season. L.A. has only one extra draft pick outside of its own in the next three drafts—the Flames’ 2020 fourth-round pick—and could use a boost to its rebuild.

Biggest need: A franchise goaltender. Since Martin Broduer left New Jersey in 2014, the Devils have ridden Cory Schneider, Keith Kinkaid and MacKenzie Blackwood to mixed success. Schneider hasn’t won a game since last March, Kinkaid is with Montreal and Blackwood has been good, not great, for the Devils this season. With Schneider toward the end of his contract and Blackwood about to become a restricted free agent, the Devils are hoping their 23-year-old netminder will be their long-term solution.

Biggest need: Smart decision-making. GM Pierre Dorion said at the end of last season that the Senators should be a playoff team in 2021. The franchise isn’t there, yet. Ottawa has a bounty of draft picks but only has seven players on its current roster that are under contract for next year. That’s a lot of decisions to make and the Sens can’t rebuild forever.

Biggest need: Franchise direction. The Ducks missed the playoffs last year for the first time in six seasons, but the team also isn’t in a position to return to contender status so soon. Ryan Getzlaf has one year on his contract after this season and, after that, Anaheim won’t have much left from its glory days.

Biggest need: Something different in net. The Sharks have the worst 5-on-5 save percentage through the last four seasons combined. Aaron Dell has been better since usurping 1A duties, but he’s 30 years old and an unrestricted free agent while San Jose still owes Martin Jones $23 million through 2024, with a modified no-trade clause tacked on.

Biggest need: Patience. Thanks to Artemi Panarin’s scorching season, the Rangers have a small, tiny, barely existent chance of making the playoffs. But, New York isn’t completely out of the rebuild and holding fast onto Chris Kreider would saddle the team more in the long term than it would help them in the short term. Let players like Adam Fox, Tony DeAngelo, Kaapo Kakko and Igor Shesterkin gain experience and save playoff hopes for a later date.

Biggest need: Realistic expectations. The Wild haven’t won a playoff series since 2015 and haven’t finished first in the Central Division since the 2007–08 season. It’s been a long time since Minnesota came close to a Stanley Cup and once former GM Paul Fenton left in the offseason, the feeling was that Bill Guerin would have some work to do. That shouldn’t change with the Wild on the edge of the playoff hunt and taking time to build, earnestly, is better than a decade of first-round exits.

Biggest need: Stick with Robin Lehner. Chicago’s defense is a work in progress but Lehner is one of the few things preventing a deluge of goals, plus he can be the team’s netminder of the near future if GM Scotty Bowman moves on from Corey Crawford.

Biggest need: Make a decision on this season. The Canadiens are 10 points out of a playoff spot with zero games in hand. The Canadiens have some weaknesses on defense, but they’ve been almost good enough to contend since Claude Julien took over.

Biggest need: Repair the blue line. The Jets are 51 games into the season and there’s still no sight of Dustin Byfulgien. Whether or not he returns, Winnipeg’s defense has allowed the most high-danger shot attempts against per 60 minutes and relied on Connor Hellebuyck to bail them out. That’s unsustainable if the Jets want to make any sort of playoff push.

Biggest need: Fix the penalty kill. The Predators struggled when down a skater early in the season but now it’s worse: Nashville has a 63% penalty kill in its last 15 games. It showed some signs of progress in a win against Buffalo right before the break, and any overall improvement would help a Preds team that hasn’t had issues with scoring goals this year.

Biggest need: Contentment. Expectations were low heading into the season—rightfully so after the departure of the team’s top three stars—but now the Blue Jackets are in a playoff position and have gone on a tear despite facing numerous injuries. That’s something to enjoy and, if Columbus ever falls back down to Earth, not to be taken for granted. The Blue Jackets have given fans more than they could ask for coming into this season.

Biggest need: Clarity for its goaltending situation. The Flames performed the same song and dance last year—Dave Rittich was solid but Mike Smith ultimately earned the playoff gig. Now, Cam Talbot is Calgary’s latest hot goaltender even though coach Geoff Ward gave Rittich the last few starts heading into the All-Star break. The Flames aren’t a lock to make the playoffs and have less room for tinkering with their goaltenders until they find the right one.

Biggest need: Production from its top players. With goaltender Darcy Kuemper and defenseman Niklas Hjalmarsson back in the lineup, the Coyotes begin to reestablish its defensive fortitude. Taylor Hall has been producing since he arrived in the desert but now Nick Schmaltz and Clayton Keller combined have one point in their last seven games.

Biggest need: A backup goaltender that isn’t Mike Smith. The Oilers could use help on the third line, too, but Mikko Koskinen has cooled off and Edmonton’s tandem (ranked fifth-worst) doesn’t inspire a ton of confidence. If GM Ken Holland can wrangle in a younger goaltender—like Alexandar Georgiev—even better.

Biggest need: Improved play in its own end. The Golden Knights haven’t been bad defensively, but they haven’t been as good in their own zone as in previous seasons. Vegas ranks 20th and 22nd, respectively, in high danger attempts against and expected goals against per 60 minutes and modest defensive improvements would help lift a team benefitting from Max Pacioretty’s resurgence.

Biggest need: Consistency. The Flyers have made a habit out of stringing together a couple of good wins against the league’s top teams, only to lose the next three or four in a row. Philly is one point out of a playoff spot and has the fourth-hardest strength of schedule the rest of the way.

Biggest need: Continued above-average goaltending. Jacob Markstrom and Thatcher Demko have given Vancouver the league’s 13th-best team save percentage. That’s not outstanding, but it could be a lot worse because Vancouver’s defense hasn’t made work easy for either goaltender.

Biggest need: Sergei Bobrovsky to play like a $70 million goaltender. The Panthers have scored more goals per game than every other team in the league, but they also rank 25th in goals against per game (3.27) and even-strength save percentage (90.11%). Bobrovsky stole a series from the Lightning and he can turn Florida into more than an offensive juggernaut if he recaptures last postseason’s magic.

Biggest need: The top offensive weapons to produce at even strength. Tyler Seguin, Jamie Benn and Alexander Radulov have a combined 18 goals at 5-on-5. Florida center Noel Acciari has one fewer by himself. It hasn’t hurt them so far, but the playoffs will demand more than Vezina-quality goaltending from Ben Bishop and a career year from Roope Hintz.

Biggest need: A third-line center who can add a scoring punch. The Islanders rank 19th in power play (19.5%), 21st in goals for per game (2.86) and 22nd in expected goals for per 60 minutes (2.30). Barry Trotz’s Isles don’t need to be an offensive juggernaut but the team stalled out in last season’s conference semifinals, never scoring more than two goals in a sweep to the Hurricanes.

Biggest need: The defense to step up in wake of Dougie Hamilton’s injury. There’s no one-for-one replacement for Hamilton’s 14 goals—tied for second-best in the NHL when he went down with a broken left fibula—or his contributions in his own zone. However, the Hurricanes d-corps is one of the best in the league and a player like Jake Gardiner is capable of filling in the gaps left behind by Hamilton’s absence.

Biggest need: Mend the defense. With Morgan Rielly unlikely to go on long-term injury reserve for the rest of the season, it’s going to be even harder for GM Kyle Dubas to bring in outside help. Jake Muzzin’s return should help, otherwise the Leafs will be counting on Justin Holl, Rasmus Sandin and hoping for Tyson Barrie to return to last year’s form.

Biggest need: Become buyers at the trade deadline. The Avalanche have more cap space ($6.77 million) than any team other than the Blue Jackets and there’s no reason not to add another piece to gear up for a playoff run.

Biggest need: To stay healthy. Penguins players have missed over 180 combined games this season—more than any other team in the league—but both Sidney Crosby and Evgeni Malkin are healthy and back in the lineup together. Now, Pittsburgh has to stay healthy. That hasn’t always been easy.

Biggest need: Stay the course. Unlike last year, Tampa Bay faced moderate amounts of adversity early in the season and hasn’t bulldozed its way through the rest of the league. The Lightning’s offense has been among the best throughout the season, the defense is improving and Andrei Vasilevskiy’s .962 save percentage, 1.13 goals against average and 7-0-0 record since the New Year read like Vezina-worthy numbers. Adding depth to ward against injuries can’t hurt.

Biggest need: A top-six forward. Vladimir Tarasenko is reportedly inching closer to his return from shoulder surgery but if he doesn’t come back in the regular season, grabbing a player like Chris Kreider would give the Blues a lift heading into the playoffs. Other than that, St. Louis doesn’t have any huge holes to fill.

Biggest need: Braden Holtby or Ilya Samsanov to force Todd Reirden’s hand. Samsonov has jumped into the league’s lead in goals against average while Holtby is in the middle of one of the worst 10-game stretches of his career. Complicating matters even more, Holtby set to become an unrestricted free agent in July. In a vacuum, Samsanov taking over as the Caps’ lead goalie and making Holtby expendable would help Washington’s long-term plans, but Holtby turning his year around would work as well in the reality of this season.