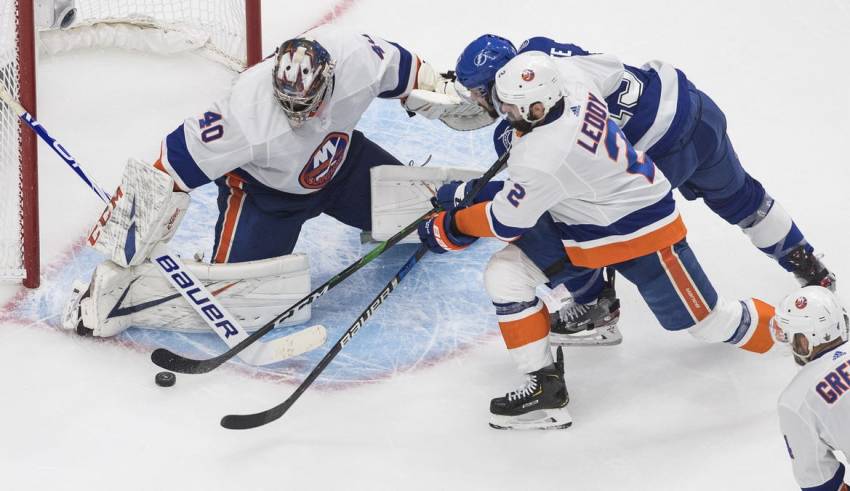 EDMONTON, Alberta (AP) — Nikolai Khabibulin wakes up in Yekaterinburg to watch NHL playoff highlights and beams with pride at the saves made by so many Russian goaltenders.

For the first time, there are three Russian starting goaltenders in the conference finals and two will face off in the final. Sixteen years after Khabibulin became the first Russian goalie to win the Stanley Cup, Anton Khudobin of the Dallas Stars, Andrei Vasilevskiy of the Tampa Bay Lightning and Semyon Varlamov of the New York Islanders are following his lead and showcasing the country’s strength between the pipes throughout multiple generations.

“It’s actually quite interesting to experience this because it has never happened before,” Khabibulin said. “I would’ve never thought this would happen, but it is happening.”

From Hall of Famer Vladislav Tretiak in the Red Army days to Khabibulin and Evgeni Nabokov last generation and guys now like Vasilevskiy, Varlamov and Florida’s Sergei Bobrovsky, Russia’s hockey history is full of strong goaltending. After a several-year gap caused by the downfall of the Soviet Union, the nation is again producing some of the best in the world with young prospects Igor Shesterkin, Ilya Sorokin, Ilya Samsonov and 2020 draft-eligible Yaroslav Askarov making up the next wave of stars.

“It’s crazy now we have all those goalies because before that was our problem, but now we have so many great goalies,” Washington Capitals winger Ilya Kovalchuk said. “It says that hockey system is growing in Russia. The goaltenders who’s retired, they help the system to grow those young kids as good players. It’s great to see that many guys come to the NHL like Vasilevskiy, Varlamov and all those guys, Bobrovsky. They’re all dominating. It’s great.”

Nabokov, who lead goalies born in the Soviet Union or Russia with 353 regular-season and 42 playoff wins, is helping that process as goalie coach of the San Jose Sharks. While he deals with professionals, he notices Russian and Finnish goaltending coaches back home teaching the position to very young players.

“It’s got a little bit more organized,” Nabokov said. “Now each team have a goalie coach and tons of camps throughout summer where you can go and be well-detailed and they prepare kids technique-wise from early ages.”

The three Russian goalies who made it the furthest in the playoffs have very different techniques. Vasilevskiy is the 6-foot-3 reigning Vezina Trophy winner with the perfect blend of fundamentals and athleticism, Varlamov is the poised veteran who can make difficult saves look easy and Khudobin is the undersized throwback goalie who teammate John Klingberg joked is “swimming all over the crease” and somehow stopping the puck.

As Khudobin said after a game a couple of years ago, “I like to save the pucks.” Khabibulin called Khudobin a modern version of three-time Cup winner Martin Brodeur because he plays standing up unlike almost everyone else who relies on the butterfly position to make stops.

“I was looking at some highlights of him, and it’s somebody took a goalie from 1990 and put him in a time machine and got him into 2020,” Khabibulin said. “But nevertheless he does the job.”

Maybe without Khabibulin’s invitation to take part in an online goalie school chat, Khudobin wouldn’t be one of the top performers in his first NHL playoff action at age 34.

“He was really losing interest, I guess, because of the pandemic and we started YouTube channel and started talking on Zoom with hockey players and just talk about hockey,” Khabibulin said. “He was one of the guests. We had a great talk. We usually do it for about an hour, hour 15 and with him it was almost two hours.”

Since getting the starting job when Ben Bishop was injured, Khudobin has gone 12-6 with a 2.54 goals-against average and .921 save percentage and backstopped the Stars into the Stanley Cup Final. Two years after signing Khudobin to a two-year contract, general manager Jim Nill joked he wished it was five now.

The Islanders signed Varlamov last summer to a four-year deal to replace Robin Lehner, who was the only non-Russian goalie in the final four wit Vegas. Varlamov had never gone this deep in the playoffs before and is a major reason New York reached the Eastern Conference final for the first time since 1993.

“Semyon, he was a No. 1 goalie, then he was a little bit off, then he was No. 1 again, kind of like nobody really paid attention to him,” Khabibulin said. “And now he’s there.”

That’s Russian goaltending in a nutshell, and postseason is evidence of that. Vasilevskiy, Varlamov, Khudobin, Bobrovsky and Shesterkin have combined for 37 wins with a 2.28 goals-against average and .921 save percentage.

Nabokov credits this success and Russia’s goalie renaissance to a mix of more coaching and pure talent that’s possible now in the decades since the fall of communism there.

“The country went through certain things and people just didn’t pay attention to hockey that much: You can’t run hockey schools, you don’t have enough coaches, you can’t hire enough coaches,” he said. “Russian goaltenders always been good, but it’s been a window where it’s kind of dropped off a little bit and now it’s back because we always had good hockey minds.”