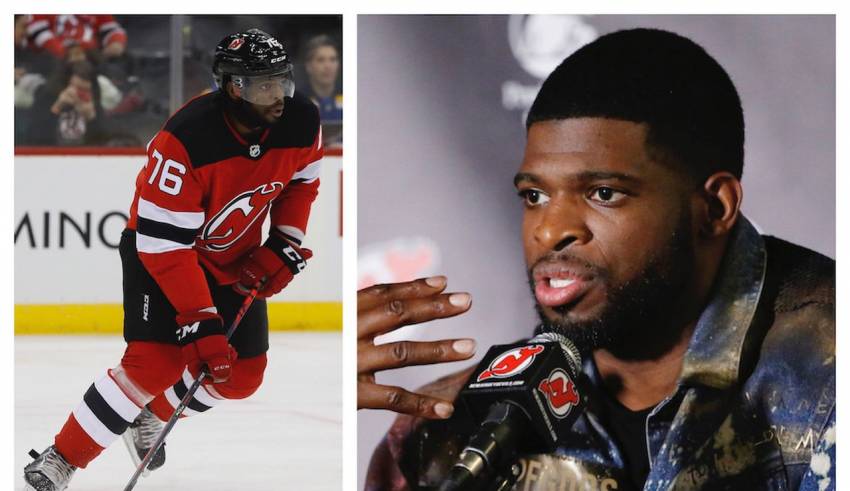 Devils defenseman P.K. Subban showed a ton of courage right after the final horn of his first NHL game challenging one of the toughest and nastiest players ever.

Or maybe it was a case of naive stupidity skating up to Philadelphia Flyers defenseman Chris Pronger during a post-game scrum, grabbing the 6-foot-6 future Hall of Famer and declaring, “I’m not scared of you.”

This was the wrong guy to pick a fight with, and Subban is lucky that he didn’t get a stick to the ribs or glove to the eyes.

“I came flying in like I was gonna do something and I wasn’t gonna do anything,” Subban recalled in an NHL-produced video that was tweeted this weekend.

“He looked at me and said, ‘Oh, my God, your breath smells bad,” Subban said.

Just in case Subban didn’t get the message, Pronger repeated it a few times.

“He let the other two guys go and he just skated away and kept yelling at me how my breath stunk,” Subban added. “I was really embarrassed, but it was fun.”

The next night, Subban faced Philly again in Montreal, he picked up another assist in another Canadiens loss, but this time he was smart enough to stay away from Pronger.

Those were Subban’s only two NHL games in 2009-10, but his career began taking off the following year when he was one of the league’s top rookie blueliners while scoring 14 goals and 38 points in 77 games for the Habs.

Subban went on to become a three-time All-Star and win a Norris Trophy as the league’s top defenseman during his Montreal years, and he was a big contributor to the Nashville Predators’ Stanley Cup Finals team in 2016-17.

Now 31, Subban ‘s career has been in a downslide for two seasons. He established a new low for points in 2018-19 scoring 31 in 63 games with Nashville, then he stooped to 18 points in 68 games with a career-worst minus-21 plus-minus rating this season, his first with the Devils.

Subban is confident that he’ll rebound next season.

“In my opinion, I’m still one of the top defensemen in the league,” Subban recently told Men’s Journal. “When I’m in the biggest games, the biggest moments, I feel that I’m one of the players that teams would love to have on their team and that they can rely on, and that’s always been my game.

“I definitely believe that there’s better things to come for me in my career, whether it’s winning a Norris Trophy or Stanley Cup.”

Whatever happens in the future, it’s already been a whirlwind for Subban, and it all started the night that Pronger shamed him for having bad breath.

“That was my welcome to the NHL,” Subban said.

Get Devils Insider text messages from reporters: Cut through the clutter of social media and communicate directly with Devils writer Randy Miller. Plus, exclusive news and analysis every day. Sign up now.

Our journalism needs your support. Please subscribe today to NJ.com.

Randy Miller may be reached at rmiller@njadvancemedia.com. Follow him on Twitter @RandyJMiller. Find NJ.com on Facebook. Tell us your coronavirus story or send a tip here.