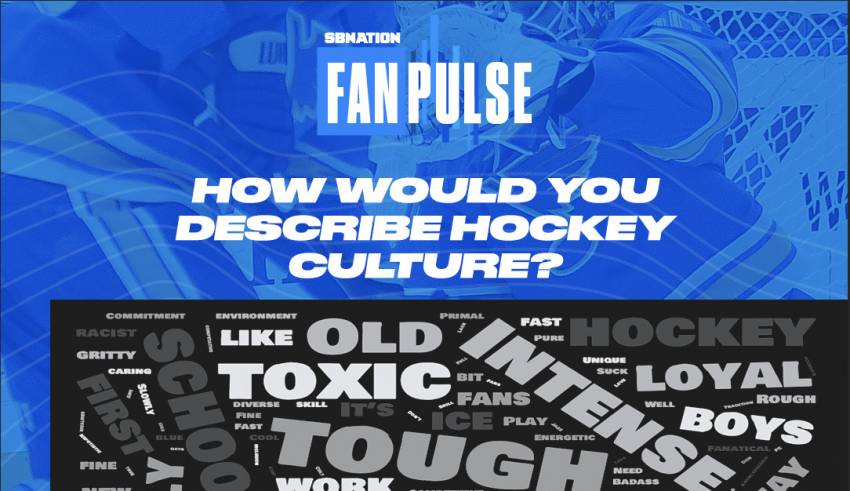 It’s safe to say that it hasn’t been the best few months for the NHL’s optics, and even that of ice hockey as a sport.

Starting with the events leading up to the firing of Don Cherry from CBC’s Hockey Night in Canada, the normative behaviors of hockey culture have been on trial, and already, guilty verdicts have been dealt to coaches and people in positions of leadership across all levels of the game. Fans, analysts, writers, the media, and players alike are starting to take a look at hockey culture under the microscope, and aren’t always finding the results to be satisfying:

Words like tough, gritty, and intense, while mainly descriptive of the sport itself, find themselves manifested in the very way hockey players are both treated and expected to act. This has had impact on and off the ice, and stories being shared by former players about how they were treated show how the culture of the game has turned toxic.

Partly, though most obviously, the toxicity exists in the form of old-school mentalities on toughness and manhood. These attitudes re-enforce themselves through generations, and only really impact players negatively.

This isn’t to say, however, that everything about hockey culture is bad. Words like loyal, fun, commitment, and family show that hockey culture has another side to it which can foster the best in the individuals who play it.

Just look at the Flyers.

It becomes more openly evident which each passing day that what Kevin Hayes said about the club is true, that they are “the tightest team” he has ever played on. The sense of camaraderie and family, reminiscent of the Flyers of old, has come back with this team. From an outside perspective at the least, it appears as if every player in the locker-room genuinely cares for everybody else in it as if they were family.

Additionally, and perhaps more importantly, the long-held stigma on vulnerability seems to be eradicated in the Flyers culture. Again, this is all from a very outside view on the team, but seeing stories on the roles Chris Stewart and Kevin Hayes play in the team’s leadership, both on and off the ice, really struck a chord with me. The following is a quote from Chris Stewart on his mentoring of Nolan Patrick during his struggle with migraine disorder:

I’m just trying to be a positive reinforcement in his life. You can tell, he wears a lot on his shoulders and he wants to play. He has his good days and his bad. Our worst day is someone’s best day…We talk all the time, when we’re on the road, we keep in contact, like to check in on him every couple days about the stuff that he’s going through. Let him know that I’m here, just be a shoulder to lean on, to talk to, an open door and that’s how we’ve been.

This is the kind of attitude that needs to be more present in hockey culture. Too often hockey players are told that in order to succeed, one needs to ignore such issues and simply “suck it up” instead of talking about the various things in life that lead to negative consequences both mentally and physically. This often comes from above, from coaches and others in leadership roles.

Tackling the toxicity in hockey culture requires both the outing and subsequent departure from coaches and other individuals who propagate the toxicity, and perhaps most importantly yet, the furthering of the positive things hockey can foster.