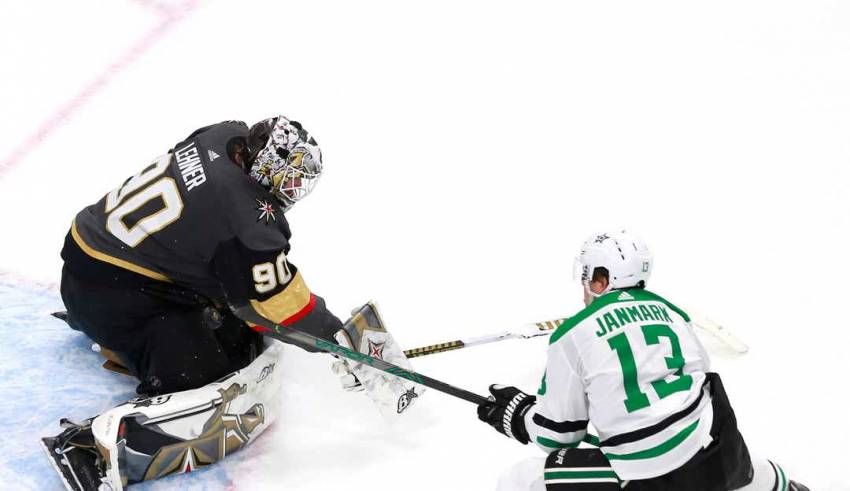 And then there were four.

The conference finals get underway Sunday with the Vegas Golden Knights taking on the Dallas Stars in the West (8 p.m. ET, NBC), while the Tampa Bay Lightning will face the New York Islanders on Monday (8 p.m. ET, NBCSN) in the East. Both series will take place in the Edmonton bubble.

The Islanders haven’t been this far since 1993, though their coach, Barry Trotz, got to the third round with the Washington Capitals in 2018, where they beat the Lightning.

The Golden Knights, the lone final four team without a Stanley Cup title, reached in 2018 in their first season in the league and the Stars got this far in 2008.

QUEST FOR THE STANLEY CUP: Scores, schedules in the bubble

SUSPENDED: Ryan Reaves to sit one game for illegal check to head

Jimmy Hascup: Lightning in six. The best way to describe the Lightning since the season resumed is a team on a mission. Tampa Bay has gone 10-3, wiping out both playoff series in five games and doing it without captain Steven Stamkos. Barry Trotz’s group could frustrate with its defensive style, but the Lightning are too deep and talented – and, most important, now are a more complete team that makes opponents earn all 200 feet of ice. They’ve scored more than three goals three times, while giving up more than two only four times.

Mike Brehm: Lightning in six. Trotz might have bested the Lightning before, but he’ll have a tougher time against this version, which added gritty players and depth after last season’s shocking first-round sweep by the Columbus Blue Jackets. The Lightning are driven by that loss. The Islanders will frustrate them with stingy defense and productive forwards, but the Lightning have better skill up and down the lineup, including awards finalists in defenseman Victor Hedman and goaltender Andrei Vasilevskiy.

Jace Evans: Lightning in six. The health status of Nikita Kucherov is of some concern – and who knows if Stamkos will even play a game in these playoffs at this point – but in dispatching the Bruins in five games, Tampa received something that has been in short supply in the bubble: time off. That stands to benefit the deep Lightning vs. an Islanders team that had to play seven games, with multiple overtime contests.

Hascup: Golden Knights in six games. The Golden Knights did everything right against the Canucks except translate enough scoring chances into goals, which made for a close series. This experience will help them now against a better overall team defense than Vancouver’s. Their puck possession, uptempo style should lead them to the Stanley Cup berth, though they will need to create more closer-ranger chances.

Brehm: Golden Knights in six. The Stars have rediscovered their offense, but they have given up more goals than they scored in the postseason. That could be an issue against the Golden Knights, who can match the Stars’ offense but have better defensive numbers. Both teams get offense from their defense, with Dallas’ Miro Heiskanen (21 points) the top scorer among those still playing and Vegas’ Shea Theodore chipping in 16 points.

Evans: Golden Knights in five. Don’t let their second-round series fool you: The only thing that stood between the Golden Knights and another short series was an absolutely amazing performance in net by Vancouver goalie Thatcher Demko in the final three games. Otherwise, Vegas was absolutely dominant, racking up lopsided shot totals while Robin Lehner secured three shutouts in the series. Dallas is more experienced, but Vegas is playing the best of any team remaining in the Stanley Cup playoffs. The Golden Knights should advance to the Final for the second time in three seasons.