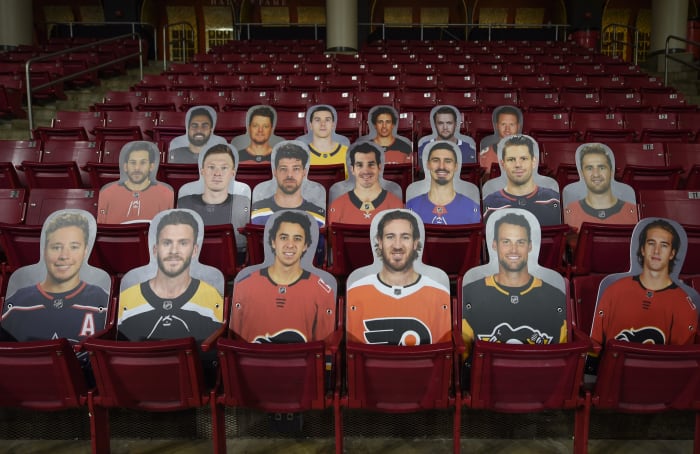 In a few short days, the NHL’s abbreviated 2020-21 regular season – so abbreviated, in fact, that there’s not a 2020 portion to the schedule – will get underway. That’s the plan, at least, though recent developments with the Columbus Blue Jackets and Dallas Stars are the latest reminders that COVID-19 doesn’t care one iota about the NHL’s intended schedule (or anything else).

But let’s choose hope and optimism, and believe that the NHL will be able to navigate its 56-game slate, set to start on Wednesday and conclude on May 8. We know it will be a season unlike any other, played out during a global pandemic amid empty arena seats. The schedule has been shortened, the divisions have been altered. Joe Thornton’s a Maple Leaf and Zdeno Chara’s a Capital. Strange days, indeed.

The top four teams in each of the newly formed divisions will make the post-season. Let’s take a look at the playoff contenders and pretenders, aided by over/under point projections courtesy of BetOnline.ag.

Bolts or bust: Tampa Bay had an NHL record-setting season two years ago and won the Stanley Cup last year. They’re in. After that, the Central Division features five competitive teams vying for the three remaining playoff berths. Dallas, surely, will return to the post-season after going all the way to the Cup final in September. Carolina has been on the rise for a couple of years and all signs indicate they’ll continue to ascend. If the Stars and Hurricanes do indeed qualify, that leaves one spot for Columbus, Nashville and Florida. The Blue Jackets have been moving in the right direction under John Tortorella, the Predators have started going the other way after years of contention, and the Panthers get another chance to prove they’re as good on the ice as they appear on paper. Pick the Blue Jackets, but don’t be surprised if the Preds or even the long overdue Panthers push their way in. Chicago and Detroit, meanwhile? Original Six credibility can’t overcome their draft-lottery ability.

Chara power shift? This could be the most tightly contested division this season, with six playoff hopefuls – seven if you’re a Buffalo believer – battling for four spots. Boston has been a Cup contender for a decade and deserves top billing until someone bumps them off. But you have to wonder whether the departure of Chara will mark a turning point for the aging Bruins. Philadelphia and Washington join Boston on the inside track for the playoffs, with Pittsburgh, the Islanders and Rangers close behind. Buffalo and New Jersey are the weak links, but the Sabres are busting for a post-season berth and the young Devils should at least take a step forward this season.

Canadian content: We know for sure that Canada will have a team in the final four, and six of the seven clubs from The Great White North likely feel they’re the one that’s going to get there. Toronto is the odds-on favorite (insert the requisite plan-the-parade joke here), but there’s little that separates the Leafs from Edmonton, Montreal, Calgary and Vancouver. Even Winnipeg, a top-flight contender just a couple years ago before enduring a blueline exodus, harbors hopes of advancing. Bottom line, the Leafs, Oilers, Canadiens and Flames have the edge, but it’s razor-thin. The Canucks have been a pleasant surprise the past couple years, but they lost No. 1 goalie Jacob Markstrom (to Calgary) in free agency, while the Jets need Connor Hellebuyck to deliver another Vezina Trophy-worthy season. That’s a big ask. Ottawa, meantime, needs another season or two to grow up. Put the Senators in the lottery for the No. 1 pick alongside Chicago and Detroit.

Two for the money: If you believe the projected point totals, the West Division features two of three best teams in the NHL, with Colorado and Vegas joining Tampa Bay at the top of the mountain. And to be sure, the Avs and Golden Knights are loaded for a Cup run. If all goes according to plan, they finish 1-2 in the division, win their respective first-round playoff series and then face off in Round 2 for the right to move on to the semis. There’s a drop-off after the two heavyweights, however. St. Louis lost captain and linchpin defenseman Alex Pietrangelo (to Vegas) in free agency, Vladimir Tarasenko is rehabbing a shoulder surgery and Alex Steen retired. Minnesota and Arizona benefit from the relative weakness of the division and will likely go down to the wire for the final playoff spot. The NHL’s three California teams, meanwhile, are lined up for lottery tickets.