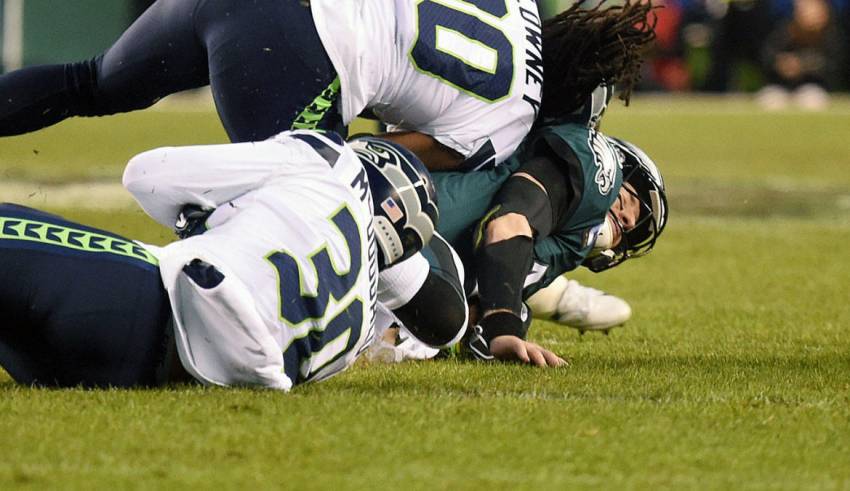 Carson Wentz left the Philadelphia Eagles‘ playoff loss to the Seattle Seahawks after notifying team doctors of a concussion suffered in the first quarter. While some have labeled Wentz injury prone or soft for taking himself out of the game, the NFL‘s chief medical officer applauded Wentz for the decision to remove himself from action.

“I think what Carson Wentz did is heroic and should be highlighted as an example of how an unbelievably skilled and competitive athlete understands the seriousness of concussion injury and is willing to honestly report it and receive the care that he needs independent of his desire and drive to continue to participate in the game,” Dr. Allen Sills said Thursday, via the Associated Press. “Having a concussion and playing through it is not about toughness. That’s demonstrating a lack of understanding of the severity of the injury. So I applaud Carson Wentz for understanding how serious this injury is and for getting appropriate care that he needs.”

Wentz went 1 of 3 for four yards passing in his postseason debut before being knocked out by Seahawks defensive end Jadeveon Clowney on a helmet-to-helmet hit that did not result in a penalty. The Eagles quarterback actually played a few more snaps before notifying the Eagles of his condition, which led to an evaluation in the medical tent. Wentz headed to the locker room and was ruled out shortly after.

“It’s a great example to players at all ages and levels that you only have one brain and you shouldn’t take chances with a brain injury,” Sills said. “Brain injuries are different than other injuries. Anytime someone has a sprained ankle, you can see their ankle swell up or they dislocate a finger and you can see the finger pointing in the wrong direction. You can’t see a brain injury from the outside, but that does not make it any less severe or any less dangerous to the recipient than any of those other injuries.”

Wentz certainly listed to the advice of Eagles head coach Doug Pederson on the importance of reporting concussions. In December, Eagles linebacker Kamu Grugier-Hill left a game against the Miami Dolphins after the first play from scrimmage when he collided with Dolphins wide receiver DeVante Parker. He returned to the game and didn’t tell the Eagles about the concussion when the symptoms remained three days later.

“We stress how important it is for our players to, one, either self-police themselves and/or a teammate, kind of say something to a medical team member of this importance,” Pederson said. “We know how important head and neck injuries are to our league and to just the person, the player himself and the well-being of the player.

“I’ll reiterate to our team again obviously the importance of reporting injuries, regardless of what type of injury it is. But I just want him and the guys to understand that I’m disappointed in this decision.”

The Eagles certainly were on top of the health and well being of their franchise quarterback, demonstrating to the NFL how severe they take head injuries. Perhaps all the other NFL teams will follow their example.