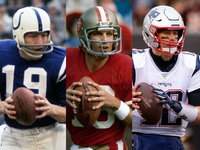 Judy Battista served on the 26-person blue-ribbon panel that voted on the NFL’s All-Time Team, a collection of the 100 greatest players and 10 greatest coaches in the league’s 100-year history. Different positions from this dream team have been revealed each Friday night on NFL Network, with Judy reviewing the selections in this space. This week’s reveal was the series finale, which included the following 10 quarterbacks:

A quick glance at the entire NFL All-Time Team makes clear one overriding theme: It was extremely difficult to make the cut as an active player, in large part because of how difficult it is to assess a career when we don’t know how it will end. It underscores the dominance of the very few active players who have made it: kicker Adam Vinatieri, receiver Larry Fitzgerald and tight end Rob Gronkowski, who was still a year away from retiring at the time of the voting in mid-2018.

Putting Tom Brady on the list was one of the easiest choices of the entire balloting process, of course. Winner of six Super Bowls, catalyst of the greatest dynasty in league history, Brady was a unanimous choice. Whether Brady retires after this season or plays to his stated goal of 45 years old, he takes his rightful place along with the other unanimous choices at QB: Joe Montana, Johnny Unitas and Otto Graham, who, in 10 seasons with Cleveland in the 1940s and 1950s, won seven championships.

Despite the current wealth at the quarterback position, no other active signal-caller made it, although it is easy to imagine a 125th-year team including a few of them, especially Drew Brees. Brees currently holds the NFL record for career pass completions, career completion percentage, career passing yards and career touchdown passes, although he did not hold those spots when the voting took place for this team. Brees won a Super Bowl, has been the league’s Offensive Player of the Year twice and has routinely been one of the top handful of quarterbacks each season. He has, perhaps surprisingly, never been the league’s Most Valuable Player.

But Brees was probably the victim of the same forces that kept other great active players off the team. With the mandate to select a team that represented the full 100-year history of the NFL, it was especially difficult for current players to make it, because those who played in much earlier eras had to be accounted for, while current players couldn’t offer a complete career for consideration. The entire deliberation for the all-time team was a battle against recency bias: the belief that the players who dazzle us now are far superior to those who played earlier in the league’s history.

And, as at other positions, the field of quarterbacks was crowded and superb. Consider the rest of the all-time quarterbacks: Sammy Baugh, John Elway, Peyton Manning, Roger Staubach, Brett Favre and Dan Marino. They all belong there. Had there been a separate team for two-way players, Baugh, who led Washington to two championships, led the league in completion percentage eight times and passing yards four times and also punted and played tailback, would surely have been on it. That would have created an opening that perhaps Brees would have filled, at least on my ballot. It was a logjam that the panel tasked with selecting the team encountered over and over.

Even without Brees, the final list is dominated by quarterbacks from the two great eras at the position. The 2000s are considered the second golden era of quarterbacks and three of the 10 come from the 20 years of this millennium, Brady, Manning and Favre. Manning won five league MVP awards, is the only quarterback to win Super Bowls for two teams, holds the NFL’s single-season record for passing yards and passing touchdowns and had 4,000 passing yards a record 14 times. Favre is the only winner of three straight MVP awards, he retired as the career leader in passing yards and passing touchdowns and he made a record 297 starts.

The first golden age was the 1980s, highlighted by Montana, the winner of four Super Bowls with the San Francisco 49ers. The legendary quarterback draft of 1983 placed two players on the list, Elway and Marino. Marino is the only member of this quarterback class who never won a championship. His passing numbers, though, were outsized and far ahead of what others were doing at the time. He was the first quarterback to throw for 5,000 yards in a season, and when he threw 48 touchdown passes in 1984, it destroyed the previous record of 36. At the time of his retirement, he held more than 40 single-season and career passing records — and he is still regarded as perhaps the greatest pure passer the game has ever seen.

The remaining two members of the team are no less iconic. Staubach led the Cowboys to four Super Bowl appearances, winning two. He led the league in passer rating four times and retired as the highest-rated quarterback. And he, quite literally, invented the Hail Mary with a game-winning touchdown heave to Drew Pearson in a 1975 playoff game, solidifying Staubach’s reputation for last-second heroics.

And Unitas — “Johnny U” — is regarded as the prototype for the modern franchise quarterback, boasting a strong arm, popularity among fans and a high-profile media presence. A two-time NFL champion and three-time MVP, Unitas threw at least one touchdown pass in 47 straight games, a record that stood a staggering 52 years — until it was broken by Brees. 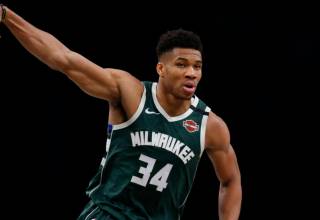