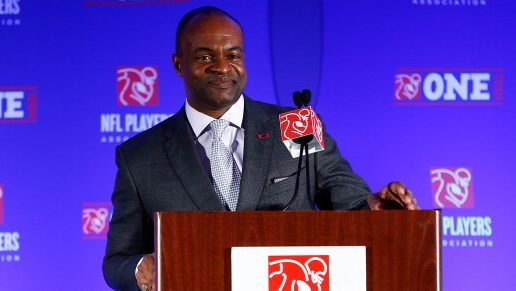 The Broncos played a game without a quarterback because of COVID-19 contact tracing. The 49ers played a game after putting four key players, including three receivers, on the COVID-19 list a day before kickoff. The Ravens were missing a dozen starters and key contributors, including 2019 NFL MVP Lamar Jackson, in Week 12 despite their game against the Steelers being rescheduled three times. The Browns played Sunday’s game with only one receiver available from their 53-player roster.

The results of those games was predictable.

The NFL said all along, though, that it would not reschedule games for competitive reasons, only medical reasons. It will take the same approach in the postseason, and the NFLPA is in lockstep in scheduling decisions being based only on health and safety.

“I think it’s a very slippery slope to either read into or to start making decisions motivated by competitive balance,” NFLPA executive director DeMaurice Smith said in a videoconference Tuesday. “I think once you start making those decisions, it becomes very difficult to manage and also very difficult in order to determine when to stop.

“I think what you’ve seen over 16 weeks is the league and the union work hard to make tough decisions but right decisions about player health and safety.”

NFLPA president J.C. Tretter is the Browns’ center, so he saw the results of the Browns’ top four receivers being deemed high-risk close contacts of linebacker B.J. Goodson, who generated a positive test Saturday morning.

The Browns lost to the Jets 23-16 on Sunday, which could end up costing them a playoff berth. They placed tight end Harrison Bryant and safety Andrew Sendejo on the reserve COVID-19 list Tuesday, with a big game against the Steelers looming Sunday.

“It’s definitely frustrating,” Tretter said. “Guys want to be out there, and that was one of the tougher things this year. Guys are competitors. Guys play through injury, through illness, but this is the year that that’s not possible. You can’t play through COVID. It’s not safe for the guys around you, and the choice is taken away from the player of [if] can you do it.

“It’s a hard no, and it’s a hard no if you’re a close contact. And that’s why following the protocols is so important — wearing your mask, wearing your Kinexon [tracking device] and physically distancing at the facility. If you do those three things, the odds are you’re not going to contract the virus and you will not end up on the high-risk close contact list. So following the protocols and having 100 percent compliance takes care of it all.”

The NFL informed teams today that it will continue daily testing and intensive protocols throughout the playoffs. The Management Council and NFL Players Association also agreed to unlimited practice squad elevations without a player having to clear waivers during the 2020 postseason.

During the regular season, a team could move a player to the active roster as a standard elevation only twice.

The NFL will not go to a neutral-site bubble or have mandatory local bubbles for the postseason, trusting its protocols work.

“I don’t think there’s a need for [a bubble or bubbles],” Smith said.

Few expected the NFL to play all 256 regular-season games without a Week 18 or without some cancellations, but it is five days from doing just that.

“We said from the beginning, it wasn’t about getting started,” Tretter said. “We felt confident we could get to the point of getting started. It was about staying started and continuing the season and finishing it at the Super Bowl. We are closing it on that goal. It’s going to need everybody to continue to comply with protocols and do the right thing and have 100 percent compliance, but every person that walks in that building I give a ton of credit his year.”